Once, twice, three times arrested
July 24, 2007
A central New York man hit the criminal justice trifecta, three arrests in three hours. Kevin Rich, 40, was charged early Sunday morning with soliciting money from people and loitering.
A little more than an hour later he was charged with disorderly conduct for stepping in front of a vehicle, causing the driver, an off-duty police officer, to slam on his brakes.
Around 2:30 that same morning, police say Rich was arrested a third time for taking money from people after telling them he ran out of gas and needed to get to another town.
Police say Rich has no car.
Rich was sent to the Madison County Jail and is due back in court later this week.
Posted by The Man at 7/25/2007 No comments:

The Drinks Are On Me.

A high-rolling businessman woke up with a bar receipt for £105,805 after he treated a group of friends to a lavish night out at one of London's most expensive nightclubs.
Over the course of seven hours at London's Crystal nightclub, the Middle Eastern banker is alleged to have splashed out on numerous super-sized bottles of champagne and vodka. 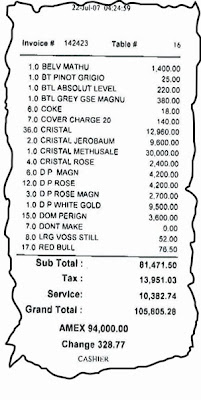 In total he is said to have bought an astonishing 102 bottles-worth of champagne and 11 bottles-worth of vodka. Included in the liver-busting round was a Methuselah of champagne (equivalent in size to eight normal-sized bottles) costing £30,000 and a single super-sized bottle of vodka costing £1,400. But at least the party didn't go too over the top: they also ordered six cans of Coca Cola and some Red Bull as a mixer.
ANOTHER BIG BAR TAB
Man spends $210,000 at the bar, in one night.
A Middle Eastern businessman spent over $210,000 in a five-hour, champagne- and vodka-fuelled spending spree in a London nightclub at the weekend. Fraser Donaldson, a representative of Crystal, a club favored by Prince Harry, said in 20 years working in the industry it was the biggest bill he'd seen from one customer. The unnamed big spender entered Crystal at midnight on Saturday with friends -- nine women and eight men -- and ordered a $50 bottle of white wine, a spokesman for the club said. But before long he was ordering magnums of Dom Perignon at $1,400 each and then called for a Methuselah -- eight bottles in one -- of Cristal Champagne at $60,000 and the party spread. The festivities ended with a "night cap" consisting of a Methuselah of Belvedere vodka, which cost $2,800. "He basically just said, 'keep the drinks flowing,'" the club spokesman said. When the party left at 5 a.m., the bill was 81,471.50 pounds, which with tax and service added amounted to 105,805.28 pounds -- $218,000. It included the cost of six Coca-Colas. » Article here

This is a look back at some of the crashes, accidents, stunts, mishaps, bloopers & calamities over the past few years of the internet.
Some of your old favorites will be here.
Posted by The Man at 7/25/2007 No comments: 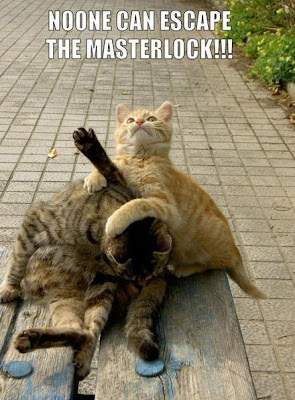 Girl calls sex assault hotline, gets sex hotline instead.
A young Florida girl who thought she was calling a sexual assault helpline got the complete opposite on the other end of the phone. The 8-year-old girl was upset about the inappropriate behavior of another child. So, her mother told her to call the number for the North Central Florida Assault Center listed in the phone book and on the Attorney's General's office website. The girl had actually called a sex hotline. "I convinced my daughter this phone call was going to help her, but it made things immensely worse," said the girl's mother, Karen Carter. It turns out the sexual assault helpline was bought by the company that runs the sex hotline. The number has since been taken off the Attorney's General's Website. » Article here
Posted by The Man at 7/25/2007 No comments:

Awesome Laser Illusionist
Posted by The Man at 7/25/2007 No comments: 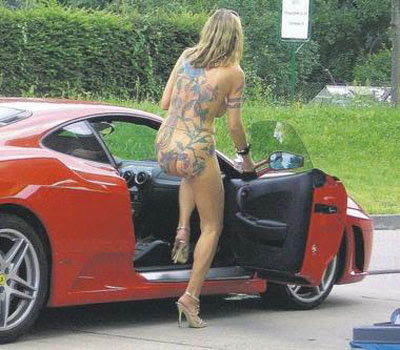 A mysterious blonde paid a visit to a petrol station shop in the small eastern German town of Doemitz on Sunday - wearing nothing but a pair of golden stilettos and a thin gold bracelet. The tall, slender woman strolled into the shop in the town of Doemitz on the warm afternoon and bought cigarettes, said petrol station employee Ines Swoboda."I wasn't surprised because she's come in naked before - she's a very nice woman," Swoboda said, adding none of the other customers was bothered. The woman could have faced charges of creating a public disturbance if anyone had complained. A quick-witted customer did, however, snap pictures of the woman believed to be about 30 years old as she walked back to a waiting Ferrari and climbed into the passenger seat. Several of those photos appeared in the German media on Monday.
Posted by The Man at 7/25/2007 No comments: