Parents are Disgusted with Son 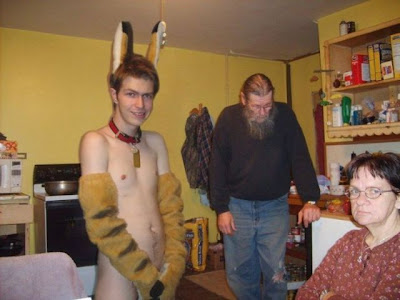 Robber fled when clerk demanded gun proof
Police in Massachusetts said a would-be robber abandoned his plans when a clerk demanded to see the gun he claimed to be concealing.
Investigators said Adam Alsarabi, 22, of Lawrence, Mass., allegedly approached a cashier at White Hen Pantry in Haverhill, Mass., at about 12:42 a.m. Friday and said he had a gun and wanted money from the register.
However, police said the suspect fled the store when the clerk insisted on seeing the gun and officers soon found him hiding in the woods. He was arrested without incident and police said they did not find a gun.
Detective Sgt. Robert Pistone cautioned citizens not to try to emulate the clerk's actions.
"We don't recommend this course of action," said. "Why take the chance with your life over the loss of money? There is no need to be a hero."
.
Store clerk just said "no" to crime.
The wannabe robber entered a Daytona Beach Kangaroo Express wearing a hoodie with a bandana covering his face just before 5 a.m.
He hadn't counted on one spunky clerk.
When the guy, who stood 6'2'', approached the counter, clerk Thomas Piepenburg told the man he had to uncover his face if he wanted to do business in the store.
He did his big bad crook thing and demanded all the money.
But Piepenburg thought he was joking and again asked him to remove the bandana.
Then he stepped back from the counter and told the crook that he wasn't getting anything.
It worked.
When the man realized he couldn't reach the register, he left the store.
.
Teller couldn't read robber's note
A would-be robber handed a bank teller in Oregon a note saying, "Need $300 or I'll kill you," but the teller couldn't read the handwriting, police said.
The teller at a Wells Fargo branch in Hillsboro, Ore., told the woman -- identified as Stephanie Martin -- she couldn't decipher the note. Martin then went to a counter and rewrote the note on a bank slip, police said
The teller hit a silent alarm, and the bank's manager appeared, asking how he could help Martin.
She told him she wanted to open an account
Police officers and FBI agents who arrested Martin said she was under the influence of drugs.
.
Boss shot worker over using the wrong toilet
A fuming boss shot one of his employees after he discovered they had used his private toilet.
Police said the raging manager pulled out his gun and blasted the unlucky worker in the leg after hearing of his cheeky toilet trip.
The 27-year-old boss was arrested and charged with attempted murder yesterday after the alleged attack in Durban, South Africa.
Cops said the row started when the suspect discovered the worker — a 25-year-old Malawian man — had used a toilet cubicle reserved for management.
A police spokesman said: "The man went to the toilet and on his return his employer asked him where he had gone to.
"He told him he was in the toilet and showed him the toilet he had used.
"The employer then drew out his gun and shot him once in the left ankle."
The alleged victim was today recovering at home from his injuries.
Cops said: "It seems he underestimated the strength of his employer's feelings on the matter of which toilet he should use."
.
Posted by The Man at 10/06/2009 No comments: