Man Falls Ill After Sucking Snake Venom From Dog's Nose
A Hawk Springs Wyoming man says he saved his dog's life after sucking venom from a rattlesnake bite out of the animal's nose. But a nurse at the hospital in Torrington later told Bobby Jenkins that's not a good idea. Jenkins says he began feeling ill after getting his dog, Tank, to a veterinarian. He went to the hospital and received a dose of antivenin. In all, Jenkins needed four vials of antivenin at a cost of $3,500 per vial. Meanwhile, Jenkins says his dog's head swelled up to three times its normal size. Tank had been bitten after running under some equipment on the family ranch. The dog also received antivenin and both Jenkins and his dog have recovered.
.
Father gets 100 years for poisoning kids
A Jonesboro, Georgia man was sentenced to 100 years in prison for poisoning his two children to extort money from Campbell Soup Co.
William Cunningham was sentenced Thursday after a jury found him guilty of five counts of cruelty to children and two counts of aggravated assault, said Kellie Perry, a clerk at the Clayton County Superior Court.
The girl and boy, then 18 months old and 3 years old, were hospitalized after Cunningham fed them soup tainted with prescription drugs and lighter fluid.
On one occasion, authorities said he used the prescription drugs Prozac and Amitriptyline _ both used to treat depression _ to poison the children.
Cunningham was arrested in March 2006. According to prosecutors, the former dump truck driver called Campbell in January 2006 and threatened to sue the company because its soup was contaminated. He pleaded guilty in 2007 to a federal charge of making false claims against the company.
Authorities said there was no evidence the soup was tainted when it was purchased. A family member said the children may suffer lifelong respiratory problems after swallowing the poisoned soup.
The children's mother, Rhonda Cunningham, filed for divorce during the case.
(This version CORRECTS that Cunningham was found guilty of five counts of cruelty to children and two counts of aggravated assault.)
PICTURE
.
Man shoots off his own manhood
A would-be gangster shot himself in the crutch when his gun went off half cocked in his pocket.
Lukas Neuhardt, 27, had forgotten to put the safety catch on when he stuffed the gun into his trouser pocket to impress pals in Saarbruecken, Germany.
He told paramedics that a masked mugger had blasted him in the crutch in a bungled robbery.
But police found a hole in his statement when they saw that the gunshot had miraculously left his trousers intact.
"Instead there was a charred hole in his pocket so either it was the shot of the century or he did it himself," said a police source.
Now - after surgeons stitched his manhood back together - he's facing up to three years in jail for breaching Germany's tough new anti gun laws.
.
Council refuses to fix whole pothole 'because it only owned part'
Potholes along a West Midlands street have only been partially filled in by highways workers - because the council only owns half the land they stretch across.
Baffled traders watched in amazement as Walsall highways workers started filling in problem potholes outside their shops in Bloxwich, only to stop half way through the job.
Council chiefs said the small patch of land next to the pavement belongs to Walsall Housing Group (WHG) and that their maintenance workers are not allowed to carry out work on private land.
But business owners who have waited years for potholes in the street to be filled in have branded the partial repair of the craters, some measuring about two-foot wide, a "ridiculous waste of money".
Keith Clarke, who runs M&C butchers in the road, said: "I've never seen anything like it in my life.
"We've been asking for the potholes to be filled in for some time now.
"When they came to fix them, they drew white lines along the side of the pavement through the middle of some of the holes.
"Then they only filled in half the holes and when we asked, they said their department was not responsible for the other half. It's ridiculous."
"The water is gathering in the other half of the holes, so surely that will ruin the part that has been fixed. What a waste of money."
PICTURE
.
Posted by The Man at 5/23/2009 1 comment: 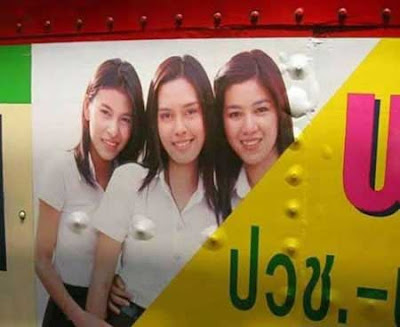 Oven Pride 'So easy, even a man can do it' TV campaign attracted almost 700 complaints to ASA
A TV campaign accused of implying that cleaning is women's work and that men are "stupid and lazy" when it comes to housework.
.
'So easy a man can do it'
.
Posted by The Man at 5/23/2009 No comments: 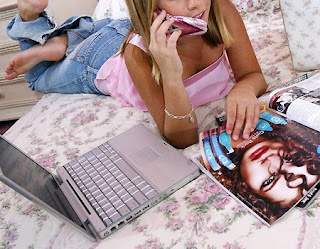 Did you know that when your teenager texts "8," he -- or she -- is suggesting oral sex? Or that "FOL" means "fond of leather"?
You don't even want to know what "FMLTWIA" means.
That's according to a new list entitled "Top 50 Text Acronyms Parents Should Know," which is is making its way around the Internet and has caught the eye of some local TV news reporters.
The problem is ... Many people who see the list wind up howling with laughter, since many of the terms are completely unknown to most people, teenaged or otherwise.
"Some of these are absolutely hilarious," writes "FirstCuts," who posted the link to the online aggregator site Digg. "Honestly, it's probably one of the dumbest things I've ever seen in local network news, and that's saying something."
.
Posted by The Man at 5/23/2009 No comments: