Police shoots at fake concrete alligator
In Independence, Mo., this week police officers over did it, pulling out their service weapon and shooting dead an alligator, or at least as croaked as a concrete croc can get.
Rick Sheridan, the owner of the lawn ornament heard gunfire while working in his garage. When he went to see what was going on he found several police officers with their weapons drawn.
The life-like gator had actually been put in place, the owner said, to scare off trespassers because "No Trespassing" signs were not doing the trick.
The police department later apologized.
.
Chinese teen trades kidney for iPad 2
A Chinese 17-year-old says he used the money he made by selling one of his kidneys to buy an iPad 2 and a laptop computer.
The teen, identified as Little Zheng, arranged the sale over the Internet and did not tell his parents. He admitted what he had done to his mother after she got suspicious about his new equipment and the scar on his body. Little Zheng reportedly received $3,392 for the kidney.
The sale of human organs has been illegal in since 2007, and the government has been encouraging voluntary donations.
.
Posted by The Man at 6/05/2011 No comments:

Hundreds of thousands of sufferers gather annually in in the southern state of Andhra Pradesh to gulp down small live fish and a special herb paste.
. 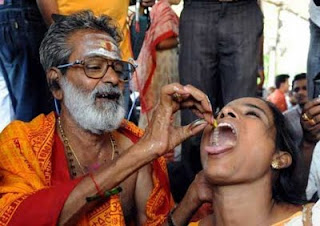 .
The Goud family, which says it received the medicine recipe from a Hindu Saint in 1845, treats people from across for free during a two-day period determined by astrologers and the onset of the monsoon.
The wriggling five-centimeter (two-inch) fish, which the family says clear the throat on their way down, will be dispensed this year on June 8 and 9.
VIDEO
.
Posted by The Man at 6/05/2011 No comments: