Tiny cannon that will blow you away

Don’t be stupid and superglue a hat to your head

A Federal Way, Washington man has filed a lawsuit against the maker of Monster Energy Drinks. He claims he found a dead mouse at the bottom of his can, and he has the lab work to prove it.
It happened March 20, 2010. Sulzhik remembers it like it was yesterday. He went into the Fred Meyer in Des Moines, and bought himself a Monster Energy Drink. When he finished drinking it, he didn't realize another monster would be at the bottom.
"I put it down and I felt it was still heavy. So I backwashed it and all this debris went into my mouth," says the 19 year old. "Then I looked in the can and I saw the tip of the tail and I vomited everywhere."
X-rays and autopsies showed the mouse didn't suffer any trauma, like from a mouse trap, nor was it killed using poison. In other words, there were no signs the mouse was killed and then forced through the opening.
"You hear these wild stories out there. Sure, you're a little skeptical at first," says Reed Yurchak, Sulzhik's attorney. "But everything here has checked out."
Yurchak says Hansen Beverage Company is aware of the findings, but still refuses to believe his client.
.

Authorities in Waterloo, Iowa pulled a man to safety after he jumped off a bridge following a car chase. The man, identified by police as 19-year-old Clifton Jenes of Waterloo, was taken to Allen Hospital for treatment after floating and swimming approximately 7 blocks in the frigid Cedar River. The incident began as a family argument. The man was at a relative's house with his infant child when he threatened to harm himself and the child, police said. A family member got the child away from the man, and he drove off just as officers arrived. A vehicle chase through downtown followed. The fleeing suspect collided with a car at the intersection of West 11th and Commercial Streets, and a police cruiser struck something on Sycamore Street during the pursuit. The fleeing driver eventually pulled over on the Fourth Street Bridge and jumped into the river, police said. He continued downstream, staying afloat through at least one set of rapids and eventually began heading for the north shore. Firefighters threw him a line, and he was detained when he reached land at the 11th Street Bridge. Waterloo police said charges are pending.
Posted by The Man at 3/31/2011 No comments: Crowd surfing as we know it: sweaty man lifted to shoulder-height by insensible gig-goers for a nano-second before tumbling to the floor due to unsustainable weight. Crowd surfing as Giel Beelen knows it: over two hours of 'hang time'. Radio presenter Giel got a big hand from hundreds of fans when he set a new world record for crowd surfing. The Dutch DJ spent two hours, three minutes and 30 seconds aloft being passed around 250 helpers in Hilversum while his show went out on local station 3FM. Speaking after the event Giel said: 'It sounds easy but I'm completely drained. Every couple of minutes you're getting jabbed in the ribs or worse and your head bobs around like it's on a spring.' He managed to raise £20,000 for charity.
Posted by The Man at 3/31/2011 1 comment:

Police were investigating today how a bag of hashish resin blocks, eaten by kids who mistook them for breakfast cereal bars, came to be left on school grounds. The students told teachers that they found the package containing the "leafy-flavored breakfast bars" hidden between a bush and the school fence during recess. One child from the school for 6 - 11-year-olds in Tarentaize in central France, was rushed to the hospital later that evening by his worried mother, along with a piece of the "leafy" bar. Tests confirmed the bar that contained cannabis resin, and the boy was sent home. None of the other children who ate the bars became ill. The mother of the boy who got sick filed a police complaint against the school for the "admission of harmful substances." But inspector of schools said that the "school team responded with vigilance but could not assume that the children had eaten [cannabis]."
Posted by The Man at 3/31/2011 No comments:

The former finance director of a south-side Des Moines business who embezzled nearly $1 million from his employer has filed for bankruptcy, court records show. Randy Gene Stringer, who worked for DES Staffing and related companies owned by Dan Sethi, filed for liquidation of personal debts under the protection of Chapter 7 of the federal bankruptcy code last week. A Chapter 7 proceeding permits the discharge of debts for a filer in exchange for forfeiture of certain property to pay creditors. Court records show that Stringer, who listed himself as unemployed and not making any money, had $203,650 in assets including a $200,000 home in Clive now in foreclosure, and $705,822 in liabilities including $165,078 owed in state taxes and $367,956 in credit card and other unsecured debt. Stringer pleaded guilty in February 2010 to one count of wire fraud as part of a plea agreement after a federal grand jury had indicted him on 33 counts of wire fraud for allegedly sending $81,475 to Colombia and the Dominican Republic between April and September 2009. He had admitted that he embezzled money as finance director for DES Staffing and Des Moines Quick Cash.
Posted by The Man at 3/31/2011 No comments: 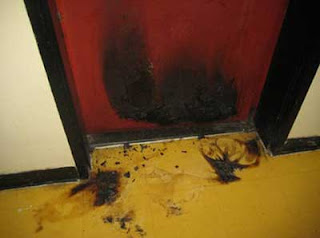 A 24-year-old Stapleton man was so enraged by the mother of his unborn child, police say, that he smeared his own excrement on her apartment door in Clifton and lit it ablaze all while she, her two young children, and two other people were trapped inside. Rasheen Harrison, of Hill Street, now faces arson and other charges in connection with the bizarre incident. Harrison’s rampage began shortly before 5:30 a.m., police allege — he stripped naked inside the elevator of his ex-girlfriend’s apartment building, then defecated, according to authorities. He then went to the woman’s sixth-floor apartment, wiped the excrement on the door, and lit his clothes and the door on fire, authorities allege.
Posted by The Man at 3/31/2011 No comments: 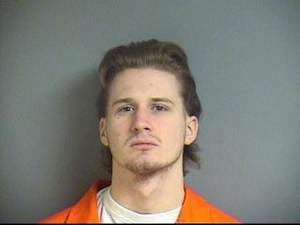 Three-and-a-half months after he led authorities on an 18-hour chase that began at the University of Iowa Hospitals and Clinics, a Bettendorf man is back in Johnson County to face charges. Anthony M. Koehlhoeffer, 20, of Bettendorf was booked in the Johnson County Jail Wednesday on charges of third-degree kidnapping, second-degree robbery, second-degree theft and two counts of leaving the scene of an accident. Koehlhoeffer was awaiting trial on 11 charges – including first-degree robbery, first-degree burglary and assault on a peace officer – when he was transported from Jefferson County to UIHC on Dec. 14 to receive treatment. Somehow, Koehlhoeffer was able to escape from the hospital. According to a University of Iowa Police criminal complaint, Koehlhoeffer – dressed only in a hospital gown and sandals - initially ran to the nearby Reinow Residence Hall. Koehlhoeffer allegedly told an occupant of a car to “get the (explicative) out.” Police said the victim, a female UI student, was punched several times in the face during a struggle before Koehlhoeffer fled in her car. Police said Koehlhoeffer stole an unoccupied car in the Hawkeye convenience store parking lot at 5:34 a.m., hit another car in the parking lot, and then wrecked the car a few blocks away.
Posted by The Man at 3/31/2011 No comments:

“Lucky” Trucker saved from choking when he crashed

A Pennsylvania trucker may have saved his own life with an unintentional and very elaborate Heimlich maneuver. Police say 55-year-old Richard Paylor, of Fairless Hills, Bucks County, was eating an apple as he drove on a busy highway in Reading when he began choking. Authorities say Paylor then lost consciousness and crashed through a concrete median. Investigators believe the apple was dislodged when Paylor smacked his chest against the steering wheel. Police recovered a chunk of apple from the dashboard. Investigators spoke with doctors who backed up their conclusion that the accident dislodged the offending fruit.
Posted by The Man at 3/31/2011 No comments: