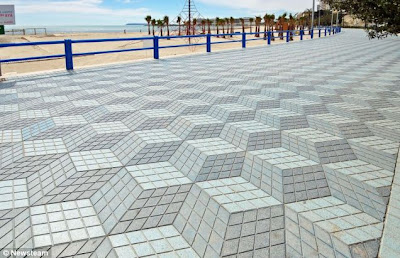 Boozed-up British tourists have to watch where they walk in Alicante after a new patterned pavement has been laid causing nausea and confusion.
The crazy design in the Spanish holiday resort causes the eye to think that the pavement is not flat but stepped.
Set in rows of diamonds at 90 degrees to each other, the opposing slabs create an optical illusion tricking the walker into thinking the walkway is a series of never ending steps.
The design has been causing confusion for British holiday makers as they stumble home after night of drinking.
Some have fallen over and others have suffered nausea.
.
Posted by The Man at 3/25/2011 No comments: 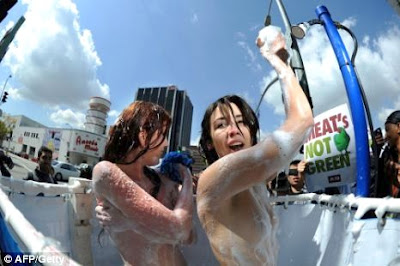 A driver in LA will be having an interesting conversation with his insurance provider, after crashing his car while distracted by nearly naked Peta women taking a very public shower.
.
Click here for more pictures of the Peta protests.
.
Posted by The Man at 3/25/2011 No comments:

A sheep gave birth to a dog on a farm in China, claims its owner Liu Naiying, who has had people flocking to see the woolly 'lamb-puppy'.
'When I went up close to check on the lamb I was shocked because it looked so weird, like a cross between a sheep and a dog. 'I was a bit frightened, as I've been raising sheep for 20 years and had never seen such a creature.'
. 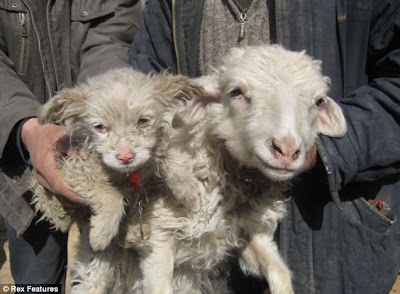 .
Though it has wool like a lamb's, the creature's mouth, nose, eyes, paws and tail are most definitely dog-like. Liu says the creature even plays like a puppy.
Vets, oddly enough, have stepped in and pointed out that it's impossible for a sheep to give birth to a dog, but that hasn't stopped the lamb-dog tourists rocking up to the farm in Fugu County, Shaanxi Province, in their droves.
. 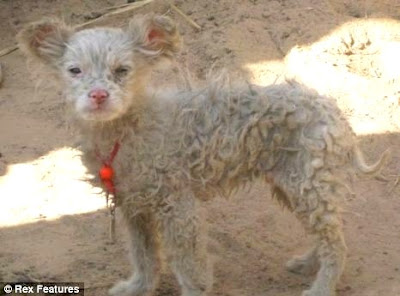 Woman falls asleep at drive-thru
A Tampa Bay-area woman faces several charges after authorities say she passed out while she and three children waited at a Burger King drive-thru.
The Pasco County Sheriff's Office reports that employees called authorities Tuesday night after watching 27-year-old April A. Musson fall asleep in her car. Children -- ages 1, 3 and 5 -- were also in the vehicle.
The sheriff's office says deputies found an oxycodone pill and marijuana on Musson, and she told them she had smoked marijuana earlier that day. Musson was arrested and charged with driving under the influence, child abuse, possession of marijuana and possession of a controlled substance without a prescription.
.
Try fitting this cable bill into the monthly budget
An Ohio man says Time Warner Cable told him he owed the company $16.4 million.
Daniel DeVirgilio, of Beavercreek, says his payment was rejected because it wouldn't cover the total. His bill is usually $80.
DeVirgilio wanted to watch the NCAA basketball tournament's Sweet 16 but didn't expect it to cost a million dollars per team. He jokes he should have added Showtime to his channels because the charge of a few extra dollars doesn't seem big in comparison.
Time Warner says human error is to blame for the payment problem. Officials say a worker typed the wrong amount owed, and a letter to DeVirgilio was automatically generated. They're working to resolve the issue.
.
2 arrested for meth after car runs out of gas
Two Missouri men are facing charges after the car they were in ran out of gas -- and responding officers allegedly found a mobile meth lab.
Maries County deputies responded to a call about a suspicious person on Route 68 near St. James around 3:30 a.m. Thursday. Sheriff Chris Heitman says deputies found a vehicle that had run out of gas.
They then found the two men from the car, along with components of "shake-and-bake" meth, which is typically made by shaking up ingredients in a 2-liter soda bottle. Both men are now jailed.
.
2,500 stolen rubber ducks
Police in the western Chicago suburb of Yorkville are searching for thousands of stolen yellow rubber ducks.
About 2,500 ducks were taken sometime this week. Police say several of the toy ducks have been found on a Yorkville roadway since they were stolen. Police ask anyone who finds a duck to return them.
The Yorkville Citizens Police Academy planned to use them for its annual charity "Duck Pluck."
.
Posted by The Man at 3/25/2011 No comments: 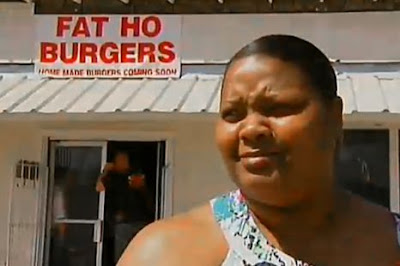 Fat Ho Burgers might seem to some like an unusual name for a restaurant, but its owner has defended her choice after coming under fire from local businesses.
Lakita Evans is the mastermind behind the burger joint and its unconventional name, and said she had no intention of causing offence. 'It's not calling people a ho. It's just like they say, "Oooh that ho is big," or, "That ho is tight!"'
Other local business owners don't see it that way and the 23-year-old entrepreneur has come under criticism from the nearby Gospel Cafe, an eatery and bookshop run by religious volunteers.
However, Ms Evans has defended the Fat Ho Café. The economy is bad somebody got to keep a sense of humor around here,' she said.
The burger restaurant, which serves the Quadruple Bypass Burger and Flatline Fries, hit the headlines after saying anyone weighing over 350 pounds could eat for free.
.
Posted by The Man at 3/25/2011 No comments: