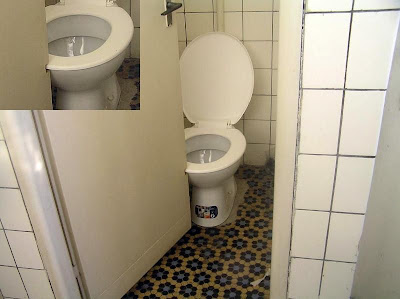 "DAMN" that was close

A Red Bull pilot repeatedly buzzes the control tower
Posted by The Man at 10/13/2008 No comments:

Working out with my Wii Wanker

A guy skates down a wet hill and smacks into a parked car! 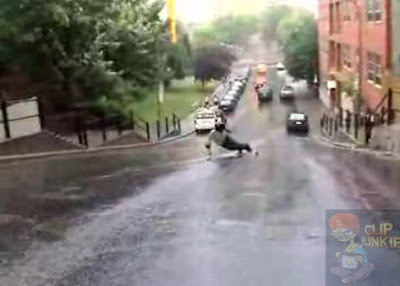 .
What a Idiot at least he was wearing a helmet.

Joey Chestnut Wins Pizza Contest in New York
Chowdown champ Joey Chestnut has done it again — this time proving he's a pizza powerhouse.
He downed 45 slices in 10 minutes Sunday to win the first Famous Famiglia World Pizza Eating Championship in New York's Times Square.
The 24-year-old from San Jose, Calif., says he fasted for more than a day to prepare. He folded and squeezed the slices to make them easier to swallow.
The 24-year-old rocketed to competitive-eating celebrity when he won Coney Island's July Fourth hot-dog eating contest in 2007. He took the title again this summer by gulping down 59 dogs in 10 minutes. He won a contest in Tennessee last month by wolfing down 93 Krystal hamburgers in 8 minutes.
.
Florida Mailman Bitten by Rattlesnake Hiding in Mailbox
Forget rain, sleet or snow.
The bite of a poisonous snake didn't keep mail carrier Efraim Arango from his mail route.
The 66-year-old Arango was bitten as he slipped mail inside a box. He told authorities that he shook his arm and thwacked the small snake against his car door to break its grip.
Arango continued to deliver mail for 30 minutes before seeking help.
Authorities said Arango identified the snake that bit him; it was likely an eastern diamondback rattlesnake.
Arango was treated at a Tampa hospital.
Picture
.
Fooled job seekers stuck with face tattoos
Two Indonesian job seekers have been fooled into having their faces tattooed in order to receive non-existent government jobs.
The pair had their faces permanently inked after village chief Sawiyono told them he had received a text message from a government official offering them work as Jakarta intelligence officers.
The official, who said it was a job requirement to have their faces tattooed with dragons, was later discovered to be a hoaxer — but not before Nanang, 30, and Bambang, 40, had already undergone the painful and disfiguring procedure.
The three men believe the anonymous trickster was a kind of "mystic", as they didn't feel in control of their actions when following his strange instructions.
A horrified Sawiyono realised he had been tricked when double-checking the bizarre request with a legitimate government representative.
"I am fully responsible for the mistake and I will do my best to help the men remove their tattoos,'' Sawiyono was quoted as saying.
Indonesian police say that the tattoo incident was the third hoax of its kind to have been pulled recently.
Picture
.
Florida News
.
Teacher Fired After Asking Her Students For Massages
KISSIMMEE, Fla. -- An Osceola County teacher is out of a job after parents started complaining. They said she asked third grade students to give her massages. One mother told Eyewitness News the touching going in the Kissimmee Charter Academy classroom was highly inappropriate.
In Donna Coulter's third grade class, each student had a job. It could be cleaning the room, organizing books or taking out the trash, but one task really upset parents.
"One of the jobs she was giving was to give her massages," said parent Stacey Vazquez.
.
Baby Dangled By Feet During Carjacking
ORMOND BEACH, Fla. -- A 10-month-old baby was dangled upside down by her feet outside a sport utility vehicle during a Central Florida carjacking.
Alyssa Gould said she and her baby were ambushed in her SUV as they sat at an intersection at 11:20 Friday morning.
Gould told authorities the carjacker opened the driver's side door and pointed a gun at her. The suspect then unbuckled her infant girl and dangled the baby by her feet. The carjacker eventually released the baby to the mother, unharmed, before driving away in the SUV.
The SUV ran out of gas a few miles away. The carjacker fled on foot and remains on the loose, police said.
.
Pet Rat Starts Destructive House Fire
BREVARD COUNTY, Fla. -- David Stanifer was inside a home on Friars Court in Brevard County when a fire started early Monday morning. He and two other people were chasing a rat around the house.
"They told us they were playing with their pet rat and they tied a ribbon to it and they were cutting a ribbon with the lighter," said Lieutenant Teresa Uzel of the Brevard County Fire Rescue.
Firefighters said that the three residents tried to cut the ribbon, but it caught fire. The rat started to run all around the garage, starting small fires.
"This is a first time. It's a believable story because things happen, but this is a first with a rat," Uzel said.
The residents tried putting the fire out, but were unsuccessful. More than a dozen firefighters responded to help fight the blaze.
"This is my parent's house. My dad's not here right now, he's in Africa on a mission trip and my mom works most of the time. We can't get a hold of her," said resident David Stanifer.
Fire investigators said the damage to the home will cost nearly $30,000 to repair.
.
Posted by The Man at 10/13/2008 No comments: