Pregnant man in South Africa
A South African man is in trouble after he faked a sick note which said he needed time off work because he was pregnant.
He now blames PMS for his lack of judgment.

Parenting Book
Britney Spears 16-year-old sister, Jamie Lynn, is pregnant. In a related story, Lynne Spears, their mother, had her book on parenting put on hold.
The publisher decided it would be a safer bet to go with Lindsay Lohan’s book on safe driving.

Until further notice
The Midwest is bracing to be hit by its second big winter storm of the season. In a related story, the Chicago Chapter Against Global Warming will postpone its meeting until further notice.

Reaper
The new TV show “Reaper” is all about people who sell their souls to the devil.
I liked it better when it was called “The Apprentice.”
Posted by The Man at 12/25/2007 No comments: 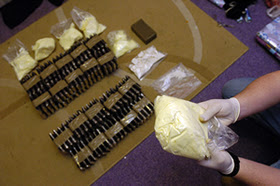 Sniffer Dog Finds Huge Drugs Haul On His Last Raid
A police sniffer dog called Ben discovered a huge stash of drugs - on his last raid before retiring.
The haul of cocaine, speed and cannabis, worth $560,000, was a record for Central Scotland officers.
Click Here To Read More

Dangerous Prank Calls Draw SWAT Teams To Unsuspecting Homes
As SWAT officers surrounded an Alvarado home in rural Johnson County, they steeled themselves for a confrontation with what they believed to be a drug-crazed man armed with an AK-47 who had already killed his wife, taken hostages and wanted to kill police.
But what they found was an innocent 60-year-old trucker. No bloody crime scene, no assault rifle only unanswered questions.
Click Here To Read More

Man arrested in prime-rib assault
A possible assault with a deadly weapon – a 3-pound frozen prime rib – landed a 40-year-old La Jolla man in jail on Friday night. The man's 67-year-old mother called San Diego police at 9 p.m. saying she was afraid of her son, who was at their home on Bird Rock Avenue, Officer Aaron Frodente said. The two had been arguing, and when the mother ordered her son out of the house, he allegedly tossed a cup of water in her face, hurled the frozen hunk of meat at her – narrowly missing her head – and broke the refrigerator door and a bedroom door. Frodente said that when he and his partner, Officer Jason Aguilar, arrived at the house, the son and a visiting friend tried to hide in the garage. The son was arrested on suspicion of assault with a deadly weapon, elder abuse and vandalism. His friend, a 35-year-old parolee, was arrested on an outstanding warrant.
Posted by The Man at 12/25/2007 No comments: