Stairs are for smart people.
.
This guy was very lucky it almost gone bad
Posted by The Man at 10/14/2008 No comments: 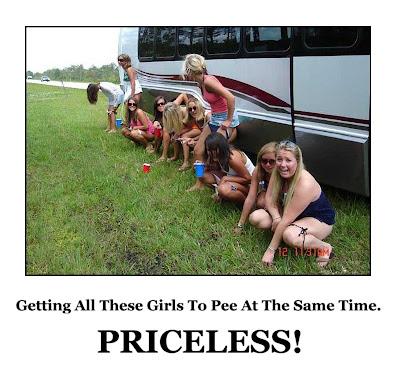 The first one almost looks horrified while the ones at the other end are smiling.
.
Tony.....
Pull over Pee Stops are always a Great Snapshot
Posted by The Man at 10/14/2008 No comments: 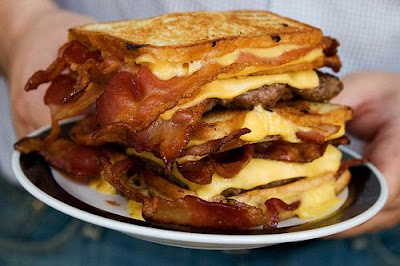 .
Jill said.....
When will it end with BACON?
It started with what else goes with bacon. Now it's has been turned into to the how nasty how many fat and calories a person can put into a pile.
Get realistic that's a death sandwich.
.
Bob said.....
That looks sooo good to eat.
.
So Bob you're the type of a guy that enjoys the moment and pays later.
Posted by The Man at 10/14/2008 No comments:

Things We Do When Bored

See more funny videos and funny pictures at CollegeHumor.
Posted by The Man at 10/14/2008 No comments:

Man regrets having sex with hedgehog

.
.
A desperate guy got his penis ripped to bits when he tried to cure premature ejaculation by having sex with a hedgehog.
The 35-year-old said he had not yet told his girlfriend about his spinney romance.
"I don’t know whether she’s more likely to dump me for being some kind of pervert or for being such an idiot."
Posted by The Man at 10/14/2008 No comments:

Florida News
.
71-year-old woman gets bill for C-section
Oh, baby.
No, a 71-year-old Fort Walton Beach woman did not deliver a child by Cesarean section, even though a hospital billed her for one.
So she filed a complaint of identity theft after receiving a $2,750 bill from a hospital.
As she explained to a deputy, at her age, she "would not be having that type of procedure done."
No, we guess not.
Good thing it wasn't a bill for a hip replacement. That one might have slipped through.
.
Sheriff's employee suspended for showing topless photos
Maybe this sheriff's employee only wanted to make a political statement.
And that's why she wore political campaign stickers as pasties, but it's not going to help Sheila Meschelle.
Meschelle had a photo taken of her shooting a rifle while topless, wearing those pasties, at a Manatee gun range.
Then she showed it to guys she worked with while on duty.
And not just once, but twice.
She first flashed last year, showing her supervising sergeant and other co-workers the topless photo.
Don't bring that to work again, she was told.
But she did and showed it to three deputies.
She was suspended.
.
Woman who ran DUI rehab program now ordered to attend
Time to cut her off. Past time, actually.
Because a judge has now told a Palm City woman who ran a DUI rehab program she's gotta attend.
Margot Cioffi is the former executive director of an agency for people convicted of driving under the influence of alcohol or drugs.
Then, whoops. Cops arrested her following a car crash.
She faced multiple charges including driving under the influence and disorderly intoxication.
Time for her to take a refresher course.
.
Man hits parked cop car -- with a deputy inside
One for the road?
Never a good idea.
Especially for a Naples guy now facing DUI charges after a three-car crash.
In one of the cars he hit: a Collier County Sheriff's deputy who was busily writing up another driver.
One moment, the cop is doing paper work. The next, he's on his way to the hospital.
It wasn't like the DUI guy couldn't see him, the patrol car's emergency lights were flashing.
.
Father Accused Of Abandoning Newborn Baby In Woods
ORANGE COUNTY, Fla. -- Deputies found a newborn baby Monday afternoon abandoned by a father in woods near the 417.
Eyewitnesses called police because William Allen seemed "out of it" while holding the child at a Winn-Dixie.
Deputies followed Allen into the woods, but he didn't have the child. They searched the area and found the baby, who is okay.
.
Man Wearing Bra, Slip Asks Woman To Rub His Breasts
This guy needs a date. Or something.
First he goes to a woman's apartment in Seminole County where she was selling undies advertised on Craigslist,
He tries on a bra and slip and asks the woman to rub his fake breast.
Then he grabs her breast and rubs his groin on her, saying "I'm getting turned on," and "This is making me hot."
Then he asks her if he can masturbate.
As if that wasn't enough -- the dude didn't even buy any undies!
.
Drinking and driving result in an "accident" of the bathroom variety
When ya gotta go, you gotta go.
So there was no stopping an Okaloosa Island man, whom cops clocked at 65 in a 35 zone.
The driver got out of the car and immediately peed on himself while asking the deputy if he was in trouble.
When the deputy asked the driver if he'd been drinking he confessed.
Might as well, considering the driver handed the cop a half-full bottle of rum.
.
Anonymous said...
I say find these 'topless' photos of the sheriff's office employee, give away to the highest bidder so she can pay her attorney fees!!!
Posted by The Man at 10/14/2008 No comments: