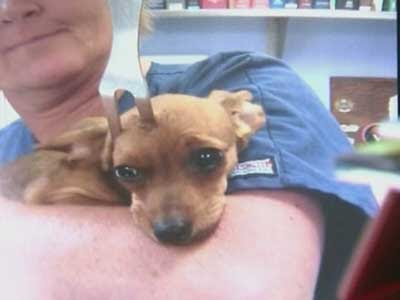 Bride's bouquet brings down plane
The traditional throwing of a bride's bouquet for luck ended in disaster at an Italian wedding when the flowers caused a plane to crash.
The bride and groom had hired a micro light plane to fly past and throw the bouquet to a line of women guests. However, the flowers were sucked into the plane's engine causing it to catch fire and explode.
.
Giant golf course to open in Australian outback
Covering roughly the same distance as Land's End to John O'Groats, it is a golf course that requires a driver at every single hole.
Australia's Nullarbor Links is the largest course in the world, crossing two time zones and encompassing some of the flattest, driest terrain on the planet.
It spans two states, stretching 848 miles from Ceduna in the south to the old gold mining town of Kalgoorlie in Western Australia.
The holes are so far apart that players will have to be bused from one to the next and are likely to encounters some native Australian wildlife, including kangaroos, bush turkeys, emus, snakes and, of course, flies, on their way.
.
German man blows off both hands in kitchen accident
An German chef Heston Blumenthal accidentally blew off both of his hands while attempting to create a dish with liquid nitrogen, according to a newspaper report.
The 24-year-old chef was experimenting with a recipe involving liquid nitrogen, which is used by chefs including Heston Blumenthal to freeze food, when there was suddenly an "enormous explosion", according to the police report he had been trying to fill a gas lighter, but his girlfriend said the man, who was a follower of the "molecular gastronomy" culinary school, had been trying to empty a canister of liquid nitrogen.
.
Man Uses Beer to Lure Drunk Intruder Out of His House
A homeowner in Bar Harbor, Maine used a beer to entice an intoxicated intruder to leave. The intruder apparently didn't realize that it was a nonalcoholic beer, police said.
The homeowner awoke early Monday to find 22-year-old Scott Cote in his bedroom and used the beer to convince him to carry on, Bar Harbor police said. Officers said they found Cote breaking into cars a short time later and arrested him after he fled into some woods.
Police arrested Cote on charges of burglary, criminal mischief, operating a motor vehicle after revocation and violating the conditions of release.
.
Swearing can reduce the feeling of pain
It might be socially unacceptable, but an outburst of swearing after a DIY mishap or stubbing a toe can actually do some good. Scientists have discovered that uttering swear words can help to lessen the feeling of physical pain. The study by researchers at Keele University found that volunteers were able to withstand pain for longer when they swore compared to when they used words which were not offensive.
.
Driver found showering at wheel
A Chinese trucker has been fined for having a shower while driving his lorry on a motorway.
A police patrol car spotted water leaking from the driver's cab as it sped along the Jinyi expressway.
"We worried the driver may not have known about a mechanical problem so we signalled him to pull over at a service station," said a police spokesman.
The police officers were shocked to see the driver was wet through and had been enjoying a shower via a sprinkler kettle system rigged up above his head.
His wife, who was sitting in the passenger's seat, had been holding up a sheet of plastic to protect the instruments from the water.
She told police officers there were rushing to deliver goods in another city and she had rigged up the shower to keep her husband cool after the air-conditioning system broke down.
Police fined the lorry driver and warned him he would be in serious trouble if he tried to have a shower at the wheel again.
.
Posted by The Man at 7/15/2009 No comments: 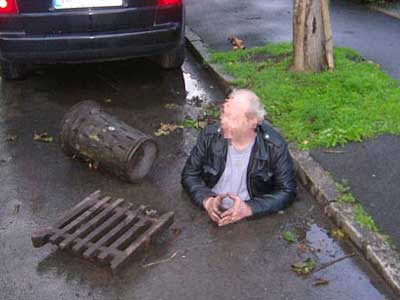 A German man's love of beer proved his undoing after he fell into an open drain - and couldn't get out because of his beer belly.
Gerhard Wilder, 46, from Bochum in western Germany, was wedged so tightly in the drain that he had to be freed by firefighters.
He has now pledged to stay off beer and go on a diet after embarrassing pictures of the incident were shown all over German media.
A motorist raised the alarm after he went to move a car parked next to the drain and spotted the trapped man.
He said: "I heard a voice saying help and at first I didn't see him.
"Then I tried to pull him out but he was wedged tight. He didn't see that jokers had removed the drain cover as he staggered home."
Firemen spent an hour removing part of the drain before they could pull the man free.
A fire brigade spokesman added: "He did not know how the drain cover had got removed - and denied doing it himself.
"After he was freed he walked home on his own - I think he was very embarrassed by it all and promised he would never drink again. He also said he planned to lose weight."
.
Posted by The Man at 7/15/2009 1 comment: 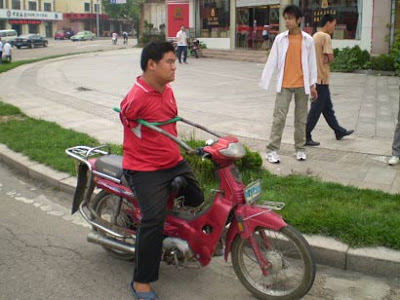 A motorcyclist received a caution from police officers in China - for riding with no arms.
Officers in Jimo, Shandong province stopped the motorcycle for being overloaded - but were shocked when they saw the driver, reports the Qilu Evening Post.
Liu, 27, lost both arms at the age of seven after an electric shock. When he was 10, his parents sent him to a local circus to learn skills, and from then on, he trained himself to ride a motorcycle without arms.
Police officer Xhang Jie said: "I spotted from a distance that the motorbike had three adults on but we were all stunned by what we saw when we got closer."
Liu admitted that he had been riding his adapted motorcycle for 10 years without arms - and he didn't even have a license.
He said the circus where he worked had closed down three years ago and he and two other disabled circus workers had been performing on the streets ever since.
Police decided against fining him because he didn't have any money but issued him a serious warning. Liu promised them he would not ride motorbikes again.
.
Posted by The Man at 7/15/2009 No comments:

Just Another Day For Some

Two dudes with too much time on their hands

Why Do You Judge Me The Way I Look 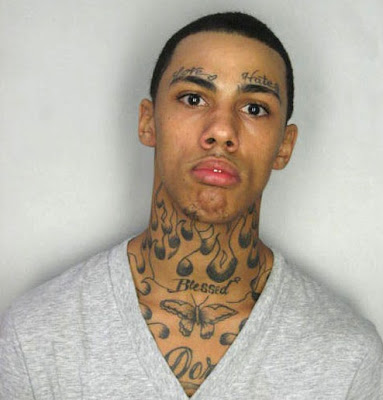 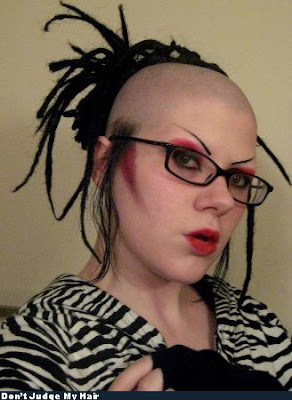 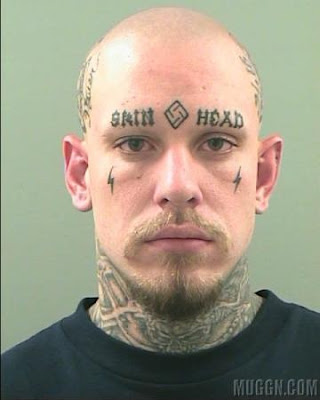 Authorities in Livingston Parish, Louisiana say a deputy acted appropriately in trying to arrest a man at a traffic stop.
.
Posted by The Man at 7/15/2009 3 comments:

"I've heard of brainwashing, but this is ridiculous!"
Enlarge 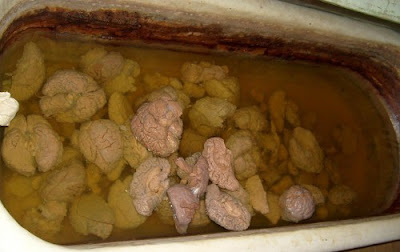 Brain expert says:
Just to answer a few questions that I've seen a few times:
1) Those are definitely human brains.
2) Those are definitely preserved human brains, probably with formalin. Fresh brains have the consistency of Jell-O they're wobbly and soft and more pink than those brains. As you can see in the picture, those brains are pretty firm and more grayish.
3) You can see some horizontal cuts in the lateral surface of some of the brains -- that's from the bone saw that opens up the skull.
4) The half-brains are intentional -- the two hemispheres of the brain are connected by a thick band of neurons (the corpus callosum) that someone cut through. Neuroanatomy classes like to have half-brains so that you can see all the midline structures of the brain.
My guess is that these are either brains that are going to neuroanatomy classes, or brains that have been removed from cadavers bound for gross anatomy classes.
.
Posted by The Man at 7/15/2009 No comments: