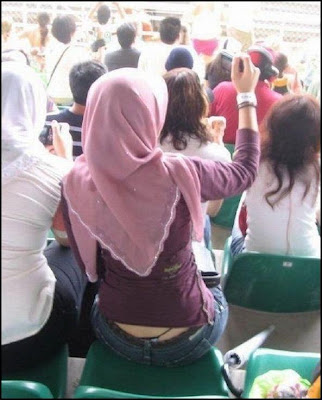 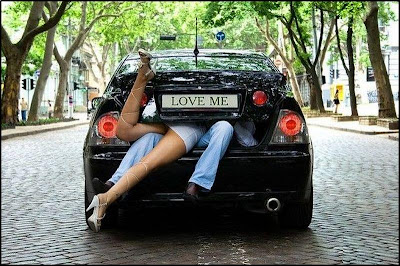 This Fiat is a piece of SHIT 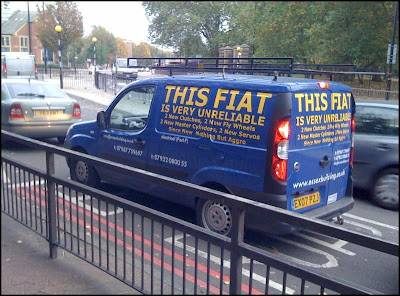 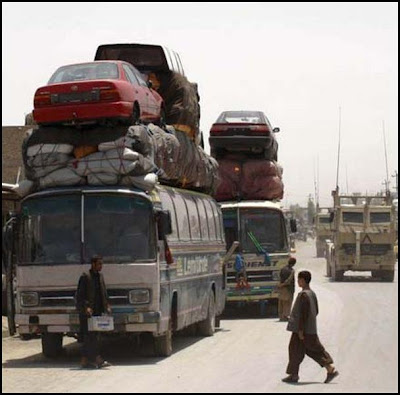 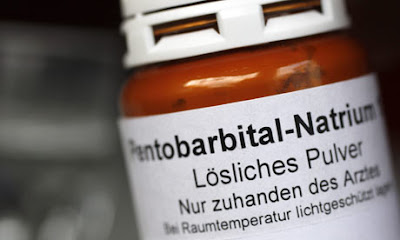 Record numbers of Britons who are suffering from terminal illnesses are queueing up for assisted suicide at the controversial Swiss clinic Dignitas, the Observer can reveal.
Almost 800 have taken the first step to taking their lives by becoming members of Dignitas, and 34 men and women, who feel their suffering has become unbearable, are ready to travel to Zurich and take a lethal drug overdose.
The tenfold increase in the number of Britons who have joined Dignitas since 2002 will raise questions about the law that bans assisted suicide in Britain.
On Tuesday, 46-year-old Debbie Purdy, who suffers from progressive multiple sclerosis, will go to the House of Lords, the UK's highest court, asking it to determine whether her husband Omar Puente will be prosecuted if he helps her to travel abroad to die.
.
Posted by The Man at 6/02/2009 2 comments: 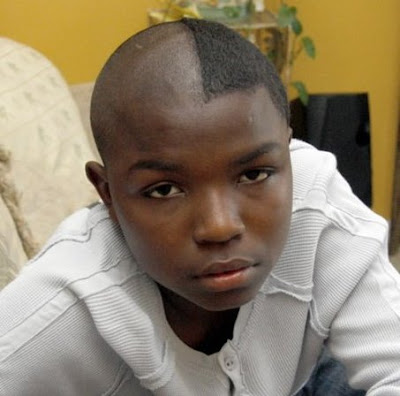 Half-dressed is clearly against school policy, but what about half a haircut?
Dennis Reynolds, an eighth-grader at Staten Island's Barnes Intermediate School in Great Kills, claims he was sent home this morning because he arrived with half his head shaved.
And while the city Department of Education's Student Bill of Rights and Discipline Code has plenty to say about inappropriate attire, there's not a single word about hair do's and dont's.
"The assistant principal told me my hair cut wasn't good enough," Dennis, 14, said from his Mariners Harbors home when he should have been in school getting in one last review session before tomorrow's state social studies exam.
An Education Department spokeswoman called it "a misunderstanding." The phone call home was a formality to make sure Dennis' mom knew what he did to his hair.
..
Posted by The Man at 6/02/2009 1 comment:

A 72-year-old woman is pulled over for speeding, then tasered and sent to jail. Kathryn Winkfein says she drives to Austin about twice a month to do her shopping. But on a Monday afternoon, a Travis County Constable deputy pulled her over, on her way back to Granite Schoals.
"Due to being a construction zone, and workers being present," Pct. 3 Constable Richard McCain said, "it was 45, she was doing 60."
Winkfein admits she was speeding in the dangerous strip of Highway 71 and Bee Creek.
"He explained to her," Constable McCain said, "sign the ticket stub, it's not an admission of guilt. It's a promise to appear in court. She didn't want to. She said take me to jail."
That's when the officer says Winkfein exited her vehicle and didn't cooperate.
"She refused to get off the side of the road, he said to her, Ma'am, you're under arrest. She used profanity," the Constable said. He adds she got violent, and the officer used a taser on her.
Winkfein showed her taser scars.
"Here and here. Two places, side by side. It's unreal. It's like an electric shock," she said.
A shock Winkfein believes she didn't deserve.
"I wasn't argumentative, I was not combative. This is a lie. All of this is a lie, pulled away from him I did not," she said, reading the arrest affidavit.
The great-grandmother was taken to the Travis County Jail, where she was booked for resisting arrest and detention. She was released shortly after. Now, Winkfein has hired attorneys to protect her rights.
When asked if it was appropriate for the arresting officer to have used a taser, Constable McCain answered yes.
.
Follow Keri Bellacosa on Twitter.
.

Microsoft's New Search Engine Puts Porn in Motion
You can get a bang out of Bing — and that's not a good thing, Internet safety experts warned on Monday.
Bing, Microsoft's new search engine (http://www.bing.com/), went live in the U.S. this weekend, aiming to challenge and possibly unseat industry titan Google.
But bloggers and Internet safety experts quickly discovered that one of Bing's "features" is that it takes only a few clicks for anyone — of any age — to view explicit pornographic videos without even leaving the search engine.
In its bid to beat Google, Microsoft has unveiled a slate of convenient features for Bing, including an "autoplay" tool that lets users preview videos simply by hovering a mouse over them.
That asset may become a liability, because users can get a taste of porn videos on Bing instead of having to go to a smutty Web site — an innovation other search engines have yet to offer.
.
Newborn Abandoned in Motel Room Littered With Beer Cans
A newborn is being cared for at a West Springfield. Mass hospital after being found abandoned — umbilical cord still attached — in a West Springfield motel room littered with empty beer cans.
Police said the baby was discovered early Saturday by a couple returning to the room next door at the Welcome Inn.
Kimberly Dougherty said that she heard a weak cry coming from the next room. The door was ajar and when she entered, she found the baby girl lying on her back in the middle of a double bed.
Dougherty said she and her husband wrapped the baby in towels until paramedics arrived and took the infant to Baystate Medical Center.
Dougherty guessed that the baby was only an hour or two old.
Investigators are trying to track down the mother.
.
Teen parents charged in toddler’s meth-related death
A toddler died at Wayne County Hospital late Saturday after drinking caustic chemicals related to the production of methamphetamine.
His 14-year-old mother and 19-year-old father have been charged with murder in the death of the 20-month-old. Both are also charged with manufacturing methamphetamine.
The mother’s name was not released by the Kentucky State Police because of her age. Police identified the the father as Bryan Daniels of Monticello.
Four others from Monticello have been charged in relation with the incident. The other adults charged with manufacturing methamphetamine: Danny Anderson II, 26; James Hunt, 24; Alisha Dicken, 21; and Wesley Bell, 24.
The child was pronounced dead in the emergency room at Wayne County Hospital near midnight Saturday. The group apparently was operating out of two homes in the Boston Hill Road area, police say.
.
Posted by The Man at 6/02/2009 No comments:

Man pulls Cop over for Speeding

A YouTube video of an Accomack County Sheriff's deputy speeding has become the talk of the Eastern Shore. The driver who videotaped the deputy later confronted him.
"I'm coming for you," the driver says on tape. "You can't run baby."
What could be considered a dangerous way to prove a point has become an internet favorite.
"I was in shock that someone was stupid enough to actually do that," said Accomack resident Elizabeth Walraven.
The video, shot earlier this month, has had more than 20,000 hits. The driver films himself chasing down the deputy he believed was speeding.
"I just got you on video blowing by me at 90 miles per hour," the driver said to the deputy. At one point the driver's speedometer hit 90 heading down Highway 13. "He was holding his cell being a commentator," said Accomack County resident BJ Bundick. "That is ridiculous. It was irresponsible on his side."
Accomack County Sheriff Larry Giddens says Deputy Jason Campbell was simply caught on tape making a mistake. He tells WAVY.com the young officer wasn't responding to a call and shouldn't have been speeding. The sheriff says Campbell has been disciplined. He wouldn't tell us Deputy Campbell's punishment.
"You're scared aren't you," the driver yelled at the deputy during the chase. The identity of the 20-year-old cameraman remains a mystery. The 8-minute video shows him honking and getting the deputy to pull over. He then confronts the officer and the deputy lets the driver go.
.
.
Posted by The Man at 6/02/2009 No comments: