While holding illegal drugs, drive carefully
Do not forget to buckle your seat belt
Do not travel over the posted speed limit.
Do not drive a car that has been stolen.
Do not drive with a suspended license.
Speeding and not wearing a seat belt resulted in a man facing criminal drug charges, according to a Sheriff's Office arrest report.
Deputies stopped Timothy Simmons, 34, who was traveling seven miles over the speed limit and not wearing a seat belt while driving a 2006 white sedan.
During the course of the traffic stop; deputies found marijuana and prescription pills. Simmons didn't have a prescription for most of the pills.
Simmons is charged with grand theft auto, possession of a controlled substance, marijuana possession under 20 grams and driving with a suspended license with knowledge.
After checking the car's registration, deputies learned it was reported stolen from .
.

Man knocks out wall, pulls plane from basement
Lots of houses have a two-car garage. Dan Reeves' had a one-airplane basement.
The central man had to remove a basement wall to get it out.
Reeves spent the past nine years building a two-seat airplane in the basement of his home. The plane arrived in pieces via mail but eventually it became way too big to get up the steps.
So Reeves dug a trench down to the foundation and took out a wall. Reeves pulled the plane out using a truck, a chain and some neighbors.
Onlookers were drawn to the spectacle by the "Airplane Removal Wednesday" put up on Reeves' porch. Reeves says he spent $40,000 on the plane and about $5,000 on the excavation.
.
Posted by The Man at 5/29/2011 1 comment:

Sheriff Deputies was in , taking aim at unregulated gambling -- mouse racing. Officers raided the Bucktail Lodge in search of code violations and shut down the popular races.
. 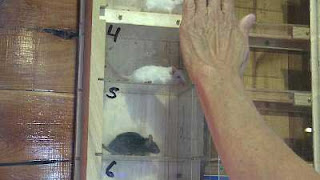 .
"We don't consider it gambling at all, its just people having fun. The money goes back to them. If you win, you win; if you lose, you lose," said Scott Beach, owner of the Bucktail Lodge.
When the mice aren't competing, they are adored as pets in the family's apartment above the bar. For now, the races are on hold, but the mice racers said they will be in court to fight for the right to their rodent-race night. They said the incident makes it clear that the local police have little to do.
"There's no meth heads or makers around here, you just gotta mess with the mouse racers," said Beach.
VIDEO
.
Posted by The Man at 5/29/2011 No comments:

A man's rare coin collection worth about $1 million was scattered along Interstate 95 when the collector's car was involved in a rollover crash near mile marker 250.
A couple was heading north to a coin show in when the back passenger-side tire blew out in . The SUV rolled, flipping at least five times, police said.
. 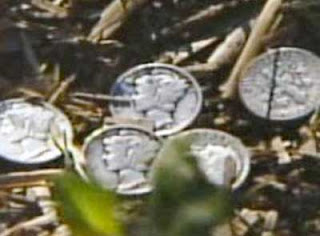 .
The rare collection went flying out of the car, spilling across the median.
The collector's wife's arm was fractured in the crash. The coin dealer's injuries were much worse.
The man initially refused to leave the scene. "He was in pain, but he was more worried about the money," Florida Highway Patrol Trooper Darryl Haywood Jr. said.
Rescue crews convinced the dealer, who they said has heart problems, that he needed to go to the hospital. "The pain started setting in. I think his adrenaline kicked in when it first happened," Haywood said.
The man tapped into his network of collectors in the area to help recover the coins. "Eight people came out with metal detectors."
Troopers stayed to help, too, and a tow truck driver found $46,000 in bills in the trees.
Haywood said those trying to cash in by searching for more coins can get a ticket for stopping along the interstate and that troopers are watching the area.
VIDEO
.
Posted by The Man at 5/29/2011 No comments: