Factories making Apple iPhones and iPads forced staff to sign pledges not to commit suicide before they were taken on. At least 14 workers at Apples Chinese supplier Foxconn have killed themselves in 16 months.
. 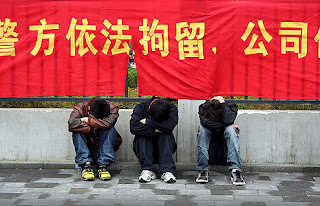 .
One executive accused victims of doing it to win compensation payouts for grieving relatives. And in the aftermath of the tragedies, people seeking jobs at the giant factories were ordered to make written promises not to follow suit. They even had to vow that if they did, their families would not claim more than the legal minimum in damages.
. 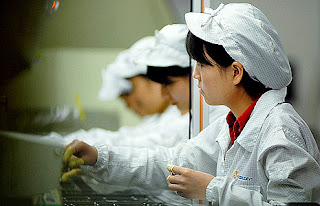 .
The wave of suicides came as worldwide demand for iPhones and iPads rocketed, forcing staff to put in up to 98 hours of overtime a month almost three times the limit in Chinese law. Foxconn insist they had to break the law to hit targets, even though excessive overtime is banned by international law and Apples own code of conduct.
The computer giant founded by Steve Jobs netted s3.5billion profit in the first quarter of this year alone. But the basic pay for Chinese workers is as little as s5 a day.
.
Posted by The Man at 5/02/2011 No comments:

Somebody is socking it to the toilets at the , and campus maintenance officials are not amused.
Hundreds of socks have been flushed at the UAF Fine Arts Complex since December, creating havoc on the building’s sewer system. Maintenance Superintendent Bill Cox figures the stray socks have caused at least $15,000 in equipment damage and labor costs.
Cox said unusual things end up in sewer drains all the time. But the wave of socks has come at an alarming rate — the maintenance staff has a 30-gallon bucket that’s nearly full of socks retrieved from the system. The socks are mainly children’s sizes, Cox also said the strange habit must be costing a fortune.
. 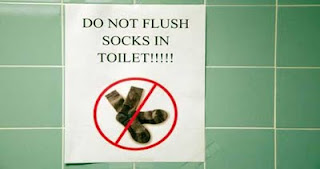 .
Maintenance workers posted signs in bathrooms last week asking people not to flush socks. It didn’t slow things down — about 40 more socks showed up in the next few days.
Cox said maintenance workers will continue to routinely check the system. He isn’t sure what else can be done to stop the problem campus officials admit they don’t know who’s behind it. “You can’t put cameras in the restrooms,” Cox said. "We’re just kind of at a loss."
.
Posted by The Man at 5/02/2011 No comments: