Did you know this about “ICE CREAM?”

In the USA more ice cream is consumed per head than any other country in the world – such is the love of ice cream amongst Americans. This is reflected in other ways too, not least by the fact that the USA has its own ‘National Ice Cream Month’. Since 1984, when President Reagan proclaimed that National Ice Cream Month be celebrated annually, every July has been a focus for greater attention to ice cream in the United States with the 3rd Sunday of that month each year being National Ice Cream Day.
.
Definitely One Of My Favorite Holidays
Posted by The Man at 7/21/2008 No comments:

The old glue his flip flips to the floor prank

Why are there still people who
refuse to wear a helmet when riding a motorcycle? 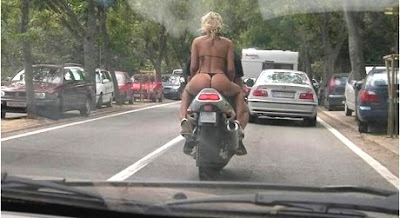 Maybe she’s waiting for the The Matching "BOOTY" Protector.
.
More About This Here
Posted by The Man at 7/21/2008 No comments:

Sexual Harassment And You - NSFW

Look Into My Eyes!

My Eyes Are Not Down Here!

Stinky Mess Dropped On Road
Motorists on Kahekili Highway in Kaneohe experienced an unusual traffic delay yesterday as putrid pieces of whale carcass fell off a truck.
The carrion, being transported by Hawaii Pacific University for research, littered the intersection at Haiku Road for more than two hours, creating a noxious nuisance to neighbors.
PICTURES
.
Dentists' drill and toothbrush under threat from new inventions
The dentists' drill could be consigned to the past while the future of the toothbrush is under threat, with the arrival of two radical new inventions that could be available within five years.
Scientists at Leeds Dental Institute have created a solution that mimics the way the body forms new teeth, which can be used to repair holes naturally without the need for drilling and filling.
The same researchers have also formulated a mouthwash that kills the bacteria that cause plaque when a light is shone into the mouth.
They believe the mouthwash could be available in as little as three years or less while the alternative to drilling could be ready for use within five years.
.
Home Invasion Legalized
More than a 1,000 Snooper Laws now exist that allow the authorities into British homes, it has emerged.
The 1,043 laws – nearly half of which have been introduced under Labour – include the right to inspect pot plants for pests, to measure the height of hedges, to search bedrooms for asylum seekers and to look at fridges for their energy rating.
Additionally, penpushers also have the right to search for dancing bears, if hypnotism is being practiced illegally and to know if homeowners are keeping rabbits.
The information will heighten fears among campaigners that Britain is becoming a "Big Brother" society. The Conservatives claimed that the list of powers of entry was "quietly slipped out" without a press release on the Home Office website.
.
$20,000 Earrings Found in New York Trash Dump
Diamonds in the rough? Try a $20,000 pair of the glinting gems in a reeking truckload of trash.
A Staten Island jeweler got her 3-carat diamond earrings back after she, her husband and city sanitation employees sorted through a heap of garbage.
"It's a miracle — $20,000 earrings looking at you from the garbage," said their owner, Haya Sharon.
The studs, an anniversary gift from her husband, were in a small jar of cleaning solution. A worker at the couple's jewelry store accidentally threw it away Tuesday.
Posted by The Man at 7/21/2008 No comments: