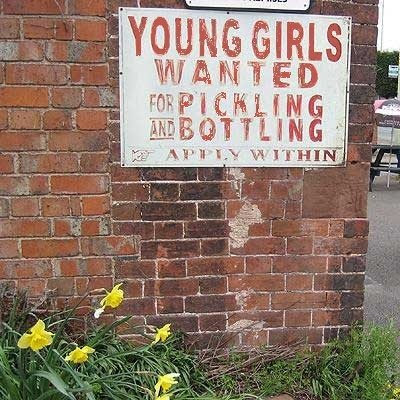 Suspect with TV on bike 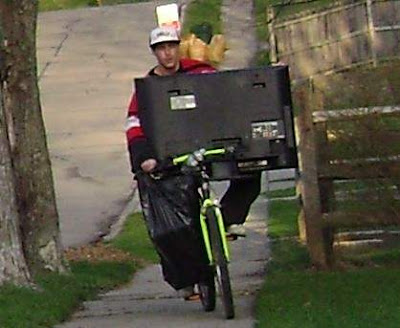 I originally posted just a picture that I found now I got the rest of the story.
Not known at the time this guy just rip off a 42-inch TV.
But why was the idiot riding a bike down the sidewalk he must have thought it would be less noticeable then the noise of a car?
.
Cincinnati police are crediting a member of a Price Hill block watch group with helping to arrest an alleged burglar by snapping the man's photo Monday as he pedaled his bike down a street carrying a stolen 42-inch flat-screen TV.
Joshua Nuckles, 23, of Price Hill, was arrested Thursday and charged with three counts of burglary and two counts of breaking and entering, court records show.
He broke into several properties on Rosemont Avenue, Lockman Avenue and Considine avenues to try to steal items, records state.
Nuckles is held at the Hamilton County jail on $50,000 bond.
.
Posted by The Man at 4/13/2009 No comments: 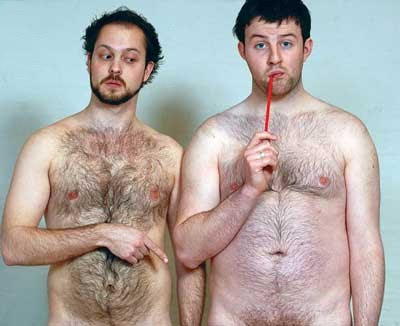 And he'll start by “Juge” your spelling 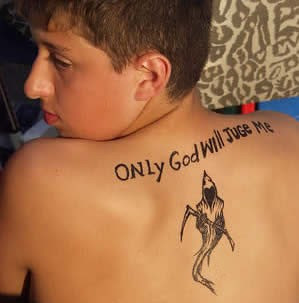 Bartender give me another drink 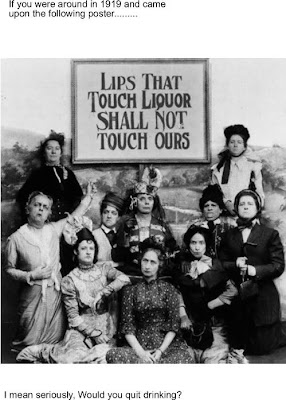 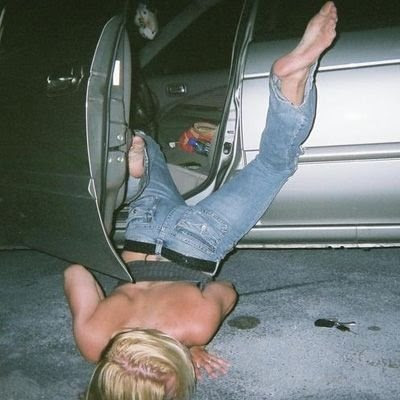 Man calls 911 because kids won't listen
A man called 911 because his kids wouldn't listen, he told the Okaloosa County Sheriff's Office deputy who responded. He seemed intoxicated, the deputy noted in the report.
An hour later, the man's wife called 911 and said her husband was angry and calling the children "no good pieces of (expletive) kids." He also called his son a derogatory name and tried to punch him, the wife said.
An emergency injunction was obtained to protect the family. The man agreed to go to Bridgeway Detox Center, but on the way he began to spit and blow his nose on the seat in the back of the deputy's patrol car. He also screamed and called his wife a profane name until he passed out.
The deputy called and asked that EMS meet him at Bridgeway due to the amount of alcohol the man had ingested.
The case was referred to the Department of Children and Families.
.
Cable glitch switches religious program to racy "Girls Gone Wild" ad
A Philadelphia cable television network's early morning broadcast of a Good Friday service at the Vatican abruptly changed to something wildly different — a racy 30-second "Girls Gone Wild" ad.
Comcast spokesman Jeff Alexander says the 2 a.m. Friday programming glitch was due to a required test of the Emergency Alert System. He says such tests are usually done in the overnight hours.
The test automatically tunes viewers to a preselected channel that would provide information in the event of an emergency. But during tests, the channel airs regular programming, which in this case included a paid advertisement for the racy videos.
.
Hello, this is the afternoon nudes
Channel 4 is leading a revival of figurative art by broadcasting life drawing classes featuring nude models on daytime television.
The new series will provide a counterbalance to the brash Britart movement popularized by Damien Hirst and Tracey Emin, but is likely to cause controversy among traditionalists by showing full-frontal male and female nudity well before the 9pm watershed.
Viewers will be able to sketch models from home, while an expert will appear in the corner of the screen during each programed to give technical advice. The five-part series, called Life Class: Today’s Nude, will be broadcast on consecutive days in July, before 6pm.
"Because it’s educational and non-sexualized nudity, Channel 4 didn’t have any concerns with it at all," said Alan Kane,
John Beyer, director of Mediawatch-UK, a viewing standards pressure group, claimed Channel 4 had "an obsession with sex and nudity".
However, John Whittingdale, the Tory chairman of the Commons culture select committee, said that, in principle, he would not object to nude life drawing classes before 9pm if they were in an "educational context" and avoided "gratuitous titillation."
.
Posted by The Man at 4/13/2009 No comments: