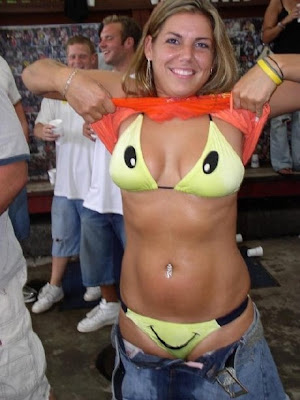 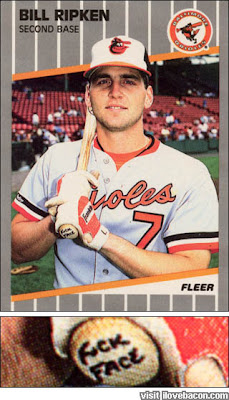 The players used to put pieces of tape with their name on the ends of bats.
Apparently somebody played a trick on Billy and he used the bat for his card photo.
Later runs of this card have the words covered up.
You can still find them sometimes on EBay.
Posted by The Man at 4/01/2008 No comments:

India army are set to deploy a "curry bomb" to win the war on terror. 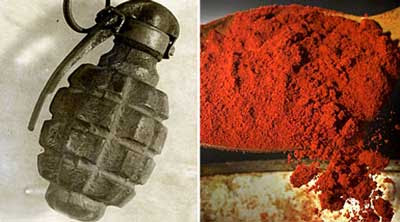 India's weapons development experts have developed an eye-watering spice bomb, packed with a potent mix of red chili and pepper which will be used to smoke out militants during counter-insurgency operations. As Britain's legion of Friday night Vindaloo casualties will testify, too much chili can be debilitating.
But scientists from India's Defense Research and Development Organization have discovered that the spices which make your curry so hot can also bring an enemy to his knees in seconds. They have created an 81-mm grenade packed with red hot chili, pepper and phosphorus to use in Kashmir where Islamic separatists linked with al Qaeda are fighting a long-running insurgency war.
Their enemy is often unseen, and can easily disappear in civilian crowds. India's curry bomb however will help its soldiers to immobilize enemy fighters, and allow them to be captured, without long-term injury.
Posted by The Man at 4/01/2008 No comments: 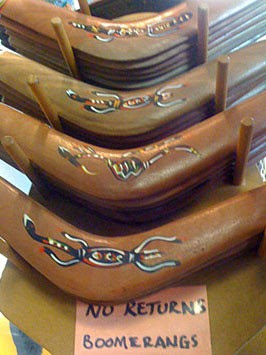 This Russian guy has ordered his brand new SONY laptop via DHL.
He waited a few days and when he got the package he was so excited.
He passionately tore the box and found there… 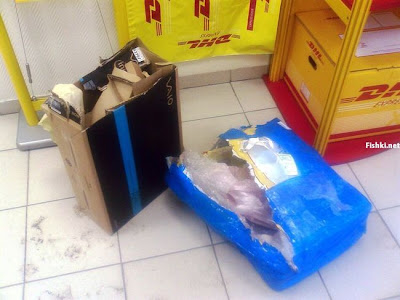 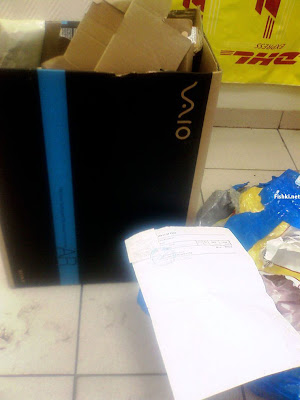 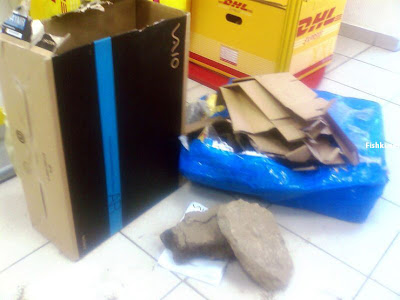 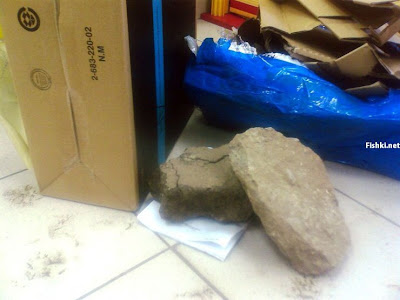 Yes, just two boulders instead of the new SONY laptop.
Posted by The Man at 4/01/2008 No comments: 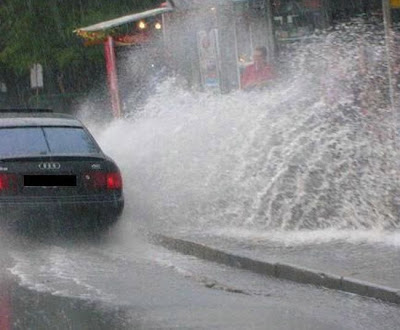 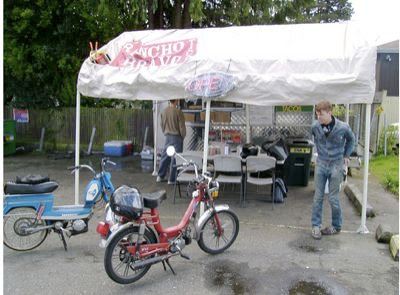 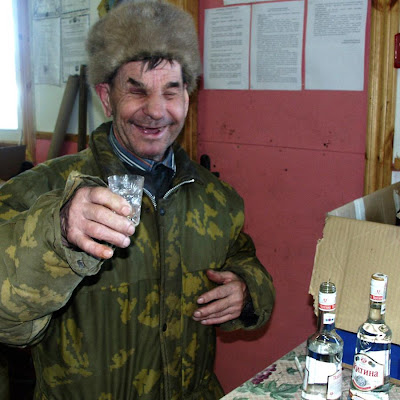 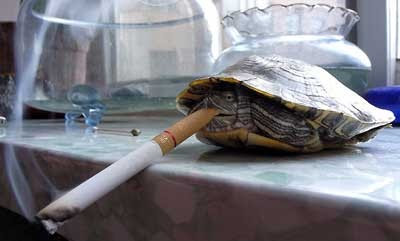 The pond-dwelling pet got hooked after finishing off cigarette butts its owner tossed into his garden – and now gets upset if it doesn’t get half a pack a day. Chinese owner Li Yun said: “Whenever I smoke it lifts its head out of the water and stares.” “If I don’t let it smoke, it swims around crazily, scratching the sides of its little pond. It won’t stop until I give it a cigarette and it bites the butt – you can see the tip glowing.” “Within four minutes the cigarette’s gone.” A local animal protection society says it wants to have words with Li at Kouqian, China. A spokesman said: “If the turtle smokes voluntarily “there is little we can do – but we want him to stop making it public.”

Police Questions Girl After Fetus Found On Jet
Suspect Juvenile Gave Birth While Aboard NY-To-Houston Flight. The 14-year-old girl delivered a stillborn fetus in the bathroom of an airplane on a flight from New York and disposed of the body in a waste can, police said Monday.
.
Woman sues over hospital boobs
A German woman is suing doctors after she checked in to have wrinkles removed - and woke up with a new pair of breasts. Ingrid Bruelling, 33, had the operation in the German city of Kassel. She wanted to give herself firmer skin and remove the wrinkles after losing 224 pounds on a crash diet.
But when she woke up after the operation she found doctors had put two silicone implants into her breasts, increasing their size from a C cup to a D. Doctors said the woman should not complain as the best way to tighten the skin and remove the wrinkles was to make her breasts bigger.
.
Man Held On $1M Bond For $21 Theft
Cincinnati Man Held On $1 Million Bond On $21 Theft Charge From 18 Years Ago
(AP) A man arrested in Cincinnati on a charge of disorderly conduct remained in custody Friday because a judge refused to reduce a $1 million bond that was imposed on a charge he stole $21 in products nearly 18 years ago.
Gary Weaver, 41, of Owingsville, Ky., was arrested Wednesday, and court officials found out that there was a warrant for him from 1990. But the judge refused to reduce the original bond, which was imposed after Weaver allegedly used fake rolls of dimes to pay a store for a $21.64 purchase. The store found that the coin rolls were filled with pennies, with dimes on each end.
.
Man jailed for bogus emergency calls
A British man who said he loved seeing flashing lights was sentenced to four years in prison Monday for making scores of bogus calls to emergency services. Police labeled David Mason, 57, of Bolton, Greater Manchester, the worst phone hoaxer in all of Britain for costing taxpayers as much as $2 million in false alarm charges.
Mason pleaded guilty in Bolton Crown Court to 13 counts of causing a public nuisance.During one 16-month period, police say Mason made an average of one call a week sending police and paramedics to non-existent brawls, blazes, car accidents and bomb alerts. Mason even kept a diary, which police say included tape recordings of bogus calls he made to the emergency services, of his "work." Police say after his arrest Mason told them he derived "excitement" from seeing fire trucks, police cars and ambulances arrive near his home with their lights flashing.
.
BMW's war on dog pee
A dog may be man's best friend but a gleaming new car is often man's pride and joy – and never the twain should meet. But canines now face a shock if they do their business over their owner's new Beamer. Electric shock technology unveiled in the latest BMW should ensure no peeing poodle feels too cock-a-hoop after cocking a leg. A pet that relieves itself over the new model's wheels will get quite a buzz out of it – as an unpleasant 200 volts shoots through its body.
.
Donated Organs Lead To Cancer Deaths
Long Island 15-Year-Old's Family Unknowingly Gave Up Body Parts Containing Rare Lymphoma. Two Have Died; Two Others Facing Chemotherapy
They thought they were helping others by donating their son's organs. Instead those organs spread a rare, undiagnosed form of cancer.
Alex Koehne passed away a year ago from lymphoma. Since then, two of the 15-year-old donor's recipients have died and two others are battling the same disease. Exactly one year later Jim and Lisa Koehne of Sag Harbor are reliving their son's death.
Alex Koenhe's parents thought the 15-year-old died of bacterial meningitis. It turns out that horror was just the beginning of a far greater nightmare.
Posted by The Man at 4/01/2008 1 comment: