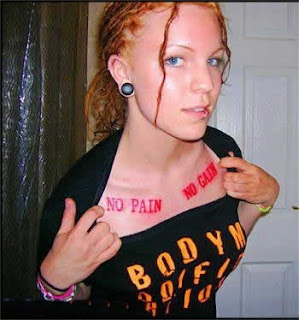 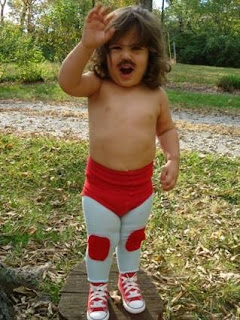 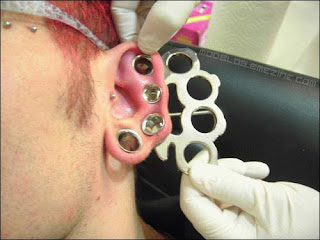 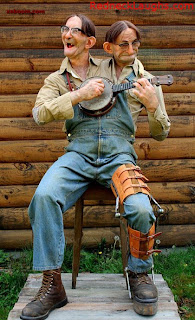 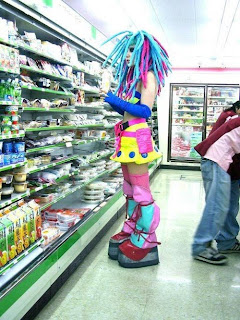 Q: Is there an Iowa law that if you have to wait 30 minutes or longer to get your driver’s license you get it for free?
.
A: Surprisingly, yes. It’s call the money back guarantee, said Dena Gray-Fisher, spokeswoman for the Iowa Department of Transportation. But it comes with some conditions. It’s only for license renewals for drivers without problems or special conditions. So the guarantee doesn’t apply to someone who has lost his or her license for drunken driving, non-payment of fines or first-time drivers.
Posted by The Man at 8/07/2008 No comments: 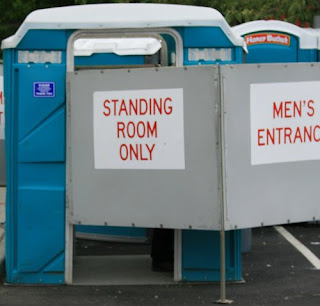 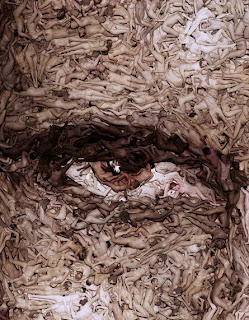 What do you see in this picture

I normally don't post this kind of material however, this guy asked me. 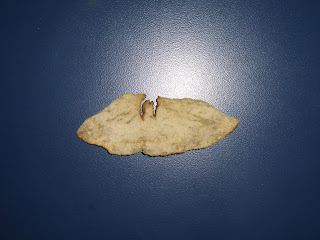 The day before "The Dark Knight"was released,
a co-worker of mine was eating lunch and showed me this chip he found in his lunch.
we immediately took pictures of it and posted it on Craigslist just for giggles.
I was hoping you could post this on Small Bits and Pieces to get a better world wide viewing.
I’ve been reading your blog for almost 2 years and I would be honored to have a posting.
We still have the chip on display where I work and people are amazed by it all the time.

Man With Play-Doh Bomb Arrested After Standoff
Matthew Alexander Rivera, 27, of Hope Mills, was arrested by the Fayetteville Police Department after a standoff at "Priscilla's" at 3800 Sycamore Dairy Road.
Officers responded to a possible robbery. Upon arrival they were notified that the subject was still inside the business with the store manager, and was in possession of a device that appeared to be a bomb.
Nearby businesses were evacuated and roads near the business were blocked off to traffic.
Officials say Rivera surrendered without further incident. He is charged with second-degree kidnaping and perpetrating a hoax by use of a false bomb. The Fayetteville Observer reported that the bomb was made out of Play-Doh, batteries and a wire arranged to look like an explosive.
.
Man With Chicken In Pants Arrested
Officer Noticed Unusual Buldge In Man's Pants
A man with an unusual bulge in his pants was arrested in front of a Wal-Mart Supercenter in Palm Springs when he admitted he was trying to steal chicken, police said.
Timothy Yates, 46, was booked on suspicion of possessing stolen property and taken to jail, where he was locked up in lieu of $5,000 bail, police said.
Sgt. Mitch Spike said an officer at the store asked Yates if he had anything on him that the officer should know about. "It surprised the officer when Yates lifted up his shirt and removed a 3 1/2-pound package of Foster Farms chicken breasts from the front of his pants," he said.
.
111-year-old to be first-time father
The high-profile sex romp early this year of Henry, hit the world headlines in March when he finally proved his manhood at 111 years old.
He had never shown an interest in mating until he was caught getting intimate with the much younger Mildred, aged 75.
PICTURE and More
.
Police arrest naked man
While on patrol Monday evening, an Indiana cop noticed a naked guy standing in the window of a Fort Wayne home. So she approached the man's front door, which was wide open, to investigate further. It was then that Officer S. Hughes and a colleague were treated to the sight of a prone Ronald Miller, 56, engaging in a remarkably lewd act on his living room sofa. For the dirty details, you'll have to read the Fort Wayne Police Department report, which notes that Miller is apparently handy with a claw hammer and some motor oil. Miller, pictured in the mug shot at right, was arrested on a felony indecency charge. A neighbor told cops that Miller was "not right" and parades around naked "24/7."
.
Woman Thrown on Live Commuter Rail
A British commuter was thrown on to a railway line after she told two youths to stop smoking on a station platform on Wednesday.
The woman, whose identity is not known, suffered burns and broken collar bone. She was taken to the hospital after the incident, at Farningham Road station in Kent during the rush hour shortly after 7a.m.
South Eastern train services between Kent and London were disrupted because the power had to be turned off.
The woman had asked the youths to stop smoking on the station platform, where smoking is banned, the train company said.
A scuffle started and she was thrown on to the track before fellow passengers dragged her off.
British Transport Police, who are studying CCTV footage of the incident and were said to be following up a number of leads, said the woman was lucky to be alive because the "live" rail was carrying 750 volts of electricity.
.
'Dead' Man Awakens Before Autopsy, Shocks Doctors
An Indian man who was knocked unconscious during a stampede of thousands of religious pilgrims on a steep Himalayan mountain path woke up as doctors were preparing to perform his autopsy.
Mange Ram, 19, lost consciousness in the stampede that killed 150 people and was triggered by rumors of a landslide leading to a Hindu temple devoted to the goddess Naina Devi.
"When I woke up, I was in the middle of a row of bodies waiting for post mortem," he told the Times. "My throat was parched and I asked for water. Towering over me the doctors and nursing staff at Anandpur Sahib Civil Hospital looked dazed. They must have been surprised to see a dead man come alive like that."
Posted by The Man at 8/07/2008 No comments: