Stink bomb gas to give stroke victims new hope
The gas that provides millions of schoolchildren with hours of fun and gives stink bombs their revolting smell could soon provide doctors with new treatments for conditions ranging from strokes to chronic arthritis. Some researchers are even trying to use hydrogen sulphide - the source of rotten eggs' unpleasant odor - to put patients with strokes or serious injuries into a form of suspended animation to help them survive severe traumas. This research is now being backed by the US military, who believe it could help their surgeons cope with injuries suffered by soldiers in battle.
'Hydrogen sulphide is made in very low doses in the body and, far from doing harm, it has become clear that it can do a great deal of good,' said Dr John Wallace, a pharmacologist at the University of Calgary in Canada. 'It is found in the brain and is also thought to control blood pressure. It is quite pervasive, in fact.'Hydrogen sulphide is corrosive, foul-smelling, flammable and deadly in sufficient concentrations. A single breath can kill. Yet the gas has recently become a buzzword in scientific circles following discoveries that in tiny doses it plays a significant role in influencing some chemical pathways in the body.
Posted by The Man at 6/09/2008 No comments:

In the west of Scotland, in the towns and villages surrounding Glasgow, there is a delicacy available in some of the fast-food outlets. It’s called the Munchy Box (sometimes just Munch Box) and it’s a sight to behold. 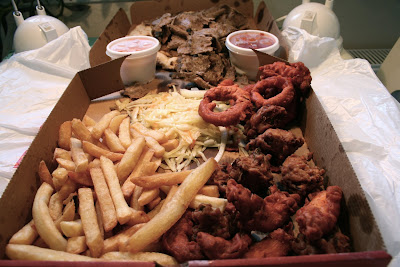 From Tandoori Nights, Stonehouse
Posted by The Man at 6/09/2008 No comments: 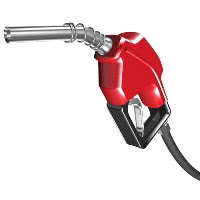 With gas prices — and driver frustration — soaring, here are two Web sites that help track national prices and best value near you:
.
AAA's Fuel Report — Web site tracks the daily national average price of unleaded gasoline.
.
GasBuddy — Web site searches for the cheapest unleaded gas prices in your area.
.
Posted by The Man at 6/09/2008 No comments:

Man jumps 10,000 feet from plane with camera but no parachute
A 29-year-old man body was found next to a house with a damaged roof, police said.
Sloan Carafello of Schenectady, who was observing on the flight, followed an instructor, student and videographer out the door, wearing no skydiving gear, officials said.
Police said they did not suspect foul play but would not elaborate.
Robert Rawlins, pilot and owner of the Duanesburg Skydiving Club, said he was flying the single-engine plane and had begun to close the door when Carafello jumped.
His body was found next to a house west of Albany.
.
Child's Kiss of Deaf
This is a story about a kiss - an expression of love so potent from a little girl -- that it caused her mother not only to lose her hearing in one ear after a buss on the ear, but to be thrust into the pages of medical history. Yet it wasn't the sound of the smackaroo that damaged the hearing of Hicksville homemaker Gail Schwartzman, but a suction force that displaced the woman's eardrum, paralyzed a tiny trio of bones and left residual sounds in her head. Schwartzman's case will be the subject of a medical journal report within the coming weeks, outlining for the first time what the author calls "the kiss of deaf."
.
Man masturbated while laughing at us
Police used a laser to measure exactly how far away a suspect was when witnesses said he masturbated and laughed at them.
The 44-year-old man is charged with exposure of sexual organs, a misdemeanor.
Witnesses said he was standing just inside an opened second-story window of a residence on Wright Parkway, holding the organ in his hand and laughing, according to a police report.
When police went into the residence, the man was lying on a bed in the upstairs bedroom and said he was just preparing for a post-shower nap. His hair was not damp, though, police said, and it did not appear that he had recently showered.
The distance between the witnesses' doorstep and the man's bedroom window was 80 feet, an officer said after measuring it with a certified laser instrument.
The man later told a detective he was urinating out of his bedroom window.
Posted by The Man at 6/09/2008 No comments: