When you don’t want to be a Stock Broker

When Things Go From Bad To Worst 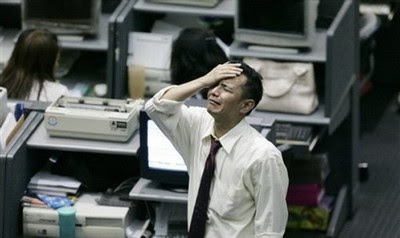 Why do the brokers always put their hands on their faces when things go from bad to worst? 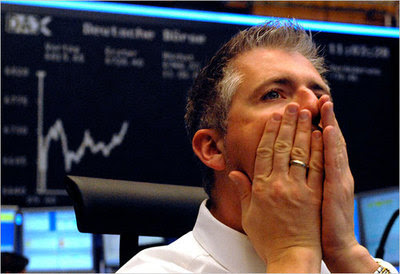 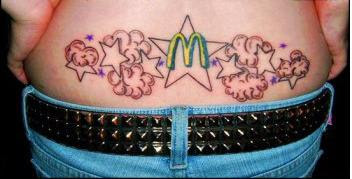 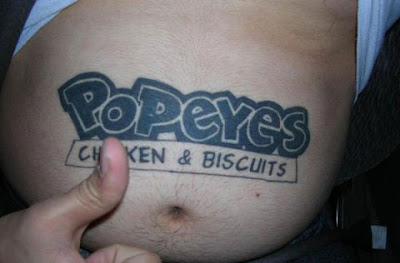 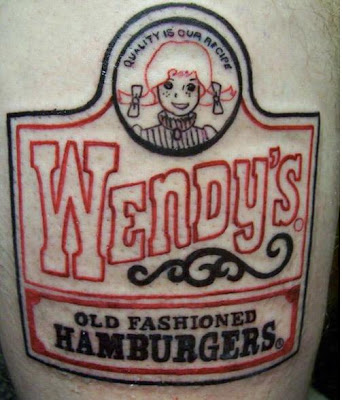 Anne said...
Tatoos ( plural)
Not tatoo's. (possessive)
.
Well Anne you got me again with this apostrophe.
However, I have you again with the spelling it's Tattoos
.
Mad Izatie said...
Oh man, Anne keeps getting pwned.
I'm surprised it happened twice.
.
Posted by The Man at 10/12/2008 No comments:

It is an unenviable title - but India's motorized mayhem has officially made it the most dangerous place to drive in the world.
Delhi alone has 48 different "modes of transport" including cows, elephants and camels, as well as cycle-rickshaws and SUV’s.
.
CRAZY!!!!
Posted by The Man at 10/12/2008 No comments:

Wife poured boiling water on husband's groin
Authorities say a woman has been arrested in west Florida after pouring scalding hot water on her husband's groin. Manatee County Sheriff's Office deputies arrested a 52-year-old woman on Wednesday on a charge of aggravated battery with great bodily harm.
Maverna T. Turay, 52, admitted to boiling a pot of water just after 1:30 a.m. and pouring it on her husband groin while he slept,
He sustained second degree burns and ran out of the house screaming while a relative called 911, according to a sheriff's report.
The man was flown to a Tampa hospital for treatment. The report said the woman did not give a reason for pouring the water on her husband, but said she had been drinking alcohol.
.
Maybe she wanted to make him "sterile."
Maybe she wanted to turn him into a hunk, a hunk o' burning love.
.
Before I pull your wisdom tooth, you must run to the ATM
When David Baxter arrived for an emergency appointment at the dentist, he expected his painful nightmare would soon be over.
But the 58-year-old teacher was told after being injected with anaesthetic that the offending wisdom tooth would not be removed until he had paid for the treatment in full.
Having already withdrawn his daily maximum from the ATM, and with only £30 in his wallet, he assured the receptionist that he would return first thing the following day with the extra £30.
But with his face numb from the forehead down, he was forced to leave the dentist's surgery to return home for another cash card.
After supplying the money he had to spend a further 40 minutes in the waiting room before the dentist would see him again - by which time the anaesthetic was beginning to wear off. By the end of the operation, he was in agony.
.
Argentine partygoers lured into clubs with breast enlargements
It is a raffle with the ultimate booby prize. For the cost of an entry ticket to an Argentine disco - between £2 and £8 - partygoers are entered into a prize draw in which the winning ticket is worth more than £1,000. The jackpot? A breast-enlargement operation.
Promoters across the country are putting up signs with slogans such as "I want my breasts" as a new way of attracting women - and men who could give such a gift to their girlfriends or spouses - to their clubs.
.
Two arrested after "SEX" incidents
One man has attacked a police officer with a dildo at the Bathurst 1000 motor racing event while another man has been caught wheeling around a television set showing porn.
And both have been thrown out of the major annual racing event, police say.
A 22-year-old Moss Vale man was arrested yesterday after launching himself at a male police officer sitting inside a police car, hitting him on the head with a sex toy.
The officer was not hurt, but the man has been charged with assaulting police.
Earlier in the evening, a 35-year-old St Helens Park man was arrested after police found him wheeling around a television set showing porn.
.
Mexican Pot Growers Are Polluting American Wilderness
National forests and parks — long popular with Mexican marijuana-growing cartels — have become home to some of the most polluted pockets of wilderness in America because of the toxic chemicals needed to eke lucrative harvests from rocky mountainsides, federal officials said.
The grow sites have taken hold from the West Coast's Cascade Mountains, as well as on federal lands in Kentucky, Tennessee and West Virginia.
Seven hundred grow sites were discovered on U.S. Forest Service land in California alone in 2007 and 2008 — and authorities say the 1,800-square-mile Sequoia National Forest is the hardest hit.
Weed and bug sprays, some long banned in the U.S., have been smuggled to the marijuana farms. Plant growth hormones have been dumped into streams, and the water has then been diverted for miles in PVC pipes.
Rat poison has been sprinkled over the landscape to keep animals away from tender plants. And many sites are strewn with the carcasses of deer and bears poached by workers during the five-month growing season that is now ending.
.
Posted by The Man at 10/12/2008 No comments: