Elderly Man Strapped To Oxygen Tank Robs Bank
Authorities say a well-dressed elderly man carrying an oxygen tank has robbed a bank in the California beach town of La Jolla.
San Diego police Sgt. Ray Battrick says the suspect presented a demand note to a teller at the San Diego National Bank Saturday. He fled with an unknown amount of cash.
Battrick says it's unclear whether the suspect had a weapon.
The robber is described as a tall man in his 70s with white hair, a gray mustache and glasses. He was wearing a white beret, argyle sweater and brown sports jacket.
Battrick says the oxygen tank was in a black bag and connected to the man's nose with plastic tubing.
PICTURE
.
Parents accused of dumping daughter's body in concrete
An eight-year-old French girl who was reported missing by her parents last week has been found encased in concrete at her father's workplace in Le Mans, northern France.
The parents of the girl, who had mild Down's syndrome and has been named only as Marina, have been arrested and placed under official investigation for murder.
The father first claimed Marina had disappeared, saying he had left her for a couple of minutes asleep in his car in a McDonald's car park, and that she was no longer there on his return. He later claimed the child died of natural causes.
But prosecutors allege Marina, who was slightly physically handicapped, died after being beaten and that the body was kept in the freezer before being covered in concrete in a Mafia-style attempt to hide her corpse from the police.
Update: Parents who claimed their disabled daughter had been kidnapped are charged with her murder.
.
Wal-Mart Porno Prank
Most people go to Wal-Mart for their low prices, but shoppers at the Fort Smith, Ark., location got an eyeful when two enterprising twenty-something's placed a porno DVD into a player that connected to the store's TV's.
While it's certainly one way to test TV's, police have charged Cody Allen Sexton and Kenny Dean Andrews, two young Oklahoma guys, with felony obscenity complaints.
The X-rated DVD played on at least six televisions, and was removed when a customer notified a Wal-Mart store manager.
Police Sgt. Levi Risley says the two thought they were just pulling a prank.
.
Posted by The Man at 9/14/2009 No comments:

Amitjo Kajla, 22, today won her case against
HM Prison Service after she was unfairly dismissed for being too sexy
.

.
.
What Nerve!
Blonde Beats Speeding Tickets with “I’m Pretty Sign”
Her friends told her to paint "ATTN: Police Please Do Not Pull Me Over Just Because I'm Pretty" on the rear windshield of her car because the bubbly blonde was constantly being pulled over. Dasha, a Washington state resident who wasn't willing to give her last name, claims to have been stopped by police for speeding 30 times in the cities of Bellevue, Kirkland and Seattle, and only received two citations — both of which were dismissed.
Good luck? Maybe good looks are more like it. 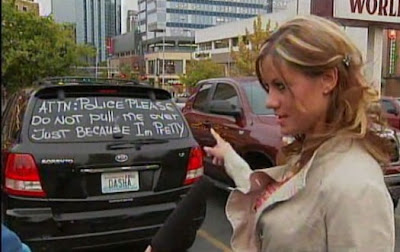