Pastor issuing 7-day sex challenge
The pastor of a mega-church says he will challenge married congregants during his sermon Sunday to have sex for seven straight days - and he plans to practice what he preaches.

Girls Locker Room Prank - NSFW
Girls play a prank on guys as if they went into the wrong locker room. 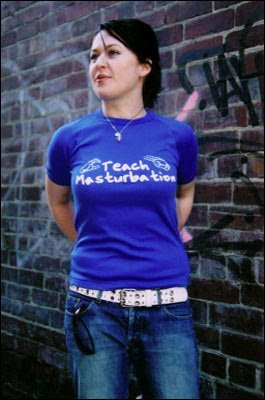 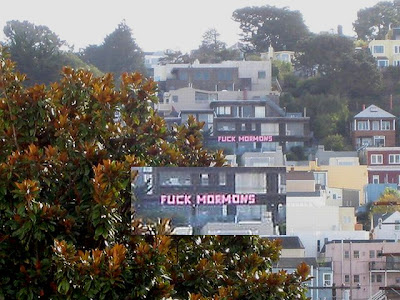 Yeah! You Been Caught 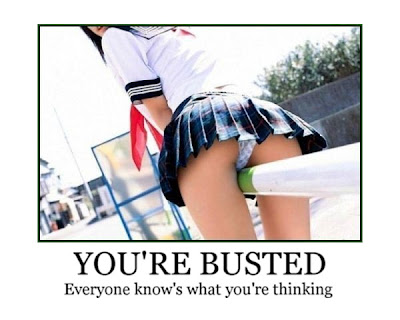 Michigan Minister Sent to Prison for putting the fear of God in a Judge
The American Civil Liberties Union is taking up the case of a southwestern Michigan minister who was sent to prison for warning that a judge could be tortured by God.
The ACLU said it asked the state appeals court Wednesday to release the Rev. Edward Pinkney on bail while he appeals a probation violation. Lawyers claim his free-speech rights were trampled in Berrien County.
In 2007, Pinkney, 60, was convicted of paying people to vote in a Benton Harbor election.
Months later, he wrote an article in a Chicago newspaper, People's Tribune, saying the judge who handled his case, Alfred Butzbaugh, could be punished by God with curses, fever and "extreme burning" unless he changed his ways.
In June 2008, another Berrien County judge, Dennis Wiley, sent Pinkney to prison for three to 10 years after finding that he had violated his probation by making a threat against the judge.
"Those are words that would ... put the fear of God into anybody.
.
First Amendment
Posted by The Man at 11/13/2008 No comments: 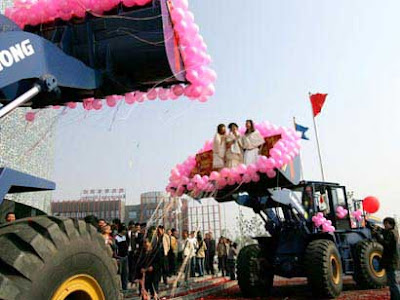 A Chinese couple got married in mid-air in two end loader buckets.
The idea was to honor a tradition in Xi'an that the bride's feet shouldn't touch the ground during the journey from home to the ceremony.
Organizer Fan Yalin said the usual way of following the tradition was for the groom to carry the bride in his arms from the car.
But as the groom sells heavy machinery for a job, his colleagues came up with the idea of having them stand in two tractor buckets.
The bride and two bridesmaids were in one and the husband and two best men in the other.
The couple said they loved the novel ceremony, describing it as "dangerous but sweet".
While one guest, a Ms Yang, was quoted as saying: "It was really cool to have a tractor bucket marriage. Very interesting."

FLORIDA NEWS
.
Man hit in groin at batting cage awarded $1.2 million
Man, that musta really hurt.
And a Miami-Dade jury agreed.
So the jury awarded almost $1.2 million to a 21-year-old guy who was hit in the groin by a batting-cage pitch.
Lhyvann Felipe was 19 years old when struck by a 60 mph pitch and landed in the hospital.
The ball struck him after an employee asked him to go back into the batting cage to help pick up the balls.
The machine, which had already completed the cycle and did not have the lights on, spit out the ball, which hit him.
The jury decided that the Sluggers batting cage operation at Tamiami Park in West Miami-Dade negligently failed to properly supervise its employees.
The judgment called for Felipe to be paid $160,000 for medical expenses and $1 million for pain and suffering.
Yeah, the million sounds about right.
.
Suspects try to write dirty word in the road but can't spell it
Oh, f ---.
But wait. How do you spell that word?
Evidently, it was beyond the capabilities of some alleged thieves in Mary Esther.
Cops say a trio of spelling-challenged folks boarded a boat and stole several items, which they used to vandalize the area.
The suspects took one flashlight, two flare guns and some flares, a fire extinguisher and a radio.
They then sprayed the fire extinguisher into a mailbox, before using it to spray an expletive in the road.
We're not gonna write the word here. You know it.
It contains four letters. But in this case, it was missing the last letter -- a "k."
Even though the letters could be washed off the roadway and the word was spelled wrong, the suspects will face criminal mischief/graffiti charge, the cops say.
If they catch 'em, we recommend a remedial spelling class as part of the sentence.
.
Man can't identify couple -- because he only saw them naked
He knew what the couple was doing. He just didn't know how to describe them.
So when the witness tried to identify the Panama City duo to cops, words failed him.
The couple was having sex but he couldn't tell cops what they looked like, the witness said.Because they were totally naked.He could only describe them as a light-skinned black man and a white woman.
After a short search around the area, the officer found a couple matching the description at McKenzie Park.
A check of their ID's showed they both had warrants for failure to pay fines.
.
Beer guzzling guy accused of urinating in church
You know what they say about beer. You only rent it. You never buy it.
So when a Fort Pierce guy guzzled a case -- yes, a case of beer -- on his birthday, all that booze had to go somewhere, so he just peed at church
A cop noticed Raymond C. Kersey "urinating on the entrance," the cop report states.
"I asked him for his name and if he had any identification on him and he just stared at me, appearing to be lost," it also states.
Kersey, who smelled of alcohol, had bloodshot eyes and turned 52 Tuesday, had difficulty standing in one place and tried to walk away from the cop.
Big mistake.
As the officer took Kersey to jail, Kersey said he’d imbibed a case of beer.
Amen to honesty.
.
Portable urinal disguised as golf club
A Miami Beach, Fla., urologist said he has invented a stealth urinal resembling a golf club for players too busy to stop their game to relieve themselves.
Dr. Floyd Seskin, 49, said he invented the UroClub, which is designed to look like a 7-iron and fit in a golf bag, after hearing a story from a former patient about having to relieve himself in the woods during golf games due to his prostate condition, the New York Daily News reported Wednesday.
"I wanted people to feel a level of comfort," Seskin said. "Worry where the pin is, not where's the next bathroom."
The urologist-turned-inventor said the UroClub features a wide opening on the top and a handle that can hold about a half a liter of liquid. He said it comes with a golf towel that can attach to the club and a golfer's belt for privacy.
"You can do it anywhere," Seskin said. "It looks like you're practicing your swing or something."
.
Police: Fort Lauderdale Florida girl shot peer in crowded school hall
A sophomore high school student shot and killed one of her peers after an argument in a crowded hallway between classes, then walked to a nearby restaurant to call authorities and turn herself in, police said.
.
Posted by The Man at 11/13/2008 No comments: