Walking to a friend’s house, Jared Medeiros was set upon by a group of men who left him battered and bruised.
. 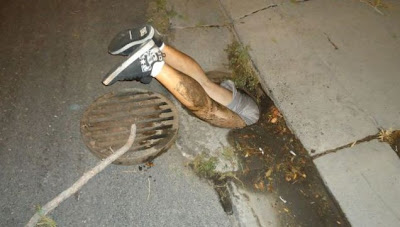 .
And, adding insult to injury, his phone was then chucked through a manhole cover by the attackers.
But the 21-year-old refused to accept the phone was gone and decided it would be a good idea to stick his head down the drain to retrieve it and call police.
It was not a good idea. He became stuck fast – and the alarm was raised only after he had been in there screaming for about 40 minutes.
‘I was concerned but I was also laughing – it was funny!’ said Brianna Mooney, 16, who called the emergency number
Mr. Medeiros was freed by firefighters, who spent hours trying to pull him out.
He said he had been beaten and kicked by four men.
‘I don’t understand why they would sit and take pictures,’ said Mr. Medeiros. ‘That kind of p****s me off.’
Posted by The Man at 8/01/2011 No comments: