The latest 'tear' jewelry which hangs from your eyeball 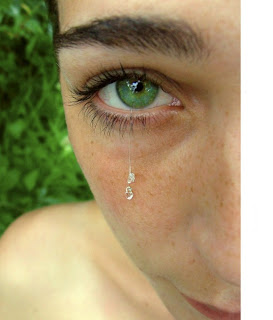 First it was tattoos, then it was body piercing, but the latest fashion craze looks so painful it's literally eye-watering.
In the frenzy to come up with something different one designer has created a line of jewelry which is intended to be worn on the eyes.
The bizarre range features a number of adornments which hang on wire from contact lenses.
Users attach a range of accessories, such as crystals and flowers, to the new prescription or dummy lenses and wear them throughout the day.
The jewelry, which measures up to 14mmx33mm, is attached to the contact using medical wire and hangs below the eye.
Posted by The Man at 10/04/2008 No comments:

Idiot's Are Born Every Day 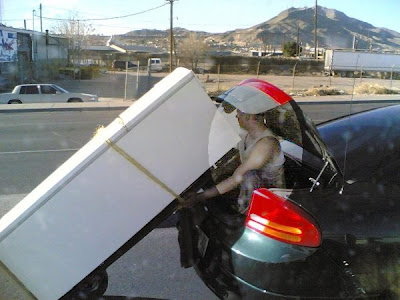 A man holding a 2-wheel cart with a fridge on it. 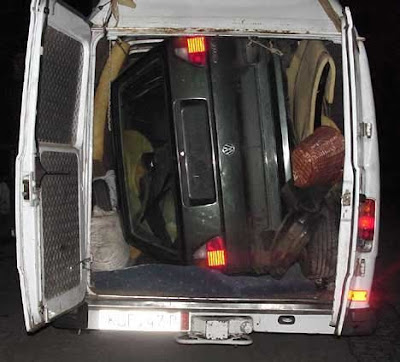 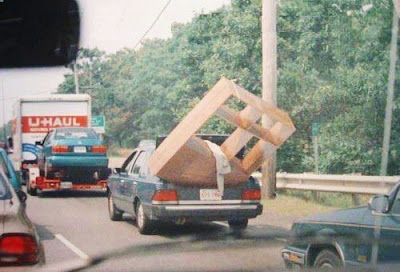 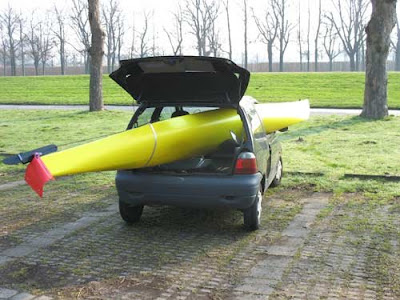 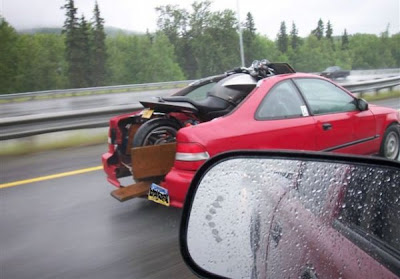 A motorbike
.
Anne said...
Idiots
No apostropohe.
.
I must be an "Idiot"
English was not one of my better subjects in school.

Anne must also be an idiot its apostrophe not apostropohe.
.
Mad Izatie said...
Anne got pwned.
Posted by The Man at 10/04/2008 No comments:

The place where food is extremely non-cholesterol-free and taking a chance to go to the emergency room maybe worth it.
Find Out Why 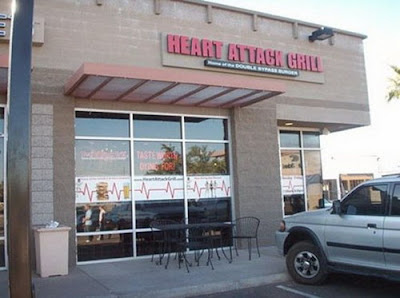 Making 4,096 Noodles
A clip from Philip Morrison's 1987 PBS program "The Ring of Truth: Atoms" featuring chef Kin Jing Mark making noodles to demonstrate the principle of halving.
This also may explain how the population in China grew to 1.3 billion.
.
.
But waiter - There are only 4095 Noodles.
Posted by The Man at 10/04/2008 No comments:

Surveillance video shows the bear standing on hind legs to open door,
At one point the bear can be seen coming around behind the counter to sniff at the ingredients.
Rebecca Branton, an employee, is seen making a run for the bathroom, as the bear wanders around the Subway restaurant in Kitimat, British Columbia, Canada.
His every move was caught on the shop's nine video cameras.
It was tranquilized by conservation officers and relocated.
.

GPS hones in on bank robbers loot
As three men raced from a Thursday morning robbery at a bank on Schoenersville Road, they didn't know about the small electronic devices tucked among the piles of cash they had grabbed at gunpoint.
They soon discovered them, but the little GPS units had already alerted police to the robbers' every move. On their screens at the Northampton County 911 center, dispatchers tracked the men as they sped away from the KNBT bank in Hanover Township.
As the robbers made their getaway, they threw out cash and at least two of the devices, Seiple said. Police radio reports said the men ditched their stolen getaway car along Woodside Road in Hanover. But, police said, a third tracking device soon led them to an Allentown home at 12th and Tilghman streets. Police and FBI agents surrounded the home and arrested three men matching the description of the robbers.
News Video
.
Man crashes car while trying to roll joint
A 24-year-old Newark man whose truck was seen swerving across the roadway allegedly told an officer – after a pursuit – that he had been trying to roll a marijuana cigarette, New Castle County police said.
Shawn E. Jones, of the 500 block of E. Hanna Drive, was charged with drunken driving, possession with intent to deliver narcotics, disregarding an officer’s signal, maintaining a vehicle for keeping a controlled substance, possession of marijuana, malicious mischief by a motor vehicle, reckless driving and no proof of insurance.
Picture and More
.
Couple Beaten to Death in Bizarre Stop-Smoking Ritual
Police spokesman Ku Chin Wah told the official Bernama news agency that Mohamed Ibrahim Kader Mydin, 47, and his wife Rosina Mydin Pillay, 41, sustained head injuries in a beating intended to cure them of smoking and other illnesses.
The 15-year-old daughter of one of the four relatives who participated in the beating was also attacked and is fighting for her life in a hospital.
Police said that Mohamed Ibrahim asked family to help him kick his smoking habit, and confided in relatives that his wife was suffering from asthma and a liver ailment.
"Following this, a 23-year-old male relative suggested that the couple undergo a ritual which involved all family members joining forces to beat up the couple to rid them of their ailments.''
.
Victim Purposely Smashes Her Motorbike Into Purse Thief
A feisty Malaysian woman went to extremes when her purse was snatched by a motorcycle-riding thief. But she wasn't giving up her prized possession so easily. She gave chase on her own motorbike!
Possibly inspired by Angelina Jolie's bike chase in Tomb Raider the determined 41-year old woman chased the snatcher for 100 meters. After driving the thief down she intentionally crashed her bike into his, causing them both to fall off. She then screamed for help, attracting passerby’s who apprehended the man.
The robber was handed over to police, who believe he was also involved in other purse snatching cases around the Cukai area of Northeast Malaysia.
How many women would have the guts to do something like this?
.
Angry Women
These stories represent some of the most crazed bitch-fighting women.
Video’s
.
Thanks Chris
.
.
.

Parents accused of teaching kids to smoke pot
A father and stepmother from Walworth are accused of teaching their young children how to smoke marijuana. Mathew and Ashley Mathias are charged with child neglect for providing marijuana to the father's 9-year-old son and 3-year-old daughter when the family lived in Madison. A criminal complaint says they also blew marijuana smoke in the face of their 1-year-old son and let him lick a marijuana pipe. The 9-year-old boy told investigators that between the first and fourth grades, he smoked marijuana more than 30 times.
In Dane County Circuit Court Thursday, the Mathiases were ordered to have no contact with the three children. Mathew Mathias is also charged with delivering marijuana to minors and both are charged with possessing drug paraphernalia.
.
O.J. Simpson Found Guilty on All Charges
O.J. Simpson, who went from American sports idol to celebrity-in-exile after he was acquitted of murder in 1995, was found guilty Friday of robbing two sports-memorabilia dealers at gunpoint in a Las Vegas hotel room.
The 61-year-old former football star could spend the rest of his life in prison.
A weary and somber Simpson released a heavy sigh as the charges were read by the clerk in Clark County District Court. He was immediately taken into custody.
Pictures and More
Posted by The Man at 10/04/2008 No comments: