Being Crazy and Stupid

Australian Glenn Franks got a nasty surprise when he tried to soothe his sore throat but found a cockroach in his Nestle cough sweet.
. 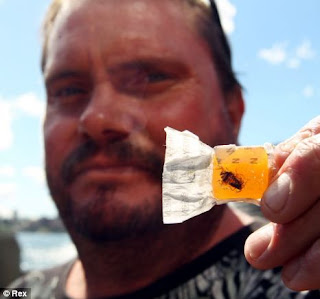 It was a lucky escape for the 37-year-old who was almost left with a horrible taste to swallow after buying the sweets with a dead roach inside from a convenience store.
The dead pest was preserved like an ancient bug in amber, embedded in one of the Nestle Butter Menthol drops.
'I was about to put it into my mouth when I saw it,' said Mr. Franks.
'I went straight back into the store and showed the guy I bought if off just to make sure.'
The unlucky customer made a call to Nestle who asked him not to go to the media and offered a 'modest' amount of money.
A spokesperson for Nestle said that the food company was concerned about the discovery and wished to obtain the cough sweet for testing.
Posted by The Man at 4/13/2011 No comments:

Car thief asks cops for help
An man was arrested after he allegedly showed up at a police station in a stolen car looking for help to buy gas.
, Assistant Chief Mike Reitan tells that the 19-year-old man from , showed up at the station Monday morning asking for a gas voucher. Police work with a local charity to provide such vouchers to people in emergencies.
Reitan says the man told police he was trying to get to to attend a funeral. When the car he was driving turned out to be registered to a convenience store, authorities checked and discovered the vehicle had been stolen.
Reitan says that put an end to the gas voucher discussion. Officers took the man to jail.
.

Children suspected in theft of 2,500 rubber ducks
Two children are believed to have stolen and scattered 2,500 rubber ducks from the in southwest suburban Yorkville.
The ducks are used for the annual Duck Pluck event, which is a major fundraiser for the academy. After the theft, the rubber ducks were scattered all over , according to police.
The case has been referred to prosecutors for charges. If charges are filed, the suspects' names will not be released since they are both under 18.
.

Police sniff out Billions buried in garlic fields
South Korean police have sniffed out a total of 11 billion won ($9.6 million) in cash buried in remote garlic fields and have confiscated the haul.
Plastic containers brimming with jaw-dropping wads of cash being excavated one after another in the south-western city of .
Media reports said two brothers who had made the money from an illegal Internet gambling operation asked their brother-in-law, surname Lee; to hide the cash as police began closing in on them.
Lee, 53, bought the garlic field and buried the cash at dusk or dawn, pretending to be working on the land.
..

Victim was asked to buy back his own tools
Police say two people swiped tools from a central home then unwittingly tried to sell them back to their owner at his place of employment.
West York Police say the victim was approached by two people at a service center trying to sell him some tools. The victim thought the toolbox looked familiar and went home to find he'd been robbed.
Police soon arrested 34-year-old Cody Lee Littrell, of Hanover, and 32-year-old Rebecca Erinn Dice, of Dillsburg. Both face charges including theft and receiving stolen property.
.

Passengers tries to check dead cow onto flight
A couple tried to check a dead cow onto a transatlantic flight, Virgin Atlantic has revealed in a list of the most bizarre items passengers have attempted to bring onto flights.
The couple in question arrived at ’s JFK airport with the carcass wrapped up on a trolley and attempted to board a flight from to Heathrow airport in with the dead cow.
Unsurprisingly, staff refused to allow the pair to check in their bizarre luggage.
It’s not just dead cows airport staff have had to deal with, passengers have also tried to bring on items such as car engine, a tarantula and one woman even wanted to bring her own bath onto the plane – again at JFK airport.
.
Posted by The Man at 4/13/2011 No comments:

Two would-be robbers brought a hammer and gun to break into a jewelry display at a store - but ended up leaving empty-handed. Footage from a surveillance camera showed the men attempting to smash and shoot their way into the display cases.
.
.
However their attempts were foiled by reinforced glass which refused to shatter despite their efforts. The men eventually fled, leaving the store without any loot.
.
Posted by The Man at 4/13/2011 No comments: