Blame it on the weather
Bad weather blamed for Scotland having 'more people with ginger hair'
Scotland’s notoriously bad weather appears to be behind why more of the country’s population appeared to be blessed with ginger hair, new research has claimed.
.
Chinese mothers are picked for astronaut training
China could launch its first woman into space as early as 2012, and the candidate will be chosen from the first batch of Chinese mothers to qualified to fly fighter jets.
.
Moviegoer Stabbed After Asking Woman to Silence Her Phone
A man was stabbed in the neck with a meat thermometer after asking a woman to silence her cell phone in a movie theater.
.
Bigger Butts at a Cost
Six women from the Essex County area who wanted fuller bottoms ended up in hospitals after receiving buttocks-enhancement injections containing the same material contractors use to caulk bathtubs, officials said.
.
Going nuts for squirrel pie
.
Posted by The Man at 3/09/2010 No comments: 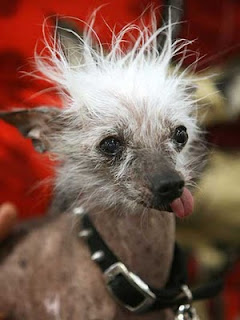 An African sand dog named Rascal has won the Del Mar Fairgrounds Ugly Dog Contest at its first attempt.
The toothless 7-year-old with a mohawk has received similar gongs at other shows before its winning turn at the 15th annual San Diego event.
Owner Dane Andrew said: "I think he's the most handsome dog I've ever seen
"People just say, 'Your dog is ugly'. So we just go with it and have fun with it. He's the best at what he does, I guess. He's ugly."