What a Frickin Dumb Ass!

NEVER Use A Lighter To Look Inside a Fuel Tanker
Posted by The Man at 4/20/2008 No comments: 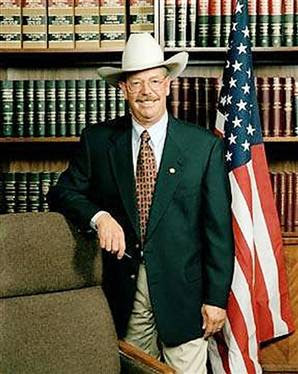 Oklahoma sheriff could be sentenced to 467 years in prison if convicted.
ARAPAHO, Okla. - Authorities have charged a western Oklahoma sheriff with coercing and bribing female inmates so he could use them in a sex-slave operation run out of his jail.
Custer County Sheriff Mike Burgess resigned Wednesday just as state prosecutors filed 35 felony charges against him, including 14 counts of second-degree rape, seven counts of forcible oral sodomy and five counts of bribery by a public official.
Lawsuit alleges favors for sex
A federal lawsuit filed in October claims Burgess told one drug court participant he would have her sent to prison if she didn't comply with his sexual demands.
The lawsuit, filed by 12 former inmates, alleges the sheriff's employees had them engage in wet T-shirt contests and offered cigarettes to those who would flash their breasts.
One prisoner alleged she became a jail trusty with more freedom after agreeing to perform a sex act on Burgess, but lost that status when she later refused.
Posted by The Man at 4/20/2008 No comments:

It's only a Frickin Spider the size of a dinner plate 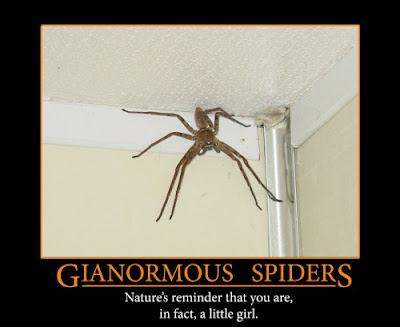 It’s just a burger or is it?

A BLIND man was stranded miles from home after being prevented from boarding a train – because his guide dog "might have fleas". 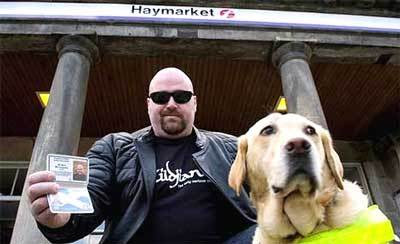 Mark McClenaghan (pictured above), who was unable to board the sleeper from Aberdeen to Edinburgh with his dog Friday, wants an apology and compensation from rail bosses.
He had to catch a later train and then pay out £95 for a taxi to his home in Dalry.
First Scotrail is investigating his complaint. The firm says it has clear guidelines for staff and guide dogs are welcome on all trains.
Posted by The Man at 4/20/2008 No comments:

It’s not what you think!
Drunken idiots throwing themselves down a hill!
I can hear the bones crunching now.
.
.
More of the Craziest Competitive Sports (You May Never Heard Of).
Posted by The Man at 4/20/2008 No comments:

Man bombarded council with 10,000 calls in just four months
A disabled man has been given an ASBO – for bombarding council staff with 10,000 phone calls in four months. Wheelchair-bound Robert Bullough, 59, made 681 calls in just one day and 5,000 over a five-week period – causing some harassed staff to consider quitting. A court has now banned him from all council buildings and from threatening staff or ringing officials, except in an emergency, for two years.
He accepted the number of calls had been "a nuisance", but said they did not cost him a penny – they were free under his broadband package. But moaning Bullough, who called to complain about the cost of home helps, now he says he will write instead.
After the AntiSocial Behaviour Order was made, Bullough said: "If they had helped me in the first place I wouldn’t have had to contact them so many times." He added: "This ASBO doesn’t stop me writing letters – I can write as many as I like."
.
Italian man convicted for staring at woman on train
LECCO, Italy (Reuters) - An Italian man was given a suspended jail sentence for staring too intensely at a woman sitting in front of him on a train.
A judge sentenced the man in his 30s, whose name was not revealed, to 10 days in prison and a 40 euro fine after a 55-year old woman filed a complaint for sexual harassment.
.
Drunk man unaware of knife in his back
A Russian electrician who spent a night with a ten-inch kitchen knife in his back only realized when he got home and his wife saw it.
A drinking pal of Yuri Laylin, 53, plunged the knife into his back after playing a variation on Russian roulette during a boozy night out in Vologda.
In the game, a blindfolded pal was given a knife and made random stabbing motions as his pals danced around him after drinking large amounts of vodka.
Yuri said he had no idea his pal had actually stabbed him and did not feel any pain when he went home.
He only realized what had happened when his wife saw him on the bed with the knife in his back and called an ambulance.
.
Teenager commits sex offences to be jailed with dad
A rapist's teenage son carried out a string of sex offences so he could be locked up with his dad.
Ricky Roberts, 18, who flashed at six women and molested two others, wanted to support his father Dale Burrows, 38, in prison.
Posted by The Man at 4/20/2008 No comments: