Hospital the Blame for Woman Losing Her Hands and Feet 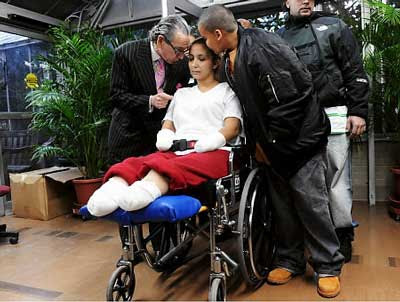 She was a vibrant young mother who went to a Brooklyn hospital for what she thought was a kidney stone. She wound up leaving without her hands and feet because of what her lawyers call a "Huge Medical Mistake." Now, Tabitha Mullings is suing.
It was on Sept. 14 when Mullings came to the hospital suffering from abdominal pain, and had a kidney stone, and a condition with a known propensity for infection.But Mullings' lawyers say there was no blood test. She was sent home, and when her fiancé brought her back the next day, an infection was raging. It choked off the blood flow to her extremities. After gangrene set in, her hands turned black, her feet turned black, all four limbs had to be amputated. "The infection attacked not only her hands and feet, but also the optic nerve which is why she went blind in one eye and half blind in the other eye and is now legally blind as well," Rubenstein said. She will be fitted with prosthetic hands and feet which she'll have to learn to use.
.
Posted by The Man at 11/22/2008 No comments:

Labels: In The News, SUCKS, WTF?

The Miracle of Photoshop 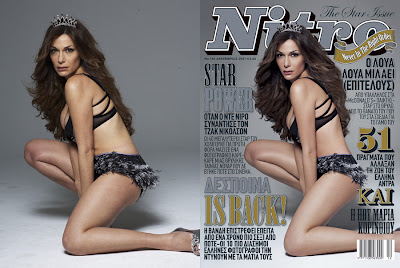 What if body parts were switched 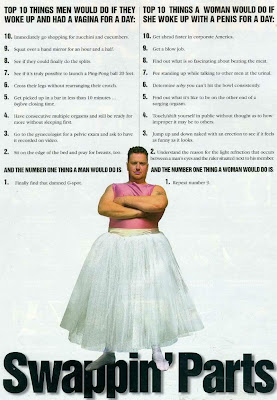 Robber apologizes during store holdup
A thief who robbed a general store apologized to the owner and left the singles behind so workers on the next shift would have something in the till.
The knife-wielding man made off with an undetermined amount of money from Joe's Pond Country Store on Wednesday after threatening owner Jeff Downs.
"I'm very sorry I have do this," he told Downs.
When Downs asked him to leave behind the $1 bills for the morning shift, he agreed.
No arrests have been made, Vermont State Police Lt. Timothy Clouatre said Friday.
"Usually, they're in more of an angry mode, 'Just give me the money and get out,'" he said. "Maybe this is somebody who's just desperate, but isn't a career criminal."
Downs suggested that money is scarce in the wrong places. "Wall Street tycoons can't live on millions and here is this kid willing to be shot or go to jail for a couple of hundred bucks. Something is not right."
.
Job Seeker Gets Arrest
A Jackson, Michigan man who'd been looking for work found trouble after an arrest warrant popped up during a background check at a police station. Police also found cocaine in his pocket. The company the man was applying to required a police background check.
After running the 29-year-old man's name through their computer system Wednesday, police learned he was wanted on a domestic violence charge.
Deputy Police Chief John Holda said that while searching him at the station, an officer found several rocks of cocaine.
The man was being held in the county jail and will be arraigned on the domestic violence charge and possession with intent to deliver cocaine.
.
Man held woman’s dog for ransom
Police are looking for a man they say stole two rings worth nearly $25,000 from a woman after grabbing her dog. Brunswick Maine police Detective William Collins said a woman was walking her Shih Tzu on Monday when a man picked up the dog and demanded the rings if she wanted the dog back.
Police said the victim gave up her rings, and that the suspect fled on foot after returning the dog. The rings were a 6.57-carat sapphire with diamonds valued at $18,500 and a .96-carat diamond solitaire valued at $5,000.
The suspect was described as a professional-looking, clean-shaven white man in his late 20s or early 30s.
.
Naked homeowner gives intruder a spray
Take that ... Walter Mayer with his weapon of choice
A 61-year-old Northern Territory man has stood naked in his back yard and bravely used a garden hose to fight off a teenage intruder.
And when the 20m-long hose could not be extended any longer, he chased the youth down the street in nothing but his birthday suit
But Walter Mayer - a fit and healthy TV repairman - said his actions were not brave. "It was quite foolish when you sit and think about it now," he said.
"I yelled out for him to leave and then barged out the back door. "He then started throwing rocks at me so I grabbed my hose and just sprayed it as hard as I could at his face. "I sprayed him up and down and had the stream going into his eyes so he couldn't see. "He kept throwing rocks and as I got closer with the hose he took off. "I went barefoot and naked right down the street after him - it was like a mad dog chase."
.
Posted by The Man at 11/22/2008 No comments: