Copy-a-cat dog gets caught in a tight spot 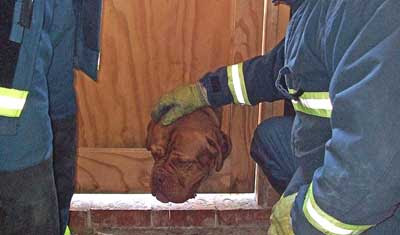 This dog had to be freed by firefighters after getting, quite literally, caught in a flap.
The paw dog – who measures more than 5ft tall on his hind legs – was having a good time trying to imitate his owner's pet kittens.
The 14-month-old mutt, named Moses Chan, was playing with the four cats in the garden while his owner went to the shops.
The pusses passed easily through the cat-flap, coming and going as they pleased.
Big Mo couldn't get a handle on the situation, and plunged himself through the door – getting his head stuck.
Owner Lisa Saberi, 29, said: "He seems to think he's a cat.
"He's always playing with them and tries to eat their food if I’m not watching."
It took 45 minutes for the firemen to rescue Moses by drilling holes around the plastic flap.
Talk about being a copycat! 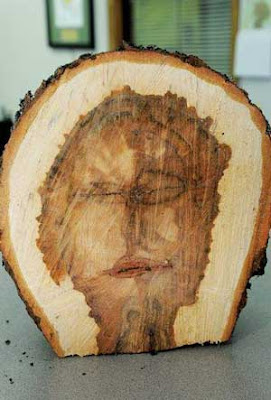 A sawed-off tree limb at a Maryville cemetery turned out to have a mysterious image. The short log has a cut end bearing an uncanny resemblance to a human face.
Ernest Ward, a groundskeeper at Magnolia Cemetery, said it was found Monday as he and co-workers cleaned up debris from a weekend storm.
He said a former worker at the cemetery believes the face is a spirit. "Who he is, I don't know," Ward said.
A section of an oak tree branch with a resemblance to a human face

How stupid they think I am if this true why is it flat on the bottom with a perfect portion face placed in the center.
.
Why don't they show the other piece of wood?
Posted by The Man at 7/10/2008 No comments:

A Tribute to Boobs 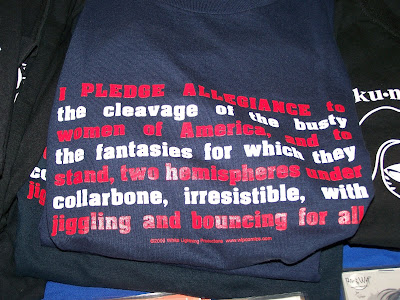 See more funny videos and funny pictures on CollegeHumor
.
.
Mad Izatie said...
If I had a bunny rabbit like that,
I'd be stealing mail just to have the bunny open them.
Posted by The Man at 7/10/2008 No comments:

Cow collect its farts in a plastic tank 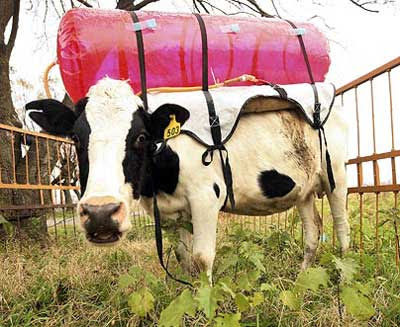 Scientists are examining cow farts and burps in a novel bid to combat global warming. Experts said the slow digestive system of cows makes them a key producer of methane, a potent greenhouse gas that gets far less public attention than carbon dioxide. To understand the impact of the gas produced by cows on global warming, scientists collected gas from their stomachs in plastic tanks attached to their backs.

When you go to jail you shouldn’t get feed quality foods
Inmates at one central Florida jail won't be eating quite as well thanks to budget cuts. Polk County Sheriff Grady Judd announced Wednesday that inmates will no longer get chocolate milk, coffee and juice as he strives to cut $200,000 from the jail budget.
Guests of the county will also get frozen egg patties for breakfast instead of fresh eggs and just one piece of bread instead of two. Peanut butter-and-jelly sandwiches are also off the menu and fresh milk will give way to the powdered stuff. The jail has already substituted crackers for cornbread. Jail officials made the changes with the help of a dietitian. Judd says if inmates want fancier fare, "they need to behave, quit violating the law, and stay out of the county jail."
.
Woman lying in driveway gets run over and killed by police officer
Authorities say a 33-year-old woman was lying in a private driveway when she was accidentally run over and killed by an Alachua police officer. The Florida Highway Patrol says Officer Chad Scott was responding to a report of a disturbance early Sunday morning.
The report says Angela Tanner was lying on the unpaved driveway when the officer tried to swerve his car to avoid hitting her. Tanner was declared dead at the scene. Scott is on administrative leave, and it is unknown why the woman was lying in the driveway.
.
Are you missing any money?
$55,000 found in St. Louis County Jail bathroom. Someone at the St. Louis County Jail was flush with money. A correctional officer at the intake facility at the St. Louis County Justice Center last week found $55,000 stuffed behind a toilet paper dispenser.
The bundle of money was in $100 and $50 bills, said Clayton Police Chief Thomas Byrne.
Officials interviewed inmates about the money, but none admitted knowing anything about the stashed cash. The money was placed in a special bank account until the owner can be determined, Byrne said.
.
Dallas police unaware of cocaine in the car used by officers
Police didn't have to go far to find $400,000 worth of cocaine - it was in an undercover car they'd been driving for two months.
An officer cleaning the car at a patrol station Wednesday discovered the nearly 50 pounds of cocaine carefully hidden in hydraulically controlled compartments.
.
Being worked to death
A Japanese labor bureau has ruled that one of Toyota's top car engineers died from working too many hours, the latest in a string of such findings in a nation where extraordinarily long hours for some employees has long been the norm.
The man who died was aged 45 and had been under severe pressure as the lead engineer in developing a hybrid version of Toyota's blockbuster Camry line, said Mikio Mizuno, the lawyer representing his wife. The man's identity is being withheld at the request of his family, who continue to live in Toyota City where the company is based.
In the two months up to his death, the man averaged more than 80 hours of overtime per month, according to Mizuno.
.
Caught in the act
BRIT Michelle Palmer was caught romping on top of her lover on a Dubai beach, police said yesterday.
She was arrested after a cop said he saw her having sex on the sand in the Arab emirate.
The officer said she was sitting astride sozzled businessman Vince Acors, who lay on his back, and that she was moving up and down.
Michelle, 36, faces up to six years’ jail in Dubai as she awaits trial for public indecency, drunkenness and assaulting the arresting cop.
And yesterday brunette Michelle was called in by the publishing firm where she had worked for three years in the Muslim state – and sacked (Fired) on the spot.
.
The Borrowing Bandit!
A man accused of checking out hundreds of books and DVDs from libraries around the Denver area and then trying to sell them will be doing all his library borrowing from now on behind bars. Denver prosecutors say 34-year-old Thomas Pilaar was sentenced to 10 years in prison and ordered Tuesday to pay $53,549 in restitution. He pleaded guilty in May.
Of an estimated 1,400 books and DVDs that were taken, about 500 have been recovered. Denver Public Library estimated it had lost $35,000, while Douglas County said it had $11,000 worth of overdue items.
Authorities were tipped off by a woman who recently bought books on Craigslist and noticed the library identification stamps.
.
Ark. suspect leaves behind cell phone for police
Forrest City police weren't able to catch their man after a high-speed chase through town, but the cell phone he left behind gave away his identity.
The chase started just before 11 p.m. Monday after officers received a call about people "fighting in the street with guns," police said. When police arrived, they managed to block one car from getting away. The man in that car spoke briefly with officers before speeding away - and the chase was on.
The man crashed his Toyota Camry into a house and ran away, police said. But as officers searched the car, the man's cell phone rang and the caller asked for the suspect by name.
Officers said a search of the car uncovered a set of scales and two plastic bags, one containing marijuana and the other containing crack cocaine.
Police declined to name the man Tuesday but said they were still searching for him.
.
India beggar coin fortune
When 60-year-old Laxmi Das recently deposited her earnings in an Indian bank in Calcutta, it was a bit more than the usual mundane money transfer.
Ms Das handed over (200lb) of coins - the produce of 44 years of hard begging - enabling her to open an account and qualify for a credit card.
Laxmi began begging near Hatibagan, a busy road junction in northern Calcutta, at the age of 16.
Officials say she could have saved as much as 30,000 rupees ($692).
Posted by The Man at 7/10/2008 No comments: