Not only it looks stupid but also painful

Sex With Hooker Wasn't Fun, It Was Work
A suspended Texas police officer testified Thursday that he was forced to have sex with two prostitutes during an undercover sting operation, saying he was "paid to do it."
Officer Keith Breiner testified in Beaumont, Texas, during a hearing to be reinstated after he was suspended along with another officer after it came to light that the men engaged in sex acts with prostitutes while on the job, the Beaumont Enterprise reports.
"If you are asking if I had an orgasm, yes. It was a job, sir," Breiner reportedly said during testimony. "I didn't have pleasure doing this. I was paid to do it."
Breiner admitted to being manually stimulated as well as engaging in oral and vaginal sex with two women at two spas during an undercover sting operation, the Enterprise said.
Police Chief Frank Coffin contends that Breiner and fellow officer Lt. David Kiker were suspended indefinitely after the sex acts came to light, the paper said. Breiner is trying to stop Beaumont from suspending him, saying that he was asked to have sex as part of the job.
.
Abandoned Baby Kept Alive and Safe by Mother Dog
A newborn baby that was abandoned outdoors by her 14-year-old mother during the Argentina winter was found safe Thursday after being kept alive and warm by a mother dog and her pups.
Farmer Fabio Anze found the naked baby near the city of La Plata, Argentina, lying amongst his dog China’s puppies. The baby was taken to the hospital after Anze called the authorities.
Hospital officials said the baby was only a few hours old when she was found, and was in good health despite several bruises.
Temperatures at night around La Plata, 40 miles south of Buenos Aires, this time of year are cold, but not freezing.
Police have located the 14-year-old mother. It is not known whether she left her baby in the dog's pen or whether the dog found the baby outdoors and carried it in to join her puppies.
.
Man plotted to kill wife, cut off her hand
A man who believed his wife was unfaithful tried to hire a hit man to kill her and chop off her hand with a samurai sword so he could get back a $27,000 diamond wedding ring, police said Friday.
Rockerfelle Auguste was arrested Thursday at his Manhattan office on charges of conspiracy to commit murder and criminal possession of a weapon.
Police say the 35-year-old Auguste, a designer at an architectural firm, suspected his wife was cheating. They say he gave the undercover officer a samurai sword and a $500 deposit.
At a court hearing Friday, prosecutors said Auguste tried to hire a killer because he was angry about spending thousands of dollars on a wedding celebration that never happened. The two were civilly married.
The 26-year-old woman moved out of their Brooklyn home a few months ago after filing a domestic abuse report.
.
Pigeon in custody for smuggling drugs to Bosnian prisoners
Bosnian police have impounded a pigeon after discovering prisoners used it to smuggle drugs into one of the country's highest security jails. "The guards suspected the animal might be involved in drug smuggling once they noticed four prisoners visibly intoxicated shortly after the pigeon landed on a prison window," Zenica prison official Josip Pojavnik said. All four inmates had tested positive for heroin, said Pojavnik, adding disciplinary proceedings had been launched against the inmates.
The drugs, he added, had probably been stuffed into tiny bags attached to the legs of the carrier pigeon, which one of the prisoners had previously been allowed to keep as a pet in his cell.
The incident had prompted the prison administration to consider closing down a prisoner pigeon-breeding project established in a ward of the jail as part of a rehabilitation program, he added.
A similar case of carrier pigeons being used by prisoners was reportedly uncovered earlier this year at a jail in Brazil, where the birds were being used to deliver drugs and even mobile telephones.
Posted by The Man at 8/23/2008 No comments: 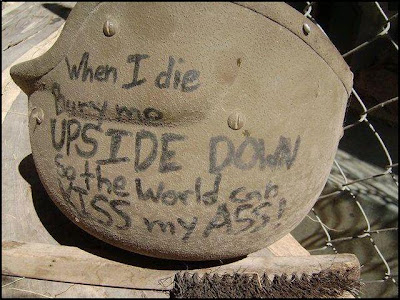 There is always time for McDonalds 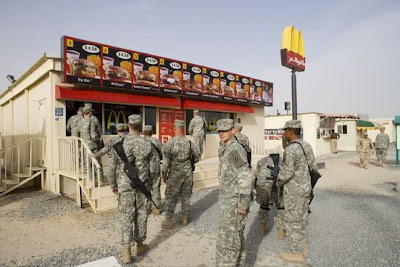 LET ME SEE IT 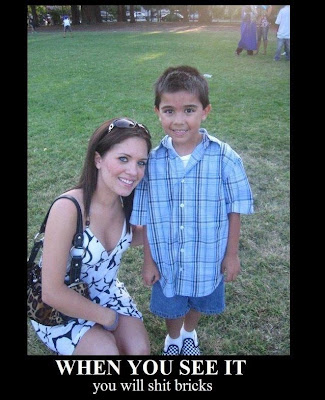 A thief was caught robbing a house 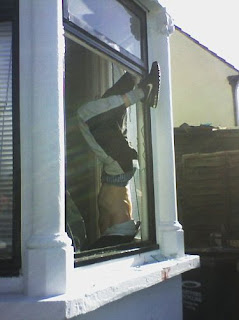 "This is the amazing scene of a burglar hanging upside down that greeted home owner Paul Ives when he returned home from work. Thief John Pearce had got his foot caught after smashing his way through the glass and was left hanging upside down for more than an hour, unable to move. Eventually, he was freed when Mr Ives called police and paramedics who managed to release Pearce’s shoe and hauled him down."
.
Caught In The Act Video
Posted by The Man at 8/23/2008 No comments:

A Pair of Pythons 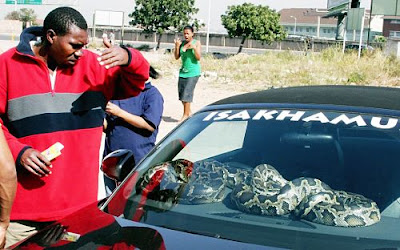