My father was often away on lengthy tours of duty, leaving my mother to manage five kids by herself. While he was away we used to sneak into their room to sleep. So before shipping out one time, Dad reminded us to respect Mom's space and sleep in our own rooms. Upon his return, as he disembarked the plane with the rest of his unit, my brother ran up to him, jumped into his arms and loudly announced, "Dad, you're going to be so happy. While you were gone this time nobody slept with Mom."
Posted by The Man at 2/24/2008 No comments: 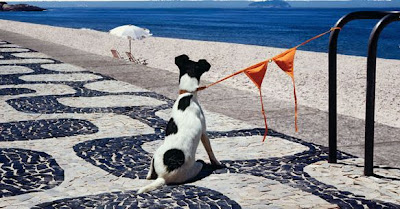 Maybe It's A Trap

Update photo for story below. 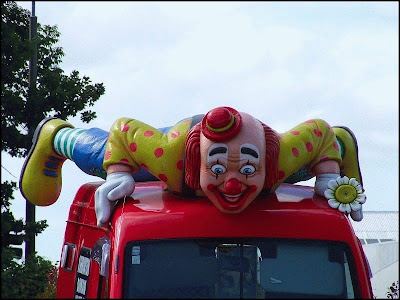 Woman Fighting With Boyfriend Drives With Him Clinging to Car Roof
Sunday, February 24, 2008 HAVERSTRAW, N.Y. — A man fighting with his girlfriend clung to a car roof and punched her through the window as she drove more than a mile on a busy road, hitting several other cars, police said.
Both were hurt in the brawl Saturday and were arrested, police Sgt. Manfredo Figueroa said.
The man, William Kremer, apparently jumped onto the car and held on as girlfriend Stacey Sperrazza wove along Route 202 with the car's air bag inflated, police said. She eventually stopped the car and hit him with it, police said.
Sperrazza, 37, of Stony Point, was arrested on a felony charge of reckless endangerment. Kremer, 42, of Haverstraw, was arrested on a misdemeanor assault charge.
.
Saudi Men Arrested for 'Flirting'
Prosecutors in Saudi Arabia have begun investigating 57 young men who were arrested on Thursday for flirting with girls at shopping centers in Mecca. The men are accused of wearing indecent clothes, playing loud music and dancing in order to attract the attention of girls.
.

Philippine bride sues groom who left her at the altar.
A Filipina bride is suing her former fiancé after he ran off with another woman before the wedding ceremony had even finished, the Philippine Star newspaper reported Saturday.
The couple had nearly finished saying their vows when a woman appeared at the back of the church and shouted that the wedding should stop, the newspaper said.
The groom -- who had been about to say "I do" -- hesitated before walking to the woman and hugging her, and the pair fled in a taxi, the newspaper added.
The bride says she suffered "irreparable damages" and has not slept well after the incident in December. She is reportedly seeking 549,630 pesos (13,520 dollars) in damages.
.
Calif. Prison Strip Searches Reviewed
SACRAMENTO, Calif. (AP) - California corrections officials on Friday said they are investigating whether guards at a Southern California prison improperly watched video of
female inmates being strip-searched. The investigation arose after the husband of an inmate, during a visit earlier this month, noticed about six male and female guards gathered around a video monitor in the reception area for prison visitors.
Posted by The Man at 2/24/2008 No comments: