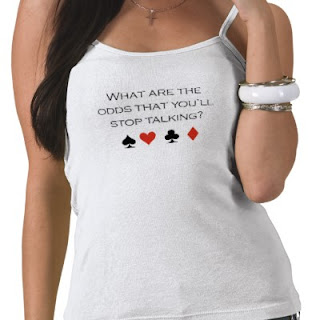 Four card players were astonished to pick up identical straight run hands in a bizarre fluke calculated as a 61 billion-to-one chance.
Lady luck was definitely at the table when the increasingly amazed foursome started to sort through their 13-card hands.
Each found he had a run of cards from an ace through to the 10 and completed with a jack, queen, king flourish.
The freak outcome happened last week as Owen Williams, Meirion Hopkins, Ieuan Griffiths and Mike Harwood sat down to play a game called Crush at Brynamman Industrial Club near Ammanford, South Wales.
They were so intrigued by the outlandish outcome they called Cardiff School of Mathematics to find out what the odds were.
Lecturer Rhyd Lewis astonished them further by calculating the odds at a breathtaking 61,204,166,001 to one.
.
Posted by The Man at 1/24/2010 No comments:

One scoop at a time

Trouble in the golf world but isn't about Tiger Woods. 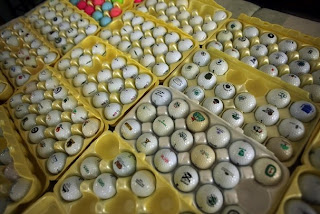 It's about William and Dorothy Abbott who built a home in North Naples in the mid '80s. It was nothing but “scraggly farm land” at the time. Then in 1993 developers built the Stonebridge golf course next to their home.
Now golf balls rain down on their home every day.
Most land with a soft thud in the well-kept lawn. But some crash through their living room windows, smash garden ornaments crack the concrete roof tiles and rip holes through their lanai screens, reports.
Their home and yard get pelted with up to 200 golf balls a month. In letters dating to 1995, the golf course has repeatedly claimed no responsibility for errant shots by its golfers. Stonebridge plans to redesign its course, which may help the matter.
PICTURES
.
Posted by The Man at 1/24/2010 No comments:

Labels: In The News, Pictures, Sports

Brits think bacon comes from sheep
A survey of British youngsters suggests 26 percent of the country's under-16 population erroneously believe bacon comes from sheep.
The survey of 800 children and adults, conducted for the Home Grown Cereals Authority and the National Farmers' Union, also suggests 29 percent of youngsters believe oats grow on trees and 17 percent of both children and adults are under the false impression that eggs are a necessary ingredient in bread.
"Everyone should know where primary foods like cereals are grown and the role they play as part of a healthy, balanced diet," said Peter Kendall, president of the National Farmers' Union. "More than half the food consumed in the U.K. is produced on British farms, yet the public, and especially young people, are unable to make this connection."
.
Man Arrested at Wal-Mart for Urinating on Steaks
An Ohio man is in jail after police arrested him on charges of urinating on a meat counter at a Wal-Mart store.
Robert T. Jenkins, 21, of Canton, Ohio, walked up to the meat counter and began urinating on the steaks. The disorderly conduct destroyed more than $600 dollars in meat.
Jenkins was charged with felony vandalism and disorderly conduct.
.
It's just a powdered donut, turns out to be cocaine
When officers pulled a 21-year-old Knoxville woman over on Airport Highway in Alcoa early Thursday, she allegedly told officers it was a powdered donut she was eating when they came to the window.
But a field test on the substance indicated the white powder she put in her mouth was not from a sugary pastry, but, rather, was cocaine, according to an Alcoa police report. Whitney Alison Holte was arrested and charged with possession of a Schedule II substance with intent to sell or deliver and three attachments for contempt; she was also cited with driving on a suspended driver's license, driving without proof of insurance, failure to maintain her lane of traffic and possession of drug paraphernalia.
.
Candy Leads to Arrest
Two New York men were jailed and held for almost a week after two police officers mistook a bag of candy for crack, authorities said.
"Sweet happens," a police source as say unapologetically of the mistake.
After Jose Pena and Cesar Rodriguez had gone into a liquor/convenience store to buy their usual coconut candy, two cops waiting outside asked to search their minivan.
"I said 'Go search.' I even opened the door," Rodriguez said.
One officer rummaged around found a "Hello Kitty" sandwich bag with a crumbled substance inside, shouted "Bingo!"
The two plumbers were handcuffed and taken into custody even though the cops could have realized their mistake on the spot, the men's lawyer told the Post.
"That's the reason why they have a field-test kit," Neal Wallerstein said.
Pena was released after three days in custody and Rodriguez after five, the Post said.
"I didn't know having candy was a crime," Rodriguez said.
.
Posted by The Man at 1/24/2010 No comments:

My New Pink Button is a genital cosmetic dye that restores the "pink" back to a woman's genitals. The labia dye lasts from 48-72 hours.
.
Posted by The Man at 1/24/2010 No comments:

Beetle Brooch and US Customs

Anything to declare, ma'am? … Yes, this live, wriggling jewel-encrusted pet beetle brooch … Sorry ma'am, you don't have the right paperwork, you need a PPQ form 526
It was an unlikely fashion accessory but the arrival of a jewel-encrusted beetle at a US border post certainly bugged customs officers.
A woman crossing from Mexico at Brownsville, Texas, declared the live insect decorated with blue and gold as she drove up to enter the state but she did not have the right paperwork.
Pest control measures meant officers promptly confiscated the item worn as a brooch on the traveler’s sweater and sent it for further inspection. The beetle was attached to the woman's clothing by a gold chain and safety pin.
Animal rights campaigners were less forgiving, reported the south Texan newspaper The Monitor.. Jaime Zalac, for People for the Ethical Treatment of Animals, said: "Beetles may not be as cute and cuddly as puppies and kittens, but they have the same capacity to feel pain and suffer. It's ironic. We spend hours each week helping kind people find humane ways to relocate lost insects such as ants, bees and roaches that wander into their homes. People feel so good about not hurting them, while this woman paid someone to mutilate them."
.
Live Beetle Brooches
.
Posted by The Man at 1/24/2010 1 comment:

The men of Symphony Brass