My City is Going Under

The north end of the INRR bridge
In the middle of this picture is all you can see what's left of this bridge.
It collapse yesterday around 2:30 in the afternoon 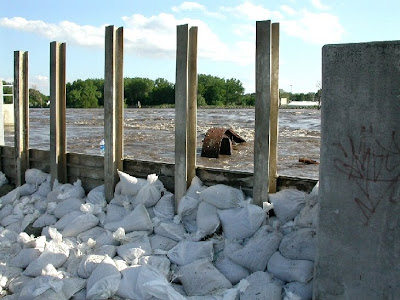 TRAVEL INTO DOWNTOWN WATERLOO IS STRONGLY DISCOURAGED.
Waterloo Mayor Timothy Hurley is strongly discouraging travel into downtown Waterloo due to the rising floodwaters. Access to the downtown area is very limited. All non-essential persons should stay out of the downtown Waterloo area until further notice. Mayor Hurley is asking for everyone's cooperation as we continue to work through this incident.
.
The City of Waterloo has an IMMEDIATE NEED for volunteers to assist with sandbagging
We wish to thank those who have been volunteering. Additional volunteers are needed immediately. Volunteers should report to the Street Department at 1601 Blackhawk Street.

Two weeks ago we went through a EF-5 Tornado = Wind speed >200 mph
Story Here
.
BlackCrypt said...
Man, I feel for you. I have friends and family who live in Indiana, and they are going through the same thing. There are towns that are completely gone there. My thoughts go out to all that are involved in the flooding in the midwest.
Posted by The Man at 6/11/2008 2 comments:

Railway Crossing in Bangalore India.
The Alarm Sounds, The Barriers Come Down.
Then the idiot’s begins their venture across the tracks.

Men You Now Can Have The Perfect Woman

That is if you have $$$$$$
.
A Japanese robotics website claims they perfected a perfect woman
.
However, sceptics believe it is a scam
Posted by The Man at 6/11/2008 No comments:

Girl gives her Brother a Surprise

The clip, which was filmed by the woman’s boyfriend and posted on the internet, has been viewed two million times.
Titled "Why every guy should buy their girlfriend a Wii Fit", it shows 25-year-old Lauren Bernat doing fast hula hoop motions dressed only in her panties and a T-shirt.
.
Watch the Original Clip 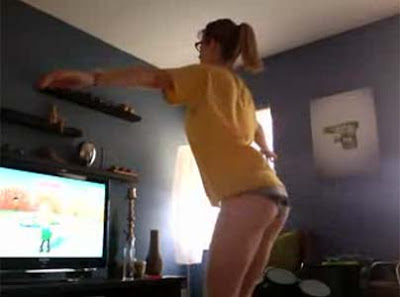 Couples seek sex in space
Virgin Galactic, a New Mexico space tourism company, said it has received several requests from couples seeking to be the first to have sex in space.
Will Whitehorn, president of the company, said the approach of Virgin's first planned space tourism flight, which is expected to take place in 2009, has led to many curious couples asking the company about sex in sub-orbital zero gravity.
.
Man uses pepper spray to ward off squirrel
New York officials said they were called to a Rochester neighborhood after a man tried getting a squirrel to leave his home by using pepper spray.
Emergency officials arrived at the home Sunday afternoon to rinse out the eyes of five people who were present when the pepper spray was released, said Scott Williams, deputy fire chief of the Rochester Fire Department.
Firefighters tuned on fans in the home to get rid of the lingering pepper spray, the Rochester (N.Y.) Democrat & Chronicle reported.
"When the fire department went in and opened up all of the windows, the squirrel decided to leave. The squirrel figured he was done there."
.
Irate customer denies kidnap of cable guy
A retiree in Tennessee has been charged with kidnapping a cable technician because he was upset about the man's failure to fix his TV problem.
"After you pay a monthly fee you expect some service," Weatherly said after a hearing Monday. "But why would I kidnap the cable guy? I was polite to him and told him to leave. The TV was under warranty."
The technician, who no longer works for Comcast, said that Weatherly, during a repair visit in March 2007, dead bolted the front door of his home in Donelson, near Nashville, refused to allow him to leave and set his dog on him. Weatherly says that after the technician disconnected the surround-sound to his TV he ordered him out of the house.
Weatherly now has a satellite dish.
.
Posted by The Man at 6/11/2008 No comments: