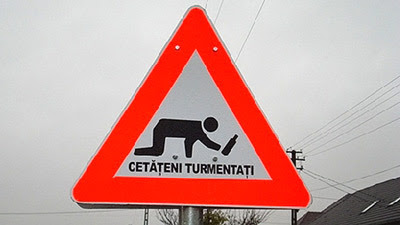 Officials in Pecica, a village town about 13 miles from the Hungarian border in the country’s west, ordered the bright red signs, complete with the phrase “Attention - Drunks”.
The 10 road signs, which also show a person crawling on their knees while clutching a glass in one hand, were erected in popular nightspot areas close to the city's bars and restaurants.
.
Posted by The Man at 3/11/2010 1 comment:

Mississippi school cancels prom to avoid lesbian student bringing a date
A school in America has decided to cancel its prom dance after a lesbian student demanded she be able to attend with her girlfriend and wear a tuxedo.
.
Worker's head almost crushed in freak accident
A worker’s head was nearly crushed at his workplace when it got stuck between the rear axle of a truck and a jack, police said.
The worker, 19, from Fürstenfeld district, was standing in a pit below a truck on which he was working when the incident occurred.
The man’s screams alerted colleagues who managed to free his head from the deadly embrace.
.
A drunk went into cop shop with a kilo of explosives
A drunken man carrying 1.1 kilos of explosives showed up at a police station in Saalfelden, Salzburg, on Tuesday night demanding to speak to officers and ‘spill the beans’.
The 25-year-old told startled cops he would "name names" and tell them where more of the explosive, an industrial product called "Gelatine-Donarit," was stashed if they revoked a small fine recently given to him for violation of an administrative regulation.
Following the man’s confession police and weapons experts raided the apartment of a 37-year-old man where they found 20 kilos of the explosive.
Police ruled out the likelihood the two were planning an act of terrorism saying they had probably stolen the explosive to sell it and make some money.
.
Women donate a ton of ‘used bras’ for poor women
Hertsmere Borough Council collected 17,913 bras weighing just over one ton in special pink recycling bins, which can now be reused by women in poorer countries,
She said: ''This really is great news. It's brilliant that this scheme has been so well supported, thank you to everyone who has taken part.
''By recycling your bras not only will less waste be sent to landfill but women in poorer countries will benefit and you will be helping to fund research into breast cancer.''
.
Posted by The Man at 3/11/2010 No comments: 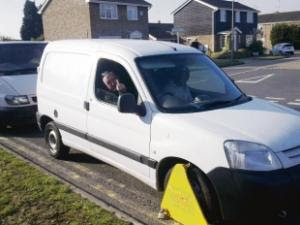 For many motorists, these pictures of a prolific wheel-clamping firm’s van being clamped for having no road tax will be regarded as poetic justice.
An employee of Southend-based LBS Enforcement, which has demanded substantial payment from hapless motorists across the region, got a taste of their own medicine.
Southend Council spotted the car and swooped. The vehicle was clamped, towed away and impounded.
As it happened, an LBS tow truck arrived on the scene...seemingly just too late to save its own vehicle. 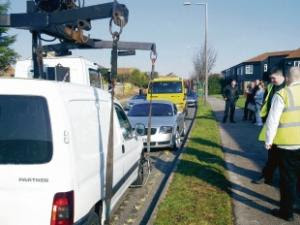