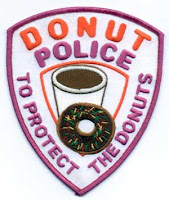 An Indiana State Police trooper is being credited with saving a Lafayette donut shop, after noticing it on fire early this morning as he was passing.
According to a release from Indiana State Police, Trooper Ryan Winters noticed flames at the Krispy Kreme donut shop at 4030 State Road around 1:49 am.
Winters notified dispatchers, then busted out the front glass door to see if anyone was inside. The business was closed and nobody was inside. Winters grabbed a fire extinguisher and put out the fire that had started in the kitchen area.
Posted by The Man at 11/24/2008 No comments: