Tampa man jailed on charge of wearing illegal clown mask
An 18-year-old Tampa man was charged with wearing a clown mask on a public road.
Deputies say Matthew David Lopez, was seen with two other people walking.
What caught a deputy's attention was Lopez's masked face with a bright red-and-orange wig, according to an arrest affidavit.
The deputy followed the group in an unmarked car as the group walked west through a slightly wooded path behind several business offices.
Lopez was taken to the Hillsborough County Jail on charges of wearing a mask or hood on a public road after the age of 16 and resisting arrest without violence.
Hillsborough County Sheriff's Office spokeswoman Debbie Carter said any disguise in public is illegal. Even on Halloween, adults aren't allowed to enter any businesses or stores with their faces covered.
.
Man uses backhoe to crush dozens of cars
An angry husband is facing charges after using a backhoe to smash dozens of cars owned by a company that stages demolition derbies.
"He believed somebody at that business was having an affair with his wife," Wayne County Sheriff's Chief Deputy Robert Hetzke said. "He and his wife were going through some marital issues."
This time police say he took out his anger on 30 demolition derby cars.
"The demolition derby part of it was different," Hetzke said. "The number of vehicles was definitely different than the normal domestic dispute."
The damage here is pretty impressive.
Police say Fagner took a backhoe and smashed down most of the roofs on most of the cars.
On one he went a little bit further when he took the backhoe and flipped the car altogether.
Fagner is accused of causing about $40,000 in damage.
.
Posted by The Man at 2/26/2010 No comments:

These are photos taken at the emergency room in Mason City, Iowa. Despite severe frostbite to his feet, Patrick Uzalac said, police and jailers refused to give him medical care.
After locking himself out of his apartment in the pre-dawn hours of a bitter January day, Patrick Uzalac started tossing snowballs at his neighbors' windows for help.
Somebody called the cops.
The New Brighton man's lawsuit says police and jailers refused him medical care for severe frostbite for 42 hours. 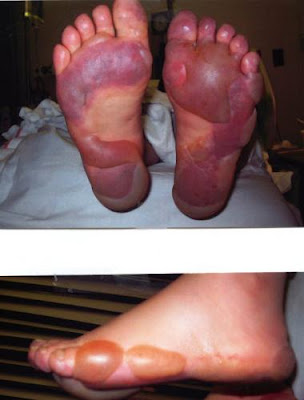 WARNING
Video showing a woman throwing her baby down on concrete
.
.
Posted by The Man at 2/26/2010 No comments: