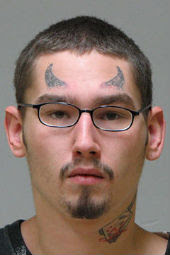 .
.
Sometimes, it's not hard to pick your suspect out of the police lineup. Police arrested Jason James Hughes, who has a tattoo of horns on his forehead and a bloody cleaver on his neck, for allegedly having sexual contact with a 13-year-old at his Cedar Springs, Mich., apartment last month.
.
.
Posted by The Man at 1/11/2010 3 comments:

Labels: In The News, Tattoo, What a "Dumb Ass"

'Fat' Murphy is a Hermaphrodite 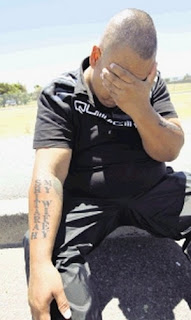 But the man who was banished from a crime-ridden suburb on the Cape Flats by furious residents protesting against alleged drug dealers has now been unmasked - as a hermaphrodite named Hilary.
Police and the underworld were shocked this week when Fadwaan "Fat" Murphy, 37, stood up in court to face charges of possession of stolen property, and declared under oath that he was born with both male and female sexual organs.
Murphy's "true" gender was discovered when his strap-on penis fell off while he was being searched during a raid at his Kuils River home.
I had a vagina that could not be penetrated. But I also had male testes. But I always knew I was really a man and that was what I wanted to be," he told the court. A startled public gallery had to be told by court orderlies to keep quiet, as he dropped the bombshell.
Murphy applied for bail after being charged with possession of stolen property and corruption - police claimed he offered a member of the force R9 100 not to search him during the raid.
Murphy's mother, Faiza Allie, 59, said that she tried to bring him up as a girl, but he never wanted to wear dresses.
"He wanted to wear pants, Nevada's, and Grasshopper shoes. Not even on Christmas Day did he put on a dress.
"When he was at school he used to go out of the house with his school dress on, but around the corner he would take it off and go to school in pants. Just before he got home, he would put the dress on again," she said.
Murphy said: "I would not describe myself as having a sex change - I only had the female parts removed.
.
Posted by The Man at 1/11/2010 No comments: