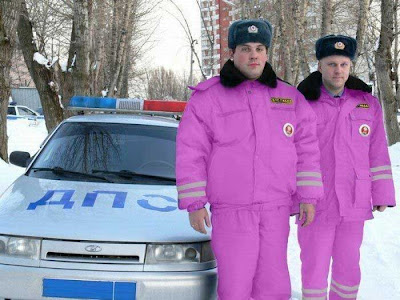 Notice to the Mail Carrier

This picture was taken in Melbourne Australia 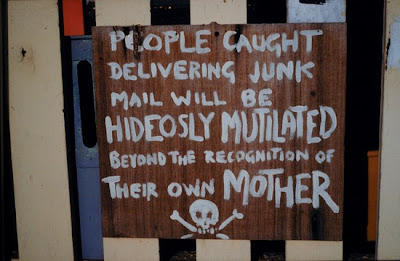 Robber's see-through disguise
A robber wearing a transparent plastic bag over his head has held up a service station on the Gold Coast
Police said the man entered the BP service station at Labrador about 3:53pm yesterday wearing the plastic bag, and wielding a large carving knife.
He approached the male attendant and demanded cash.
In response, the worker placed the money tray from the register on the counter and the robber helped himself.
He was last seen running through the Sharks Football Club parking lot on Olsen Avenue, heading east.
He is described as about 170cm tall in his mid-20s and wearing three-quarter length denim shorts, a white t-shirt and a sky blue baseball cap.
Police will today examine CCTV footage of the incident in the hope of identifying the culprit.
.
Man smashes TV at Target with baseball bat
A man who told Target store employees he "wanted to get into trouble" was in jail after police said he smashed a big-screen TV with a baseball bat.
Police said the man picked up the bat off a shelf at a St. Cloud, Minn. Target, went into the electronics department and smashed a 50-inch plasma television.
The vandalism happened about 12:30 p.m. Sunday. The TV was valued at around $1,230.
The man was booked into the Benton County Jail.
.
Wife allegedly rigs saw to shock husband
In court papers an Olympia Wash. woman, angry that her husband left her, tampered with his power tools so that he received a powerful electric shock.
Carolyn Paulsen-Riat was booked Friday into the Thurston County Jail for investigation of third-degree assault, domestic violence, and second-degree malicious mischief. A judge released the 33-year-old woman on her own recognizance.
The Olympian newspaper reported that court documents said that on Jan. 1, the man was using a 220-volt table saw when he received the shock, knocking him to the ground. Thurston County sheriff's deputies said the man did not need to go to a hospital.
In the documents, deputies said the woman told them she had reversed the wires on his power tools because she was angry he was leaving.
.
Bookie refuses to pay out $11 million on snow bet
Bookmaker Ladbrokes is refusing to pay out more than 7 million pounds ($11 million) to a man who gambled on a white Christmas across the UK, as the bet was accepted by mistake.
Cliff Bryant, 52, had placed two 5-pound accumulator bets that snow would fall on 24 towns and cities across the north of England on Christmas Day.
"We have apologized to the customer for any confusion and for mistakenly accepting an accumulator bet when our own rules state that only single bets are available on a market of this nature," said a Ladbrokes spokesman.
"We are happy to void the bets and to pay the customer his winnings on the relevant singles." They however amount to just 31.78 pounds, rather than the 7.1 million Bryant was expecting.
.
Posted by The Man at 1/12/2010 No comments: