With a name like that what else would you do 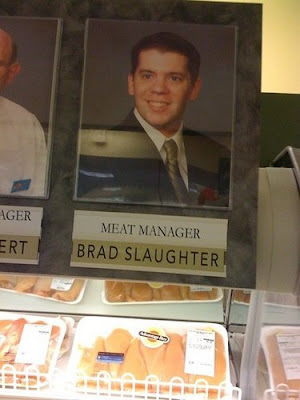 Kitten with a Very Strange Meow

Men and their toys

The 7ft. Burglar that Ran But Couldn’t Hide 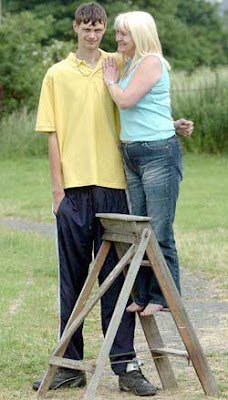 .
At 7ft 4in tall, Christopher Lister doesn’t have the best of physiques to be a successful burglar.
Yet the instantly recognisable 21-year-old decided to burgle a house in daylight.
His intended victims lived just yards from his home and everyone knows the ungainly human skyscraper nicknamed "Stretch".
As he and two pals attempted to load a £1,800 plasma TV into their getaway van he was easily spotted.
The van got stuck, forcing them to run off empty-handed.
Given Lister’s distinctive description, police arrested him moments later and he is now Britain’s tallest prisoner after being jailed for 11 months.
Lister talked on TV about his height two years ago in a documentary about Britain’s tallest teens
Posted by The Man at 6/12/2009 2 comments:

Cop Runs Over Woman Sunbathing
A rookie police officer from Jacksonville Beach, Florida was suspended for seven days for running over a woman sunbathing on a north Florida beach.
An internal affairs investigation released Wednesday by the Jacksonville Beach Police Department concluded that Officer Lewis Keller was negligent and at fault for the May 1 accident.
Keller was making a U-turn in his sport utility vehicle when he rolled over 41-year-old Anne Marie Giffin of Jacksonville. Investigators said Keller and another man lifted the SUV off Giffin while other people pulled her out.
Giffin was treated for a broken pelvis and ribs, along with head and spinal injuries.
Keller told investigators he didn't see Giffin lying in the sand, but Chief Bruce Thomason concluded that Keller wasn't driving safely
.
Job-seekers try new tactics to get employers' eye
Job-seekers are using unusual gimmicks to grab the attention of potential employers, such as in one case sending a shoe along with a resume to get a "foot in the door," said a survey released on Wednesday.
Almost a fifth of hiring managers report seeing more unconventional tactics this year, compared with 12 percent who said so last year.
Faced with the highest unemployment in 25 years, candidates are trying a variety of tricks, including:
* handing out resumes at stop lights
* washing cars in a company parking lot
* staging a sit-in in a company lobby to demand a meeting with a director
* sending a cake designed as a business card with the candidate's picture
* handing out personalized coffee cups
* going to the same barber as the company chairman to have the barber speak on his behalf.
.
Escaped prisoner found hiding inside prison
A prisoner thought to have escaped from Holloway jail last week has been found hiding inside the prison five days after she disappeared.
Aishatu Ishaku, 35, had been hiding inside the roof space of the prison's education center.
Prison officers mounted a major search for Ishaku after she went missing following a roll call last Friday.
Police forces were alerted, a helicopter was scrambled and details of the Russian-born Nigerian woman were circulated to ports and airports.
But today the Ministry of Justice admitted that Ishaku had been found INSIDE the jail after an extensive search of the premises.
Prison insiders have told the Standard that she had been found hiding inside the roof space of the jail's education center.
She had spent five days in the hiding spot after taking supplies with her including food and water.
.
Violating ex-girlfriend with sex toy
A ex-lover tied up his former girlfriend before raping her with a large sex toy "to scare her into locking her doors at night", the Supreme Court has heard.
The man, who cannot be named for legal reasons, is also accused of pouring beer over his victim before apologizing for his conduct and driving her to work.
The man today pleaded not guilty to two counts of rape, two counts of attempted rape and one count of aggravated serious criminal trespass.
.
Top 30 Failed Technology Predictions
This is a very interesting list showing how vision-less, stupid people deemed some of the world's top inventions would never be, that have come to be!
.
"The horse is here to stay but the automobile is only a novelty – a fad." — The president of the Michigan Savings Bank advising Henry Ford’s lawyer, Horace Rackham, not to invest in the Ford Motor Co., 1903
.
"This ‘telephone’ has too many shortcomings to be seriously considered as a means of communication. The device is inherently of no value to us." — A memo at Western Union, 1878 (or 1876)
.
"Television won’t be able to hold on to any market it captures after the first six months. People will soon get tired of staring at a plywood box every night." — Darryl Zanuck, movie producer, 20th Century Fox, 1946."
.
Rail travel at high speed is not possible because passengers, unable to breathe, would die of asphyxia." — Dr Dionysys Larder (1793-1859), professor of Natural Philosophy and Astronomy, University College London.
.
Posted by The Man at 6/12/2009 No comments: 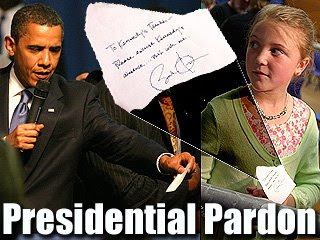 Ten-year-old Kennedy Corpus has a rock-solid excuse for missing the last day of school:
.
Her father, John Corpus of Green Bay, stood to ask Obama about health care during the president's town hall-style meeting at Southwest High School on Thursday. He told Obama that his daughter was missing school to attend the event and that he hoped she didn't get in trouble.
"Do you need me to write a note?" Obama asked. The crowd laughed, but the president was serious. On a piece of paper, he wrote: "To Kennedy's teacher: Please excuse Kennedy's absence. She's with me. Barack Obama." He stepped off the stage to hand-deliver the note.
.
4th grader playing hooky gets an excuse note from President Obama
.
.
Posted by The Man at 6/12/2009 No comments:

I guess he is Ram Tough.

Encased in Cement: After cutting the barrel away a man's body was found stuffed in a barrel with cement. Only known fact about the man was that he was a drug dealer. It's possible that the competition murdered him in this vile fashion.
. 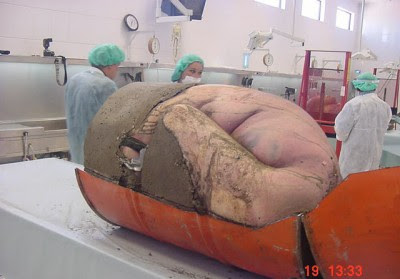 Dashcam Video of Grandma showing exactly what happened between a deputy and a 72-year-old woman, before she was tasered earlier this month.
.
.
Tuesday, June 2, 2009
Grandmother Tasered at Traffic Stop
.
Posted by The Man at 6/12/2009 No comments: