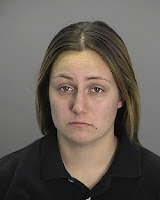 .
.
It didn't work.
.
Sara Lou Kenny needed some clean urine to pass a drug test so, authorities say, she tried to smuggle the urine from her friend's 4-year-old son past a probation officer and pass it off as her own.
.
Posted by The Man at 3/02/2010 No comments:

Fruity Pebbles laced with Pot
Police say a fifth grader brought special Fruity Pebbles treats to school on Monday: they contained marijuana.
The student who brought the treats to school knew they contained pot, police say. The student had obtained the treats from her adult sister.
The older sister told police she received the pot treats from a medical marijuana dispensary. Pittsburg police are investigating whether the sister had a legitimate card to obtain the pot.
.
Wedding elephant destroys 20 limos
An elephant hired for a Hindu wedding in India caused more than £200,000 damage after trying to reach an in-heat female.
The turned-on tusker trampled 20 limos trying to reach the female in a nearby sugar cane field in the Indian capital New Delhi.
He also then mounted and attempted to mate with a truck, and smashed through a shopping mall in the 15-hour New Delhi rampage.
His adventure was finally brought to an end when wildlife experts managed to bring him down with a tranquillizer gun.
‘It is a very powerful urge,’ said one expert.
VIDEO
.
Graffiti Vandal Sought
A vandal has caused thousands of pounds worth of damage by spray painting more than 50 "offensive" images of male genitals in Sussex.
.
NASA Scientist Says
Chilean quake may have shifted the earth’s axis,
.
Man electrocuted by urinating on power line
.
Posted by The Man at 3/02/2010 1 comment: 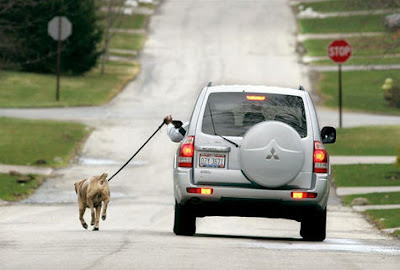 A County Durham man Paul Railton, 23, of Annfield Plain caught walking his lurcher through the window of his moving car has lost his license.
Railton, admitted breaching two counts of the Road Traffic Act, at Consett Magistrates Court on Monday. In mitigation, his solicitor, Paul Donoghue, said: "He accepts it was a silly thing to do, just out of pure laziness."
.
Posted by The Man at 3/02/2010 4 comments: 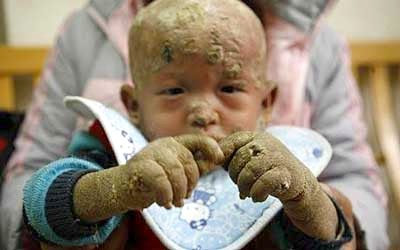 This 14-month-old tot born without pores in his skin has baffled medics by developing fish scales.
Doctors believe little Song Sheng, of Jinhu, eastern China, may be suffering from a rare genetic condition that means his body cannot cool itself.
The lad - called fish boy by locals - began developing scales within days of his birth caused by his lack of pores.
Doctors say because he can't sweat or lose heat through his skin, it peels away in fish-like scales.
Instead, his family controls his body temperature by laying him in baths of ice.
.
Posted by The Man at 3/02/2010 No comments: