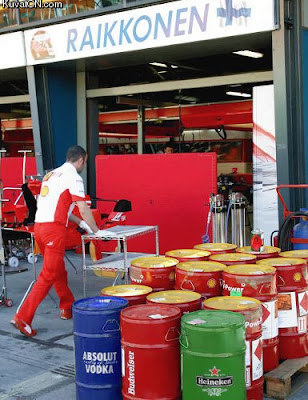 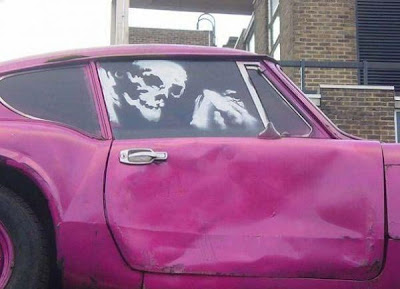 When you have to go will it be worth getting... 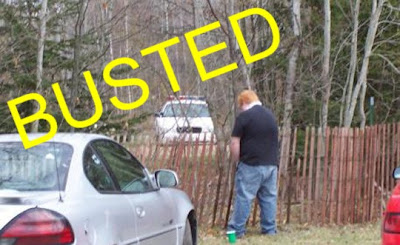 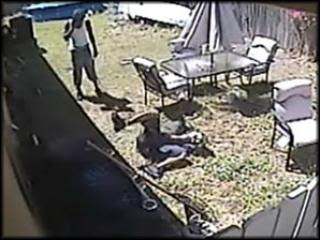 Surveillance video caught one of two burglars in action as he tried to break down a door with his body.
The burglars were trying to break into a home on 36 Ave. North in St. Petersburg Florida by prying open a back door with a crow bar.
When that didn't work, one of the burglars backed up to the fence in the yard, took a "football stance" and ran toward the door. The burglar hit the door, bounced off it, landed on the ground and began rolling around in obvious pain.
After these burglary attempts failed, the suspects threw a brick through a window and entered the home. Once inside, the suspects set off the alarm and then fled. Nothing was taken from the residence.
VIDEO
.
Posted by The Man at 4/02/2009 1 comment:

The only Recognizable Piece 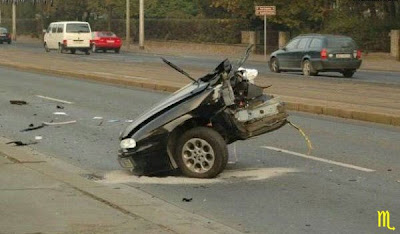 It's all to do with timing 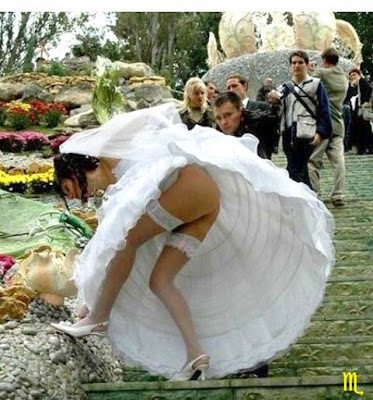 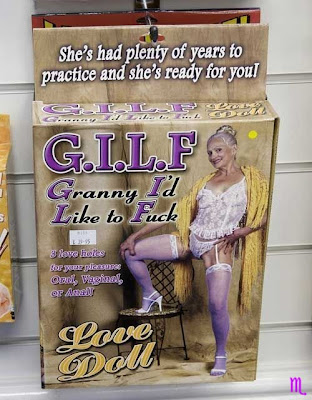 Woman follows G.P.S., gets stuck in snowmobile trail
A motorist in Langlade, Wisconsin was relying on a G.P.S. navigation unit found out the hard way that technology is not always the answer. Sheriff's officials said a woman was driving when the best routing from the G.P.S. sent her onto a road that forked into a snowmobile trail. Several miles down the frozen path she stopped and couldn't turn around in about a foot and a half of snow surrounding the car.
She called 911 at 10:44 a.m.
Deputy Keith Svoboda said it took a while to find her and much longer to get heavy equipment in to free the vehicle. Deputies dropped her at a motel for the night.
Svoboda said the lesson is, "People shouldn't believe everything those things tell you."
.
12-year-old boy, accused of driving car into cruiser
Authorities in Ripley, West Virginia arrested a 12-year-old boy who allegedly drove his mother's car and crashed into a police cruiser on Interstate 77. State Police Sgt. S.E. Wolfe said the boy's mother reported her car missing at 7:54 a.m. Wednesday from her home.
Wolfe says Jackson County sheriff's deputies and a Ripley police officer tried to intercept the car after it was spotted on I-77. The car struck the Ripley cruiser on the driver's side, doing minimal damage, before hitting a guard rail and cable barriers in the median.
A juvenile court petition filed in Jackson County charged the boy with fleeing, joyriding and destruction of property. The boy was released to the custody of his parents on Wednesday afternoon.

Man cries after attempt to rob liquor store fails
Police in Trenton New Jersey said a 19-year-old who tried to rob a liquor store sat down and cried after 76-year-old owner locked him in the store. The man was accused of trying to rob Sykes Liquor Store in Trenton Monday night. Police said the owner, who was behind the counter, triggered the lock after the man grabbed a bottle of Hennessy cognac and bolted for the door.
The man then allegedly pulled out a handgun and demanded to be released. But the owner said he saw that the gun was a fake, refused to unlock the door and called police.
Police said the suspect threw away the gun, slumped to the floor and was crying when officers arrived to arrest him.
.
Teen arrested for handing in mobile phone to police
But they arrested me for theft by finding – shocking.
I want people to be aware of what happened. The Southport police are harsh.
“I thought I was doing the right thing and had it thrown back in my face. I would not go to the police in future. I would arrange for it to be collected by the last caller.
“All I was doing was the honest thing. It was a shocking experience.”
His father Vinnie, 37, said: “I’m disgusted and angry. It should never have happened. Paul’s mother and I have brought him up the right way. It’s ridiculous.”
A police spokesman explained the complaint of theft was subsequently withdrawn and Paul was released without charge.
.
One Size Fits All
Police in Allendale, South Carolina, are investigating whether a funeral home fit a 6-foot, 5-inch man into his coffin by severing his legs.
A former Cave Funeral Services employee has alleged since James Hines' death from skin cancer in 2004 that Hines was too tall for his coffin and that the funeral home took extreme measures to make him fit.
Officials exhumed Hines' body Tuesday, Black said, and a fair amount of "undesirable evidence" was found, although he could not comment further.
The coroner's office handed the case over to law enforcement officials for a criminal investigation, he said.
Allendale Police Detective Donnie Hutto said that he could not comment on the condition of the body.
A Cave Funeral Services employee had no comment when asked about the matter.
..
Is this a blond joke or are people really this stupid?
Dispatcher's advice to driver: unlock door
A 911 dispatcher in Orlando, Florida had to tell a caller how to unlock her car on Sunday.
A woman called Kissimmee, Fla., police to say she was locked inside her car at a suburban drug store.
“My car will not start. I’m locked inside my car,” the unidentified woman said.
“Nothing electrical works. And it’s getting very hot in here, and I’m not feeling well.”
The dispatcher asked the woman if she was able to manually pull the lock up on the door.
The woman said she would try, and then, she said, “Yes, I got the door open.
.
”Germans get their first nudist-only hotel
The first nudist-only hotel is set to open in Germany's Black Forest.
Guests will be required to leave their clothes at reception and must be naked at all times when on the premises – "or they will be required to leave".
"We hope to open as soon as possible," Silvia Probsthain, a member of staff at the planned Hotel Rosengarten.
"It will be the first comprehensively nudist hotel in Germany."
The rules state that all guests must put towels on chairs and loungers before using them, that there be no sexual harassment and that all sexual activity in "commonly accessible rooms" is strictly forbidden.
The hotel is being built in Freudenstadt, which translates into "Town of Joys".
.
Posted by The Man at 4/02/2009 No comments: