"You will need to be able to copy the look and style of both author's signatures."
In return, the successful applicants will be paid $25 (£13) for 200 books signed.
CLICK on IMAGE 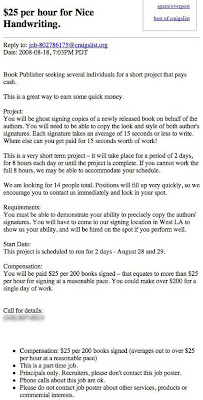 Jennifer Love Hewitt: I Wish I Stayed Nude From Age 12-28
About to turn 30, a newly slimmed down Jennifer Love Hewitt says she wishes she stayed naked from age 12 until 28.
"I so wish I had listened to my mom and grandma when I was 18 and would complain about some little tiny bump or feeling bloated," the "Ghost Whisperer" actress tells Health magazine. "They’d say, 'Sweetheart, appreciate it for all it’s worth because it all changes when you get into your 30s.' I used to scoff and say, 'No, I feel fat today!' Now the joke’s on me. I wish I had been nude from the time I was 12 until I was 28. I looked great!
Now Hewitt says she wants to "tell all young girls to walk around in bikinis all summer — and enjoy it.
.
101 Days of Sex: How One Married Couple 'Just Did It'
When most people train for a marathon, sex toys, pornography and Brazilian waxes are not part of the preparation.
However, Doug and Annie Brown’s marathon was a little different. The Boulder, Colo., couple – who had already been married for 11 years – were about to embark upon a marathon of 101 consecutive days of sex.
In the hilarious, romantic book, "Just Do It – How One Couple Turned Off The TV and Turned On Their Sex Lives For 101 Days (No Excuses!)," Doug Brown highlights how he and his wife set out to accomplish what seemed at times an impossible goal.
.
By the way did you know you’re dead
Mr Gordon was surprised to receive a letter from the council telling him that both he and his wife, Margaret, had died.
The couple received the letter on Wednesday addressed to the executors of Mrs Gordon advising them that a new council tax account had been opened for them.
It went on to ask Peter and Margaret for the exact dates when they had died.
Peter, 46, said: "When I read that my wife was dead I thought, that's funny, she looked fine when she went out of the door this morning!
I just couldn't believe what I was reading. I thought ­ is someone playing a prank on me or something?
"It's a very strange experience to be told you¹re dead."
PICTURE and More
.
Convicted drunk driver's naked joyride with prostitute
James Boppre broke all the rules of house arrest when he went for a late-night drive in his pickup truck last month.He did not observe his curfew. He did not remain sober. He did not keep the peace.And as he crashed into a Kitchener car lot - driving naked while speeding, drunk, high on crack cocaine and next to a naked prostitute - he was not being of good behavior.
The former owner of a landscaping business with a six-figure income, Boppre got drunk, went out in his truck and picked up a prostitute at a Kitchener intersection.
Crown prosecutor Mark Poland said Boppre then parked on East Avenue and smoked crack with the woman before they both took their clothes off.
Boppre sped away, masturbating while watching the woman masturbate, then missed a curve, went over an island and crashed into a parked car at the intersection of Weber Street.
Witnesses saw Boppre grab his clothes and dress while running away, leaving the accident and the naked woman behind.
.
Man Jailed After Taking Photo of Police Van Ignoring 'Wrong Way' Sign
A British man was jailed for five hours after he photographed a cop reversing the wrong way up a one-way street.
After Andrew Carter snapped the cop van, officer Aqil Farooq leaped out, hit the camera to the ground, handcuffed him and bundled him into the back of the vehicle.
Carter, 44 was arrested for supposedly being drunk, resisting arrest and assaulting the officer with the camera.
He was kept in cells before finally being released on police bail at midnight.
"It was very frightening. All I had done was photograph these police officers doing something illegal, but I was the one who ended up being arrested."
Farooq and an unnamed WPC said they were at the fish and chip shop to review CCTV footage of another incident.
Carter was never charged, but complained of wrongful arrest, and Farooq apologized at a disciplinary hearing.
Now Rob Beckley, Deputy Chief Constable of Avon and Somerset Police, has written to Carter saying: "I would like to add my apologies.
Posted by The Man at 8/21/2008 No comments: 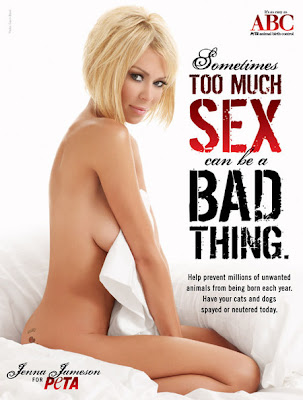 Imagine a phone going off at a wedding reception and the mobile ringtone has the unlikely chant of "condom, condom". Well, if you think people are shocked and disapproving, you've got another think coming! Most people feel there's nothing wrong with the ringtone, as condoms signify smart and responsible behavior, the hallmark of any winner. This 'condom a cappella' ringtone is featured in a new "Jo Samjha Wohi Sikander" campaign produced by the BBC World Service Trust and funded by the Bill & Melinda Gates Foundation. This original ringtone can be downloaded in India by SMSing "CONDOM" to 56887 (download charges apply) or free from anywhere worldwide on the website.
. 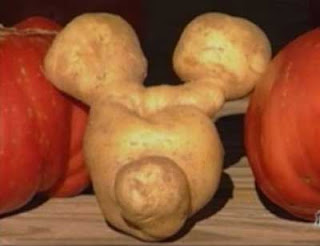 A farmer in Maryland found a mouse in his garden.
When Rick Brown dug up his latest bushel of potatoes,
he found one that looks a lot like Mickey Mouse.
.
NEWS Video
.
Tomorrow's headline:
Disney sues man for infringement of copyright.
.
sg552 said...
I didn't see Mickey Mouse at first.
Instead I saw two kids initiating a hug. Does anyone else see it?
Posted by The Man at 8/21/2008 No comments:

Bat Stands Up Straight After Being Dropped 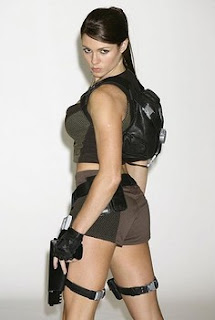 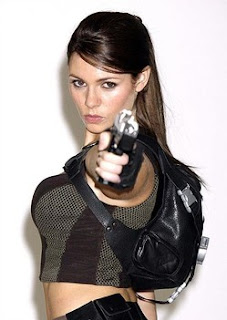 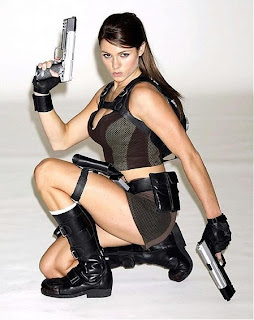 Her name is Alison Carroll...