Is this even possible to do? 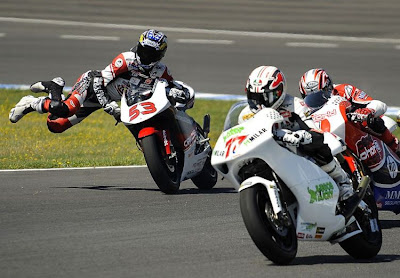 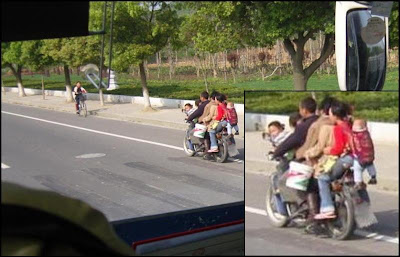 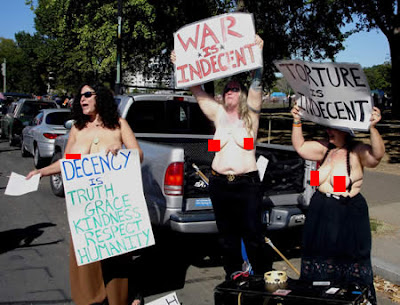 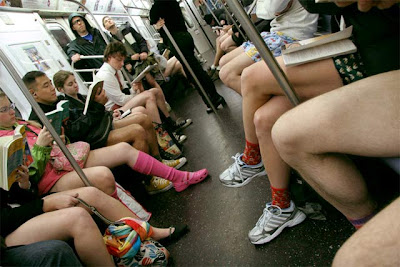 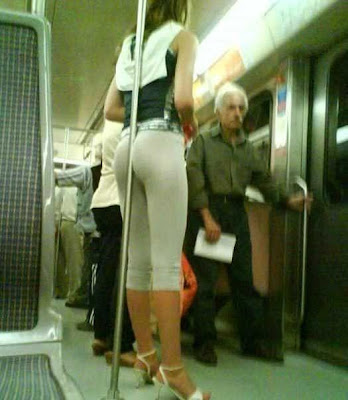 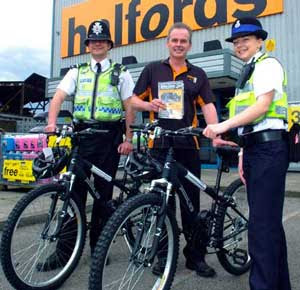 No Can Do
Policeman refused to pose on bicycle because he hasn't passed his cycling proficiency test
Policeman Tony Cobban refused to pose for a picture sitting on his new patrol bike - because he has not passed his cycling proficiency test.Community officer Tony told a photographer who wanted to snap him during the handover of the mountain bike at Halfords that he had been banned by bosses from sitting on the cycle even while it was stationary.
Tony said: "It was a health and safety thing. In this day and age you have to cover all bases. I could get on the bike but I'm not massively proficient." Inspector Nick Emmett said Tony was right not to saddle up in Preston. He added: "Our officers are required to be trained prior to using bikes."
.
Mother's Tip Helps Bust Phoenix-Area Ecstacy Ring
A mother's tip to a police drug force helped put at least 10 dealers behind bars for peddling Ecstasy to teenagers and college students, police said.
The unidentified woman's call to the Maricopa County Methamphetamine Task Force last week helped detectives find the drug ring, which was coordinated and advertised through the social networking Web site MySpace, sheriff's deputy Lt. Steve Bailey said.
At least 10 of the dealers were arrested by Tuesday.
Bailey said the woman looked at her 17-year-old son's Internet activity and realized he was probably purchasing a drug. Investigators said the seller's MySpace profile included a price list and product review.
"She figured out it was Ecstacy, and put that together with how he was acting, lethargic and spacey, and called us," he said.
Detectives said they were able to buy the drug from dealers in Mesa, north Phoenix, Scottsdale, Tempe and Fountain Hills in parks, restaurants and other public places. They said they purchased more than 200 hits in their investigation and that the sellers had a combined client list of nearly 500 area high school and college students.
.
Greek man comes home...to find it stolen
Police in Athens, Greece say robbers near Athens have got away with everything including the kitchen sink, lifting a prefabricated home off its foundation and spiriting it away.
Police say the owner went to visit his 70-square meter vacation home on Monday in the coastal area of Rafina, 25 kilometers east of Athens, and discovered it was missing, along with its contents.
Police said on Wednesday they think the thieves used a crane to load the structure onto a trailer. They have been unable to locate the missing building.
Thousands of Athenians, including Greece's prime minister, Caskets Karamanlis, have vacation properties in Rafina.
.
UAE fines mother over baby death that she didn't do
A court in Dubai has found a woman who lost her unborn child in a traffic accident guilty of manslaughter in what is said to be an unprecedented ruling.
The Lebanese woman, who was nine months pregnant at the time, was also ordered to pay blood money. She said she had not caused the accident.
The judge based the ruling on Islamic law. The court said the rights of unborn babies needed to be protected.
Prosecutors had argued that the verdict should act as a deterrent.
The accident happened in October last year. The court found that she had failed to keep a safe distance from the car ahead of her.
Several cars were involved in the accident, English-language daily The National reports. The paper says the woman's vehicle was hit by the car following hers when she braked suddenly.
The female foetus died after the umbilical cord was cut.
Dubai's traffic court ordered the bereaved mother to pay US$5,450 in blood money and fined her for "unintentional homicide".
Salah Bu Farousha, head of traffic prosecution, said women in the third trimester of pregnancy should avoid driving altogether to protect their own and their fetuses lives.
.
Posted by The Man at 5/07/2009 No comments:

Seismic Disturbance About to Happen CEO of speed camera firm nab for driving at 100mph

'Embarrassed' Tom Riall caught by police flouting 70mph limit
The chief executive of the company that installs the majority of speed cameras on Britain's roads was banned from driving for six months today after admitting driving at more than 100mph.
Tom Riall, the boss of Serco's civil government division, which supplies and installs the Gatso fixed radar cameras to police forces, was traveling at 102.9mph on the A14 in Newmarket, Suffolk, just before 1pm on 4 January, magistrates in Sudbury heard. The speed limit on the dual carriageway is 70mph.
Riall, 49, had two other driving convictions from the last three years, including another speeding offence, the court heard, meaning the six-point penalty imposed by magistrates took him past the 12-point mark, incurring the ban. He was also fined £300.
He asked magistrates not to impose a ban, saying it would cost about £30,000 to employ drivers to take him on business trips during the six months, and that the speeding offence had already caused "some considerable personal embarrassment".
.
Maybe this is what he should have done. 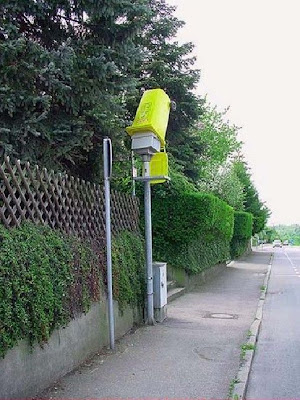 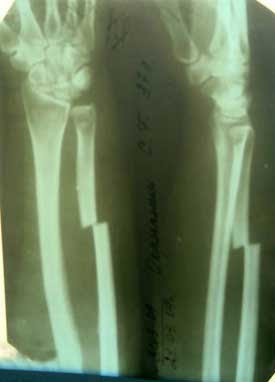 Police are investigating a chimp after it tried to RAPE a female zoo keeper.
Terrified Valentina Kirilova had to fight off the sex-crazed primate when he grabbed her as she gave him a banana at Rostov Zoo in Russia.
Horrified
Valentina said of the attack: "I have spent a lot of time around the primates but I’d never imagined that a lonely chimpanzee could see me as a sex object."
"When I tried to pass a banana to him, the chimpanzee grabbed my hand and pulled me into the cage and tried to rape me," said Valentina.
The lusty ape, called Otello, broke the horrified keeper’s wrist as he pulled her into his cage and began to attack her.
She was only saved when her screams brought other keepers running, who pulled the furious chimp off her. Doctors treated Valentina for shock.
Now police are to quiz zoo staff about how the attack happened.
One keeper said: "It’s a serious matter. If that had been a member of the public we would all be in court by now."
.
Posted by The Man at 5/07/2009 No comments:

Invasion of the Giant Tarantulas Spiders 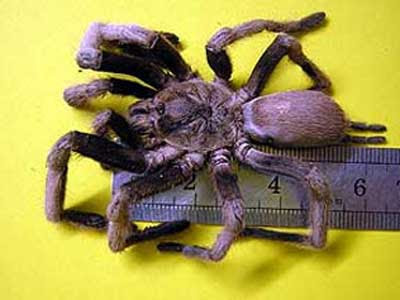 Australia is known around the world for its large and deadly creepy crawlies, but even locals have been shocked by the size of the giant venomous spiders that have invaded an Outback town in Queensland.
Scores of eastern tarantulas, which are known as "bird-eating spiders" and can grow larger than the palm of a man’s hand, have begun crawling out from gardens and venturing into public spaces in Bowen, a coastal town about 700 miles northwest of Brisbane.
Earlier this week locals spotted an Australian tarantula wandering towards a public garden in the center of town where people often sit for lunch. They called in a pest controller, but not before using a can of insect spray to paralyze the spider.
While not deadly like other Australian spiders, the eastern tarantulas are venomous and can grow up to 6cm (2.4in) long with a leg span of 16cm (6.3in). Despite their common name, they do not eat birds, but can kill a dog with one bite, and make a human very sick.
.
Posted by The Man at 5/07/2009 No comments: 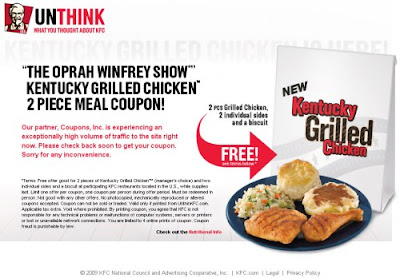 No bullshit -- it's an actual free meal from Oprah for everyone in America (see Oprah's website). Click here to print out your free KFC chicken dinner -- IF THE LINK WORKS! Oprah's free KFC giveaway has caused sit-ins! See the official National KFC Sit-In MySpace Page. ALSO SEE: Sit-In/Riot Ensues After Midtown KFC Stops Accepting Free Food Coupons! AND riots have ensued because some KFC joints refuse to honor the coupons!
.
Person wrote:
"I went over to our nearest KFC a few minutes ago...and chaos ensued. Despite the very visible grilled chicken behind the register, the manager told everyone with coupons to leave and that the promotion was over for the day. The people there are currently holding a sit-in and refusing to leave until they get their free chicken...or the cops are called. Racial epithets were being spewed, people who actually wanted to pay for chicken were facing a potential beatdown, and the manager ran from the screaming horde. Oprah, what have ye wrought?"
.
Another person wrote:
"I just returned from my lunch break hoping to use the attached coupon to score some free KFC grilled chicken at the mid town location 47 E. 42nd Street. Well I guess around 200 people also had the same idea with coupons in hand. When I finally gave up (after 30 minutes of aguing with other customers) a small RIOT started going on outside the store with people screaming at the manager while he wont let them use their free KFC coupons (issued by OPRAH)."
.
This has happened to me before and a manager of one of the local KFC told me KFC has corporate and franchised stores and the franchises stores don’t have to accept the promotional deals.
.
Posted by The Man at 5/07/2009 2 comments: