Another Tax
Air passengers are facing a new tax at India's New Delhi airport - to pay for dog catchers to trap packs of strays who chase planes.
Air traffic experts estimate that as many as five flights a day are delayed by dogs running after planes on the tarmac as they try to take off.
"In most places dogs just chase cars."
Here they like a bit more of a challenge," said one airport worker.
.
Daddy Got What He Deserved
Sexually abused killer Brigitte Harris gets 5-15 years for penis-severing death of dad
A Queens judge Friday slapped Brigitte Harris with the toughest sentence possible for killing and dismembering her father to avenge years of sexual abuse.
Supreme Court Justice Arthur Cooperman sentenced Harris to five to 15 years for the suffocation slaying of Eric Goodridge in her Rockaway apartment on July 28, 2007.
Harris admitted plotting to sever her father's penis with a scalpel by researching the case of Lorena and John Bobbitt. She wanted to prevent Goodridge, 55, from returning to his native Liberia with his granddaughters, she said.
"I never intended to kill him, and I'm sorry for his family's loss," she told Cooperman.
Cooperman acknowledged the findings of mental health professionals who agreed Goodridge repeatedly sexually abused his daughter from age 3, but he cautioned against victims taking the law into their own hands.
.
Man offers woman $4 for sex
An Ottawa man was apparently looking for cheap sex last month at a state park, according to police.
Conservation Police arrested Dale R. Charlier, 59, 1853 Post St., Oct. 22 on a complaint of solicitation of a sex act. He posted bond at the police station at Starved Rock State Park.
Conservation Police said Charlier approached a woman at 3:22 p.m. Oct. 13 at Point Shelter, which is at the eastern edge of Starved Rock State Park, offering her $4 for a sex act. After investigating, police turned their information over to the state's attorney's office. That office filed the charge Thursday.
At the time of his arrest, police issued Charlier with notice he is barred from entering the park for 90 days. The charge is punishable by as long as six months in the county jail, as long as two years of probation and as much as a $500 fine. If found guilty, Charlier would have to register as a sex offender annually for at least 10 years.
.
Posted by The Man at 11/08/2009 No comments: 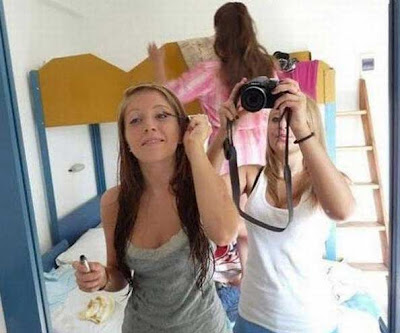 Of course you notice the bare butt of the girl in the background? 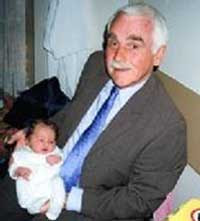 A pensioner has complained that a postal worker refused to hand over a parcel to him unless his nine-day-old baby granddaughter signed for it.
John Berry, 70, said he was startled when he was told by the worker at a sorting office that he could not pick up the package on behalf of his new-born granddaughter, Amber.
The retired man went to the depot in Cheltenham, Glos, after a postman dropped a card through his letter box to say a package was waiting for the infant.
But when he arrived he was told that only Amber could sign for it because her name was on the parcel.
“It was absolutely ridiculous,” said Mr. Berry, who was frustrated because I had many forms of identification on me, including my driving license, which proved I lived at the address on the parcel.
“He still wouldn’t allow me to take the package claiming that Amber needed to sign for it herself. I told him she was a baby but he kept persisting.”
Mr. Berry’s wife, Hazel, 65, a civil servant, said that when she complained, Royal Mail cited data protection law. “This country has gone stupid, there is red tape everywhere," she said.
.
Posted by The Man at 11/08/2009 No comments:

Hillsborough County, Florida, Deputy Kenneth Moon was alone at his station at a county jail facility near Tampa when an inmate attacked him with no warning.
Moon, 64, was no match for Douglas Burden, 24, in custody on various drug charges. With Moon still in his chair, Burden put him in a choke hold and pulled tight.
And then, surveillance video of the Monday attack showed, other inmates jumped into the fray.
But the other inmates joined the fight on the guard's side, pulling Burden away from Moon and punching him in the head. One inmate grabbed Moon's radio and called for back-up. The inmates held Burden down until other guards arrived as one of them extended a hand to help Moon up, according to the video.
Col. James Previtera, commander of Hillsborough County's Department of Detention Services, told reporters he believed that the inmates "saved the deputy's life."
"The response of the inmates in this case, I think, speaks volumes as to the fact that we treat these men and women ... in our facilities with a lot of respect," Previtera said.
Previtera said that Burden was moved to administrative confinement after the attack and that Moon was not seriously hurt.
.
.
Posted by The Man at 11/08/2009 1 comment: