Burglar cuts hole in roof, but Big Screen TV doesn't fit
police say a burglar cut a hole into the roof of TNT Vietnamese restaurant, dropped down for some loot and escaped through the same hole.
Police say the burglar got $200 from a cash register but apparently couldn't get back out of the building with a big-screen TV from the restaurant. The TV was damaged in the effort. The front and back doors remained locked.
.

Soldier thwarts bank robber
An Army staff sergeant home on leave in southwest chased down a suspected bank robber and held him until authorities arrived.
Officials say Eddie Peoples was at a Bank of America branch in with his two young sons when a man walked in with a handgun and demanded cash from the tellers. Peoples sprang into action after the man threatened his sons. Peoples left his sons inside while he ran to his vehicle to block the suspect's car in the parking lot. The suspect got out and pointed his gun at Peoples, who twisted the man's arm, stripped away the gun and slammed him to the ground. Sarasota Sheriff's deputies arrested 34-year-old Matthew Rogers.
The gun turned out to be a toy.
.
Posted by The Man at 6/03/2011 No comments:

Burglar was arrest with family help

The Meek family of discovered a car prowl in progress and then captured the suspect and held him for police.
The suspect, Schuyler Keith Paxson, 18, of , is charged with three counts of third-degree burglary. He is in the Polk County Jail today, held on $12,000 bond.
. 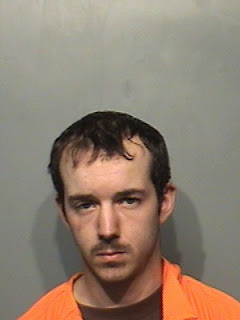 .
Police said a member of David Meek’s family spotted someone going through Meek’s car shortly before 7 a.m... The prowler reportedly made eye contact with one of Meek’s teenage children and ran. Family members gave chase, caught up with him and escorted him back to the house.
Police were told that the suspect had a bag over his shoulder when he ran. Officers looked through yards in the area and found a bag. They later discovered there were other victims in the area. At last report there were three police cases associated with Paxson’s arrest.
.
Posted by The Man at 6/03/2011 No comments:

WARNING:
Some of the photos and text in this blog maybe offensive, disturbing and repugnant to some viewers!
View At Your Own Risk
.
Posted by The Man at 6/03/2011 No comments: