Canoga Park - Los Angeles police today busted a sophisticated marijuana farm inside an industrial building 25 feet from the back door of the Topanga Community Police Station.
About a week ago, officers smelled marijuana coming from the building at 8411 Canoga Ave., just a few feet from the station at 21501 Schoenborn St., said Officer Karen Rayner of the LAPD's Media Relations Section.
They notified the narcotics unit which started an investigation.
"They noticed that traffic in and out of the building was very minimal. The ventilation had also been upgraded. The utility bills were disproportionately higher. The rooms in the building were filled with hydroponics equipment," Rayner said.
Rayner said the farmers had also "gone to great lengths to filter the air coming out of every hole that might leak to the outside." She said that all the places where the smell might have come had been plugged with liquid caulking stuff.
"But it was not enough," Rayner said. "Their luck ran out."
Three suspects were still being booked so their names could not be released, Rayner said. The amount of marijuana in the building had not yet been tabulated.
A warrant was served in the building about 3 p.m. Detectives estimated the operation had been going on for about eight months, Rayner said.
VIDEO
..
Posted by The Man at 11/19/2009 1 comment:

Woman uses a Shrine as Bank 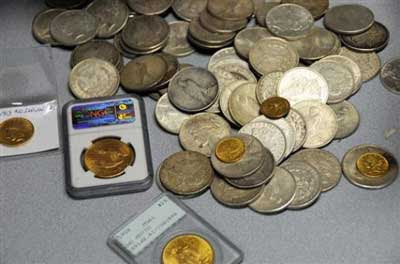 A woman quietly left $40,000 worth of rare U.S. coins near a Catholic shrine for safekeeping so the Virgin Mary could watch over her life savings while she was out of town, and apparently it worked: The money was returned to her when she got back a week later.
Operators of the National Shrine Grotto of Our Lady of Lourdes near Emmitsburg thought they had been blessed with a big donation when a groundskeeper found the two plastic freezer bags filled with gold and silver while raking leaves.
But Shrine Director William Tronolone said the woman approached him after a noon Mass Sunday, six days after the discovery, to ask whether anyone had found some coins she had hidden beneath fallen leaves at the site on the campus of Mount St. Mary's University.
"I said, 'Why did you leave it there?' And she said, 'Well, I had to go away and I was afraid to leave it and I wanted the Blessed Mother to watch over it for me — and evidently she did because you found it,"' Tronolone said.
By then, university officials had had the coins appraised, notified police and placed the money in a safe while awaiting word from investigators.
Tronolone refused to identify the woman. He said she had been out of town about a week.
.
Posted by The Man at 11/19/2009 No comments:

Nobody was injured when a crane smashed through a house in northwest
Santa Rosa in a failed attempt to remove an oak tree.
.

Woman demanded to be arrested at Cumberland County Prison
An intoxicated Carlisle woman went to the Cumberland County Prison on Monday and demanded to be arrested "so she could help the prisoners inside," police in Middlesex Township said.
Police said Janet L. Ritter, 67, pulled into the prison parking lot at 4:19 p.m., locked her car and left the headlights on, then went to the jail's front door and demanded to be admitted.
When a corrections officer told her she couldn't come in, Ritter grabbed his shirt and tried to push past him, police said.
While she didn't get into the prison, police said Ritter was charged with drunken driving, public drunkenness, disorderly conduct and trespassing.
.
Man carrying $600 stole a pencil
Police have arrested a man after he allegedly stole a pencil from a Bellingham store even though he was carrying $600 in cash. The man, 44, was booked into the Whatcom County Jail after police learned he had an outstanding warrant from Everett.
Officers questioned the man about why he stole the mechanical pencil, worth $5.99, when he had enough money to pay for it. Police said the suspect just responded: "I don't know, being stupid I guess."
.
Soldiers Given Onions, Garlic to Fight H1N1 Flu
Moldova's army is feeding its soldiers onions and garlic to help them ward off swine flu.
Defense Ministry chief doctor Col. Sergiu Vasislita says about 0.9 ounces (25 grams) of onions and 0.5 ounces (15 grams) of garlic will be added to each soldier's daily diet. That roughly corresponds to a small onion and a couple of garlic cloves.
Onion and garlic are traditional remedies in Moldova where they are widely believed to boost the immune system.
Vasislita said Thursday that the measure was taken after 24 soldiers fell sick with swine flu in the past two weeks. More than 1,000 Moldovans have swine flu with 90 new cases reported daily.
About 6,500 troops serve in the army of Moldova, a small former Soviet republic bordering Romania and Ukraine.
.
Mail carrier found drunk, eating noodles
Police in Marion, Iowa and postal authorities are investigating the case of a mail carrier who was allegedly found drunk inside a residence while on the job.
Police said the postal worker, 46, was charged with public intoxication Nov. 3 after she was found sitting on the kitchen floor of 95-year-old woman's house, eating leftover noodles from her refrigerator.
Police Lt. Steve Etzel said Tuesday that the woman apparently entered the home through an unlocked front door. He said she was in uniform and had mail and a mail-carrying bag with her.
The woman, a 17-year employee of the U.S. Postal Service, was taken to the Linn County Jail. Marion Postmaster Rick Leyendecker said the woman is currently on unpaid leave.
.
Did cook spit in police chief's burger?
Man could get up to 10 years in prison if convicted
On the first day of the trial of a cook accused of spitting on a hamburger served to the Burnet police chief, jurors heard a recording of what Jaime Perez told an officer: "I did it," Perez said on the recording. "That ain't no lie."
However, Perez's attorney, Tim Cowart, said during the trial Monday that there was no physical evidence against his client. All the prosecution has, Cowart said, is that Perez "mouthed off" to a few people.
Perez is charged with harassment of a public servant, a felony punishable by up to 10 years in prison. The prosecution presented its witnesses Monday and played the tape of Perez telling a Burnet police officer that he tampered with Chief Paul Nelson's burger in October 2008 at local restaurant Andy's Landing.
PICTURE
.
Posted by The Man at 11/19/2009 No comments: