Traffic in the downtown core slowed to a halt today after a car leaving Hanson Memorial Parking Garage sped up and crashed into the wall of the building across the road.
The accident occurred this afternoon. The male driver, the only person in the vehicle, was taken to hospital with non life-threatening injuries.
.﻿ 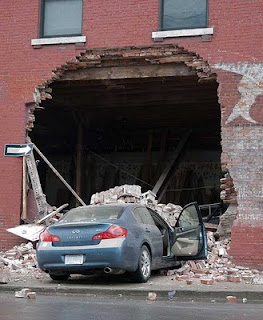 Parking attendant Ed Harpell said the man paid his parking ticket and was approaching the sidewalk. There were two pedestrians on the sidewalk, he said, and the driver nearly hit them.
"I think maybe he tried to break, and then he hit the accelerator and he just shot right across the street," Harpell said.
Police arrived on the scene quickly, and secured the area. City engineers are currently investigating the struck building at 166 Wellington to ensure it is structurally sound.
.
Posted by The Man at 4/03/2011 No comments:

Toddler craving fries found at Wal-Mart
A area toddler has been reunited with his mother after apparently stepping out for a bite to eat.
The 2-year-old from was found in the parking lot of a Wal-Mart wearing only a white T-shirt and diaper around 3 a.m. Thursday.
police Sgt. Maria Munayer says he told investigators he wanted McDonald's french fries. There is a McDonald's inside the Wal-Mart.
The boy appears to have awoken in the middle of the night, opened the front door of his apartment and headed out, crossing four lanes of a usually busy thoroughfare. Police say the knob on the front door is set low and automatically unlocks the deadbolt.
His mother called 911 when she awoke around 6 a.m. to report her child missing.
Police say there is no basis for any criminal charges against his mother.
.

April Fool's prank costs teen $150 in tickets
A 16-year-old girl has been given $150 in tickets after the worried victims of her April Fool's Day prank called police.
Authorities say the girl texted her friend and cousin Friday morning and said she'd been robbed and shot in the foot.
The pair called police, who rushed to a home where they found the 16-year-old safe. She hadn't been robbed or shot.
The girl received a $100 ticket for disorderly conduct and a $50 ticket for truancy because she wasn't in school Friday.
Police say she could have been criminally charged with filing a false police report.
police spokesperson Dave White says the friend and cousin did the right thing by calling police. They haven't been cited or charged.
.

Man finds it difficult to sell ferry
A man who bought a used 300-foot Staten Island Ferry to convert it into a waterborne dorm for college students is drowning in a bad case of buyer's remorse.
Former marina owner Jacques Guillet bought the orange ferry for $162,000 at a closed-bid auction three years ago.
But he's failed to find an affordable parking spot along the area's waterfront for the 3,500-passenger boat, named the Gov. Herbert H. Lehman. The city wanted to charge him $1,000 a day.
Now he's paying $6,000 a month to dock it in Staten Island. Any buyer would need to deal with complicated logistics, including the boat's size.
There were no bids when he advertised it on eBay.
.

Police arrest man who escaped by fax
Spanish police say they have arrested a man who twice escaped from custody by having his wife send fake faxes ordering his release.
Fifty-seven-year-old Jose Carlos Serna was taken into custody at his home in San Lorenzo del Escorial, a suburb north of , on Friday, while hiding in a hollowed-out sofa, police said.
In December, he was in a cell at Arganda del Rey courthouse awaiting trial when officers got a fax purportedly from a regional court. It was followed by a phone call purportedly from a court official, corroborating the release order.
Authorities tried to verify the order, but their calls went unanswered. When a second call was received confirming Serna's release, he was freed to a waiting taxi.
Police said Serna used the same trick to escape from Valdemoro jail in October.
.
Posted by The Man at 4/03/2011 1 comment: