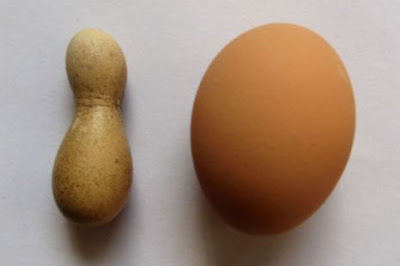 A man in China was amazed when his chicken laid a bowling-pin shaped egg.
Zhang Yunfeng, 75, from Jize in northern China’s Hebei Province, heard one of his ten hens clucking and rushed to the scene.
He explained: ‘When I arrived I saw she produce a bowling-pin shaped egg. It's the first time I saw such a weird shaped egg.’
It might be the first time Mr Yunfeng has such an egg, but here at Metro we’ve seen it all before.
.
In March last year a mother of three from Northamptonshire, 43-year-old Natalie Wiltshire, was equally shocked when one of her chickens laid an incredibly similar egg.
At the time she said: ‘I’ve done a bit of research and there’s nothing to suggest you should ever get eggs in this shape.’
But with the appearance of another bowling-pin egg, is the phenomenon perhaps more common than we might think?
Experts have claimed many things can lead to strange shaped eggs, including ovulation problems, hormonal imbalances and eating the wrong kind of food.
So keep your eyes peeled, eight more and we’ve got ourselves a game.
.
Posted by The Man at 3/13/2011 No comments: 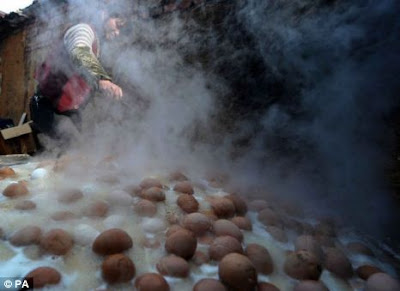 Eggs hard boiled in children's urine could be about to sweep the world if a small corner of China has anything to do with it.
Traditional chefs in Dongyang, Zhejiang province, eastern China, are trying to convince everyone that they're really not just taking the pee.
Spring eggs hard boiled in children's urine have been a treat in this part of China for thousands of years and now culture officials want to take it worldwide.
Chef Lu Ming said: 'The urine is gathered from local schools and the very best comes from boys under 10 years old. They pee in buckets and we collect it fresh every day,'
Then the eggs - which have official cultural significance status - are boiled in the wee, first with their shells on and then with them off for a day and a night before they're ready to be eaten.
He said: 'The eggs are delicious and healthy. They stop fevers and can help you concentrate if you're feeling sluggish or sleepy.
'We are having a big export push because we want people outside China to fully appreciate the delicacy of our cuisine.'
Posted by The Man at 3/13/2011 No comments:

Two arrested in attempted alligator theft
Two spring breakers tried to steal alligators from a restaurant in the Florida Panhandle with raw chicken as bait, authorities say.
An employee of the Fudpucker's restaurant in Destin, Florida heard the students "yelling outside the gator area" and found one of them pulling on a rope.
Patrick Trice, a University of Alabama student, and Charles Liston, from the University of West Georgia, were booked into the Okaloosa County Jail for burglary to an occupied structure and larceny, both felonies.
The students, both 20 and from Carrollton, Ga., were in Destin on spring break with a group of friends.
.
Man protest slow service with a gun
A man in Orlando, Florida decided to let employees at a Denny's restaurant in Florida know he was unhappy about delayed service by firing three shots outside the door, police say.
Frederick Louis Sims, 31, of Orlando was arrested near the restaurant. Police officers said they found a small quantity of marijuana and a .22-caliber Ruger pistol in Sims's Cadillac Escalade.
Sims was being held in lieu of $2,600 bail on charges that include possession of the marijuana and firing a weapon in public.
The Ruger was seized by police. Investigators said it had a cartridge in the chamber and four in the magazine.
.
Woman goes to court with tiny monkey in her bra
A woman from Amherst, Va. turned a few heads when she walked into a Virginia courthouse with a tiny monkey clad in a pink-and-white dress tucked in her bra.
The woman brought the palm-sized marmoset to Amherst County Courthouse for a hearing in Juvenile and Domestic Relations Court. Officials apparently didn't notice the monkey until the woman went to an office to complete some paperwork.
The woman says she bought the animal on an online auction site. The marmoset is 7 weeks old and requires constant attention.
.
Posted by The Man at 3/13/2011 No comments: