London street cell phone texting injuries
.
What's wrong with talking?
With everything at a faster pace today why text you message?
.
MinionsWeb said...
Aw,come on, that was so fake. You want us to believe they are so insipidly stupid in London that they padded posts for morons who walk into them?
Please note that 3 of the people shown were in multiple clips, at least half the clips were obviously staged (the person(s) made a point of moving into the obstacles.)
Posted by The Man at 11/03/2008 No comments:

Want to know the meaning of life?

Just call the 24-hour philosopher-in-a-van
Don't even think about it, call us instead!
The always-on-call philosophers, ready to answer any question 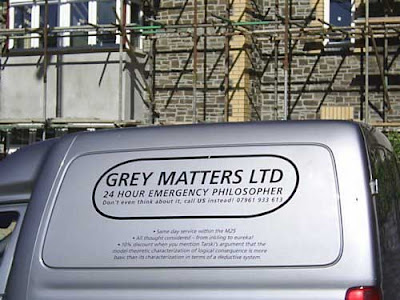 How come this never happens to me? 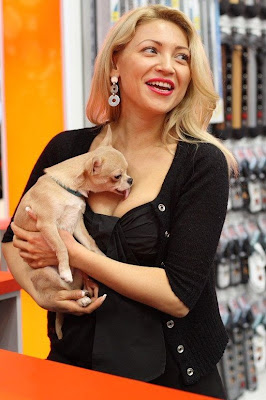 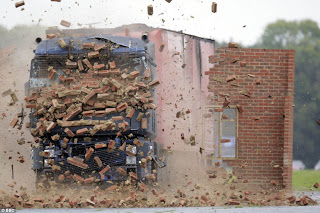 Mr Clarkson has a notorious appetite for destruction.
But after emerging in 'screaming agony' from this latest horrifying escapade, perhaps Jeremy Clarkson has had his fill.
These spectacular pictures show how the presenter deliberately crashed a truck into a wall at high speed for his latest daredevil Top Gear stunt.
I emerged from my high speed head-on impact in what can only be described as screaming agony.
'I couldn't walk. I couldn't talk. I couldn't think.
More Pictures and More
.

Dumb and dumber? Man Tricks Intruders
A Halifax resident outsmarted two men who kicked in the front door of his Chebucto Road apartment at about 3:30 a.m. Saturday and demanded cash.
The man told the intruders he did not have any money but offered to go to a bank machine to get some.
They agreed and waited in the apartment while he left and called police.
Halifax Regional Police said two men, 51 and 53, were arrested and will be charged with break and enter and robbery.
.
Paper Boy Steals Truck to Speed up Deliveries
Police say a Logan, Utah, paper boy wanted to make short work of his route and stole a neighbor's pickup truck to make his rounds.
The 14-year-old boy ended up crashing the vehicle into a house on his delivery route.
The house sustained only minor damage, but police summoned the boy to appear in juvenile court for various offenses.
The Herald Journal of Logan says the paper boy -- one of its own -- returned the pickup truck to his neighbor's driveway after the crash, then went to school like nothing had happened.
.
I also used a car of a friend that live a block away to deliver newspapers when I was 14 but I never got into a accident. What was so weird the guy said there was always more gas in the tank each morning and I never put any gas in the tank.
.
'Ghost car' racks up tickets
Chicago police say they are investigating how a 1992 Chevrolet Lumina racked up nearly $4,000 in tickets in the year after it was presumed crushed.
Cheryl Thomas said the police became involved after notices seeking payment for nearly $4,000 were mailed to her home in Alsip.
"The police told me the car was destroyed, but it's still moving around," said Thomas, whose son, Gene, owned the car until it was impounded last year and ordered crushed by police after he failed to pay $500 in storage and towing fees.
During the next 12 months, toll cameras photographed the car nearly 200 times as it breezed through tollbooths without paying a cent.
Untangling the car's recent history has been difficult with police reporting the car was crushed, not crushed, sold, then not sold, the Sun-Times reported, noting police say the car currently is undriveable and sitting in a city-owned lot.
.
I'm proud to be a 36-year-old virgin
Charlotte Baird's family are perplexed and bemused. They cannot fathom why on earth she is so determined to remain chaste until the day she marries.
She decided she would 'wait' when she was just 11 years old, but, well, that was quite some time ago.
Today, at 36, Charlotte is still a virgin; she hasn't so much as even kissed a man.
She is aware that she is a curiosity - and admits herself that celibate people in today's modern world are viewed with suspicion, dubbed anything from freaks to a 'challenge'.
So what is it like being celibate? Doesn't she wonder what it's like to have sex? And why, as her mother asks her from time to time, does she go on with it?
'The reaction when I tell people my beliefs is usually one of bemusement,' says Charlotte.
'I think my age shocks people more than anything else.
Picture and More
.
MinionsWeb said...
I'm proud to be a 36-year-old virgin
OMG - She is Howdy Doody! No wonder.
.
Paramedic accused of stealing from patient
Cops arrested a Pasco County paramedic accused of stealing money from a patient's wallet while transporting the man to a hospital.
Joshua Vitori, 26, was arrested on a charge of grand theft.
The Pasco County personnel director says he plans to resign from his job today.
Here's the story: Vitori went by ambulance to a home in Zephyrhills, where a man was having chest pains.
The man's wife handed his wallet to a paramedic to retrieve his insurance card.
A few minutes later, the man was asked for a list of medications and was handed his wallet back, the report says.
That's when he discovered the money — $300 — missing.
Poor patient got taken for a ride.
.
Hole in one - on wrong hole
A Devon golfer is the talk of the clubhouse after hitting a hole in one - on the wrong green.
Clive Seymour, 74, was aiming for the par-four 265-yard tenth hole but sliced his drive, reports The Sun
Back on the 330-yard fourth hole, players were bemused as the ball cleared trees, thudded on to their green, and tricked into the hole.
Grandfather of six Clive said: "It's a great feeling, even if it was in the wrong hole. I used a driver but I really sliced it."
The retired shopfitter is still the toast of Hele Park Golf Club, in Newton Abbot, Devon.
Manager Wendy Stanbury said: "It was the talk of the clubhouse. Holes in ones always are but this one was a bit special - we've never had this happen before.
"Unfortunately the ball was out of bounds and he had to replay the shot. But Clive was still chuffed. He has set an interesting club record - the only hole in one in the wrong hole."
.
One-armed golfer's hole-in-one
A West Midlands golfer scored a hole in one - despite having only one arm.
Phil Bell, 45, used his "backhand swipe" for the 184 yards, par three fourth hole, reports The Sun.
The dad of two, who lost his right arm seven years ago when his lorry crashed, said: "I knew I'd hit the ball well.
"But at the green I couldn't see it and assumed I'd over hit it. Then one of the chaps went white with shock and said, 'Look in the hole'."
Playing pals verified the shot at Warley Woods near his home in Oldbury.
.
Posted by The Man at 11/03/2008 No comments: