The pizza is created under the direction of
Mr. Matsuba of the Insect Cuisine Eating Association.
.
.
Posted by The Man at 7/24/2009 No comments: 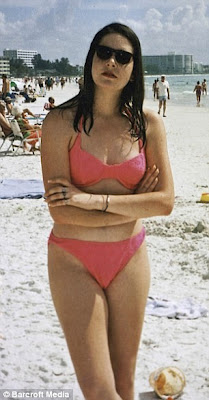 Woman Stands 6-Feet, 6-Inches; Weighs 476 Pounds and Still Growing
A woman suffering from a rare hormonal disorder stands 6-feet, 6-inches, weighs 476 pounds and is still growing, the Daily Mail reports.
Tanya Angus is believed to be one of the tallest and heaviest women on the planet and doctors say her condition cannot be stopped by medication.
Angus, lives in Nevada and suffers from a condition known as acromegaly, also referred to as gigantism.
At 20-years-old, Angus stood 5-foot, 11-inches and weighed just 115 pounds, but her height and her weight soon started to spiral out of control.
Her doctor diagnosed her with gigantism and she was sent to a specialist.. 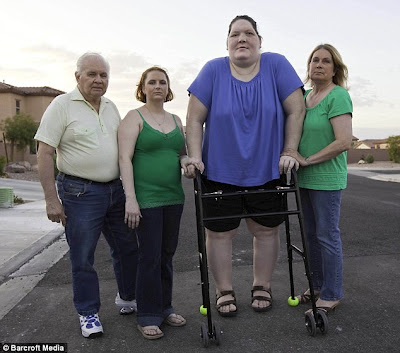 Labels: In The News, Pictures, WTF?

Come and Arrest Me
A woman from Albany, Oregon who called police to complain that neighbors were harassing her for having sex with a teen was arrested on charges she had sex with a 13-year-old, police said.
Albany police said they were called by Arlayne Cheryl Curiel, 24, on Saturday because her neighbors were harassing her about having sex with a 13-year-old.
Police investigated and determined that Curiel met a 13-year-old boy walking in downtown Albany on Friday and later that night he went to Curiel's home at 2337 SE Salem Ave.
Curiel gave the boy alcohol and they both went to an unoccupied house next door, where they had sexual contact, police said
Police arrested Curiel on charges of first-degree sex abuse, second-degree sodomy, second-degree rape, first-degree burglary and furnishing alcohol to a minor.
.
Sex Assault Charges Filed Against 4 Boys
Prosecutors in Phoenix filed sexual assault charges against four boys ages 9 to 14, officials said Thursday, alleging they brutally attacked an 8-year-old girl after luring her to a shed with chewing gum.
Police said the girl's parents criticized her after the violence, blaming her for bringing shame on the family. All five children are refugees from the West African nation of Liberia.
The boys held the girl down while they took turns assaulting her, police said.
"She was brutally sexually assaulted for a period of about 10 to 15 minutes," police Sgt. Andy Hill said, calling it one of the worst cases the department has investigated.
The 14-year-old boy was charged Wednesday as an adult with two counts of sexual assault and kidnapping, the Maricopa County Attorney's Office said. He is being held without bond.
The other boys — ages 9, 10, and 13 — were charged as juveniles with sexual assault. The 10- and 13-year-old boys also were charged with kidnapping, the office said Thursday.
Authorities said the victim was in the care of Child Protective Services after her parents blamed her for the rapes and bringing shame to the family.
"The father told the case worker and an officer in her presence that he didn't want her back. He said 'Take her, I don't want her,"' Hill said.
Hill cited the family's background as the reason the family shunned the girl.
In many parts of Africa, women often are blamed for being raped for "enticing" men or simply being in the wrong place at the wrong time. Girls who are raped often are shunned by their families.
.
Bee My Wife
A Chinese couple have got married wearing clothes made of thousands of living bees.
I put a queen bee on each of us but the only thing is it was impossible to count how many bees we had - I don't know if a guess is enough?"
Li Wenhua and Yan Hongxia are both enthusiastic beekeepers and work for the Nanhu forestry commission at Ning’an city in northern China.
And despite the fact that most of their pals kept their distance, the couple were still delighted with their new clothes.
Husband Li said: "I have been working with bees for two decades and it was the obvious choice for us for our big day.
"I also wanted to set a world record for the biggest coat of bees - I put a queen bee on each of us but the only thing is it was impossible to count how many bees we had - I don't know if a guess is enough?"
His wife added: "It was an amazing feeling to have a carpet of living bees moving over my body.
"I could feel them as they moved around - it was amazing. I have always loved bees but this was a totally new experience."
PICTURE
.
Couple locked in historic prison
A retired prison officer and his wife became a historic jail's first inmates in nearly a century when they were accidentally locked in by staff.
Norman Bradshaw, 64, and his wife June, 63, from Scunthorpe were visiting Ruthin Gaol while on holiday in Denbighshire when staff closed up early and went home.
The couple were still exploring the grounds while listening to an audio tour and finally arrived at the souvenir shop to find it deserted with all the windows and doors locked.
Mr Bradshaw, from Scunthorpe, asked staff if they had time to do the tour, when they arrived and was assured that they did.
"My wife and I went into the shop to buy mementoes of the visit and found that not only were we on our own, but in fact we were locked in the Gaol with no visible means of escape in sight," he said. "The brochure says a visit to the Gaol is a grueling experience, and in this case it was."
.
Posted by The Man at 7/24/2009 No comments:

The Wonderful World of Prison Inventions

Someone once said that necessity is the mother of all invention. 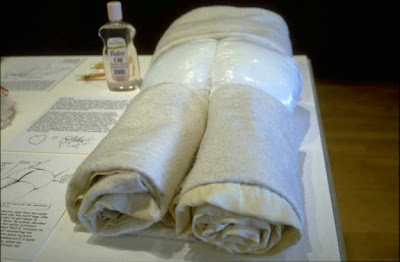 Handerpants - The Underpants for Your Hands! 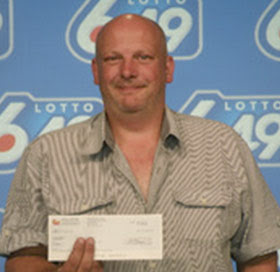 The good news: Barry Shell won more than $4 million. The bad news: he ended up in jail.
Shell, from Brampton, Ont., picked up a check for $4,377,298, the top prize in the July 18 draw for the Lotto 6/49.
"I went to the store and checked my ticket on the self-serve ticket checker," Shell was quoted as saying in a news release from the Ontario Lottery and Gaming Corporation.
"As soon as I saw how much I had won, I grabbed a pen and signed my ticket."
On Monday afternoon, a smiling Shell was photographed holding up his check at the OLG headquarters on Dundas Street West in Toronto.
Then Shell strolled out of the building and into the hands of Peel Regional Police officers.
He was wanted on a six-year-old warrant for failing to appear, theft under $5,000 and possession of property obtained by crime.
According to a spokesman for the OLG, every lottery winner undergoes a security check, and if anything is turned up during the course of the investigation the matter is turned over to the Ontario Provincial Police.
.
Posted by The Man at 7/24/2009 No comments:

The extraordinary saga began on the afternoon of Wednesday, July 15 when a scenes-of-crimes officer in a unmarked police silver Peugeot 206 arrived at Eureka Place, Trinity Road, to follow up an investigation. The plain clothes woman officer left the car near the Pheasant pub, but it was outside the marked bays despite signs forbidding this and warning of 24-hour clamping and £200 charges.
PCS workers immobilized the car and when this was discovered uniformed officers were called in to help. The company says officers phoned them and told them to immediately free the car. When PCS refused, a uniformed policeman set about trying to open the clamp with a pair of bolt croppers. The police say they are taking action against PCS.
Chief Inspector John Frayne said in a statement: "The company refused to remove the clamp and subsequently the vehicle was recovered to Ashford police station. The clamping company have since removed the clamp and the matter is subject to legal proceedings."
.
.
Posted by The Man at 7/24/2009 1 comment:

Camel Hit by Car-Calmly Walks Away 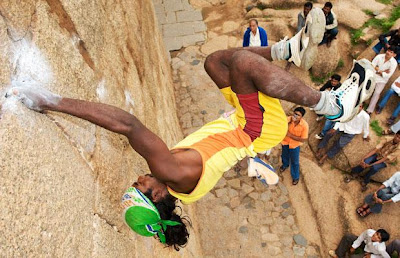 The daredevil climber is a hero in India wowing crowds by scaling heights of up to 300ft without
a harness.
22-year-old discovered his climbing ability four years ago working on one of the county's notoriously dangerous building sites. And after teaching himself by watching monkeys climb trees, Jyothi has enhanced his dazzling agility using stunts from his favourite films. He even copies some of Spiderman's best moves, hanging upside down and jutting out at a 90 degree angle. 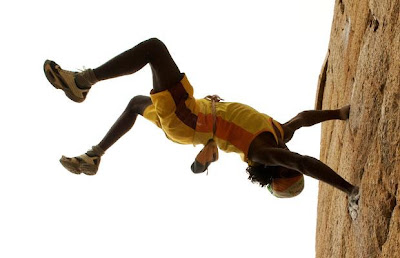