He is showing off for a crowd of people until he loses his balance and falls off watching his bike crash into a car.

This is a classic prank, a guy covers the toilet with Saran wrap and sets up a camera in the bathroom to record his brother.
Look at the piss stain he left! 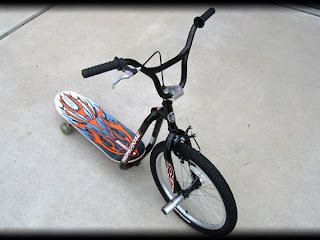 The Mongoose BikeBoard is designed to stand alongside the fun and skill of the Surfboard, Skateboard, Snowboard, and the Wakeboard.
It provides a platform for those riders who have never before been able to experience the sensation of riding these other board platforms, to get similar sensations and excitement it develops coordination and is great for exercise.
.
Mongoose BikeBoard™
Posted by The Man at 8/04/2008 No comments:

The brain continues sending electrical wave signals for 37 hours after death
The average length of an orgasm for a pig is 30 minutes.
Dueling is legal in Paraguay as long as both parties are registered blood donors.
An average person farts 16 times a day
Coca-Cola contained Coca (whose active ingredient is cocaine) from 1885 to 1903.
On average, the Pentagon uses 666 rolls of toilet paper in one day.
The Declaration of Independence was written on hemp (marijuana) paper.
It only takes 7 pounds of pressure to rip your ear off
Posted by The Man at 8/04/2008 No comments:

Extreme Caterpillar Breakdance
Posted by The Man at 8/04/2008 No comments:

I think he regrets the decision.

Would you let someone tazer you for $100

Driver with naked woman cited for running red light
A driver distracted by a naked woman in her back seat ran a red light and caused a five-car wreck.
A 2003 Acura driven by Teah L. Limitone, 22, was traveling north in the middle lane of Seminole Boulevard about 8 p.m. She ran the light at Seminole and Park Boulevard and hit a 2000 Saturn that was trying to turn left from Park onto Seminole Boulevard. The Saturn spun 180 degrees.
The Acura, still headed north, was pushed into the southbound lanes on Seminole. The Acura slid between two cars that were in the southbound turn lanes on Seminole and then hit a fourth vehicle before stopping.
"There was a naked female in the back seat," Pinellas County sheriff's spokesman Jim Bordner said. "She was changing clothes in the back seat."
Bordner said Limitone told the deputy she heard a moan or a groan and turned to see the passenger, Ayla Gabriel. That's when she ran the light.
.
Man Calls 911 Over Incorrect Sandwich
An unhappy Subway customer called 911 not once, but twice to complain to police that his sandwich was not made to his liking.
Reginald Peterson called the Jacksonville Sheriffs Office in hopes that police could have his sandwich made to his satisfaction.
A short time later, Peterson contacted JSO again to complain that police still had not shown up.
When police did arrive Peterson told the officer he had ordered two sandwiches, checked out, and then walked outside to find the subs did not have "everything" he ordered.
He told police he became "very upset" and "belligerent" because the employee making the sandwich was not doing it correctly.
.
Son at last for woman aged 70
A woman has become the world’s oldest mom at SEVENTY by giving birth to twins.
Frail farmer’s wife Omkari Panwar had the boy and girl after undergoing IVF treatment because she and her husband had been desperate for a son.
The tots, each weighing 2.6lbs, were whisked to incubators at a specialist hospital before their mom woke after the Caesarean operation — but doctors said they were healthy.
Omkari added: "If I am the world’s oldest mother it means nothing to me. I just want to care for my new babies while I am still able. We have got an heir — that is all we ever wanted."
PICTURES and More
.
Man to be a grandad at age 30
Dad-of-three Ged Fulton was just 14 when he became a dad.
But now his 15-year-old son Sean is expecting a tot with his 18-year-old lover.
And Ged will be 30 when the baby is born in November, making him one of the youngest grandparents in the world.
PICTURE and More
Posted by The Man at 8/04/2008 No comments: